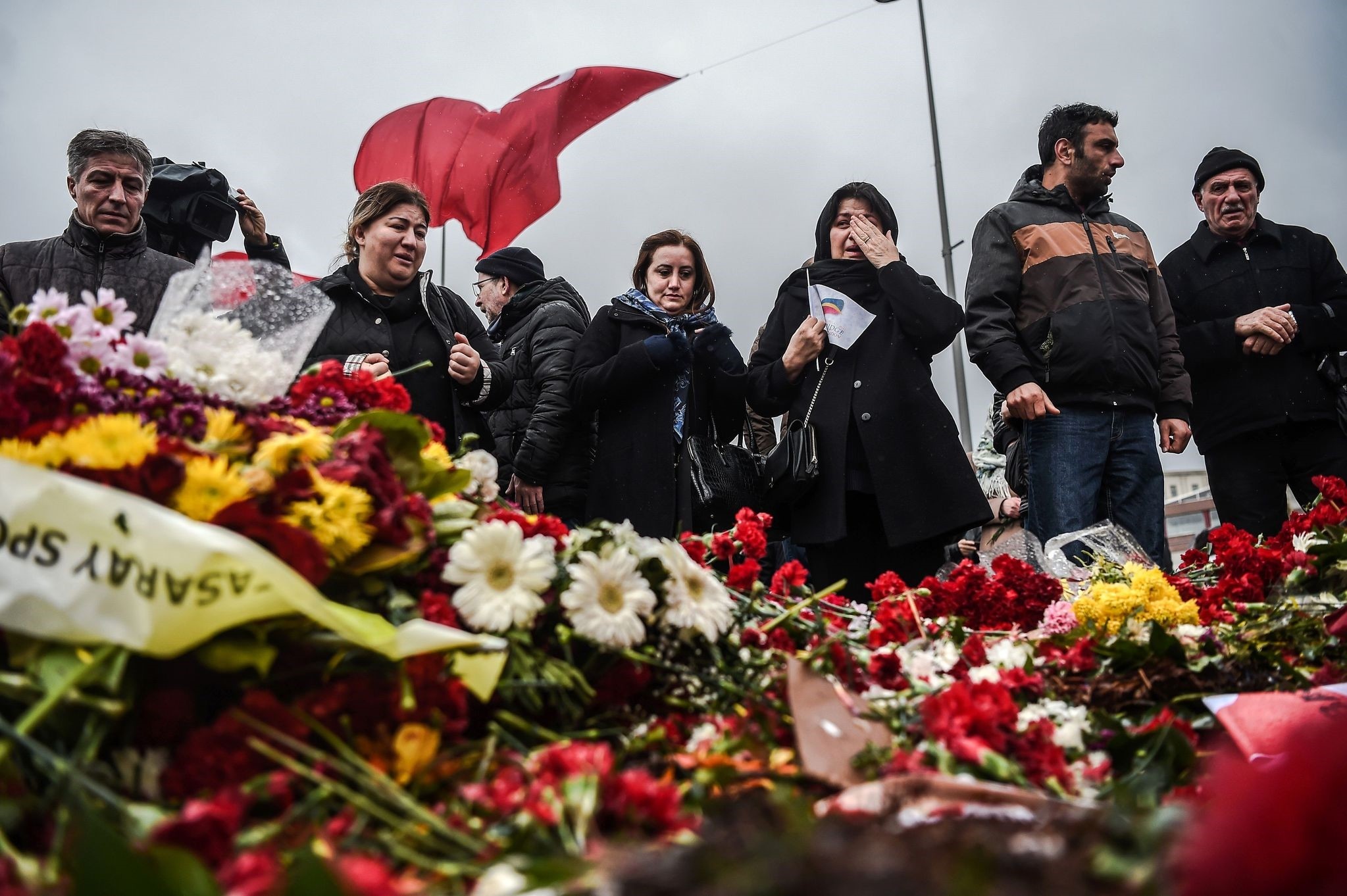 People lay flowers for the victims of the Dec. 10 blasts outside Beu015fiktau015f Vodafone Arena football stadium Tuesday.
by Burhanettin Duran Dec 14, 2016 12:00 am

On Saturday evening, the PKK perpetrated two deadly attacks in Istanbul as part of their urban terror strategy. While 44 innocent people lost their lives, the Turkish people responded to the heinous assault with a clear message that they would neither bow to the terrorists' fear tactics nor turn against each other. Instead, they would keep fighting until the threat is neutralized.

The people's resolve and determination echoed their brave response to the July 15 coup attempt. It was a sign that Turkey would never be like Syria or Egypt, where heavily armed thugs call the shots.In the wake of the Istanbul massacre, European governments and world leaders were quick to issue statements expressing their sympathy and offering their condolences to the Turkish people. Their words, however, are not enough to keep a lid on the population's frustration with Western governments – who are widely believed to have launched a secret war against Turkey. There was a time when such claims would have been dismissed as conspiracy theories. Then people watched Washington outsource the war on terror to the People's Protection Units (YPG), the PKK's Syrian franchise, while policy makers in Brussels and Berlin give carte blanche to the PKK to recruit new suicide bombers, raise money and plan attacks against Turkish citizens. Today, there is a strong sense among Turks that the United States and European governments are using terror attacks to twist Turkey's arm to get what they want. Another popular view is that the West is fighting a proxy war against Turkey through the PKK and the Gülenist Terror Group (FETÖ) – terrorist groups that continue to freely operate in Europe and the United States.

Here's where the vast majority of Turks stand today: Western governments not only refuse to contribute to Turkey's counterterrorism efforts but actively enlist the services of certain armed groups to keep the country in line. Western media's love affair with mostly European foreign fighters among YPG ranks in Syria only makes things worse. With The New York Times praising the PKK for supposedly promoting gender equality and Chase Winter, a Deutsche Welle reporter, praising the Istanbul bombings on social media, people cannot help but wonder why Westerners would support the PKK, which they themselves consider a terrorist organization. Why is "Islamic terrorism" bad while "secular terrorism" is praiseworthy?

No matter where you stand on the West's relationship with terrorist groups, there is no denying that Turks are turning away from Europe and the United States because they cannot trust their self-proclaimed allies.

When Western governments helped undermine – whether through inaction or covert support for authoritarian regimes - the Arab Spring and turned a blind eye to the Syrian regime's atrocities, it looked like they did not believe that Muslims were entitled to democracy and human rights. The West's reputation took another hit with the rise of populism, xenophobia and anti-immigrant movements – which basically argued that "universal values" only really applied to white people. Today, the West's refusal to allow its allies to protect themselves and combat terrorism represents the final nail in the coffin of its credibility.

To be clear, this is not just about Turkey either. By backing terrorist groups killing Turkish citizens, the West is essentially telling more than 1 billion Muslims that the only standards left are double standards.

Burhanettin Duran is General Coordinator of SETA Foundation and a professor at Ibn Haldun University. He is also a member of Turkish Presidency Security and Foreign Policies Council.
Last Update: Dec 14, 2016 1:57 am
RELATED TOPICS