Next stop: Raqqa and Manbij 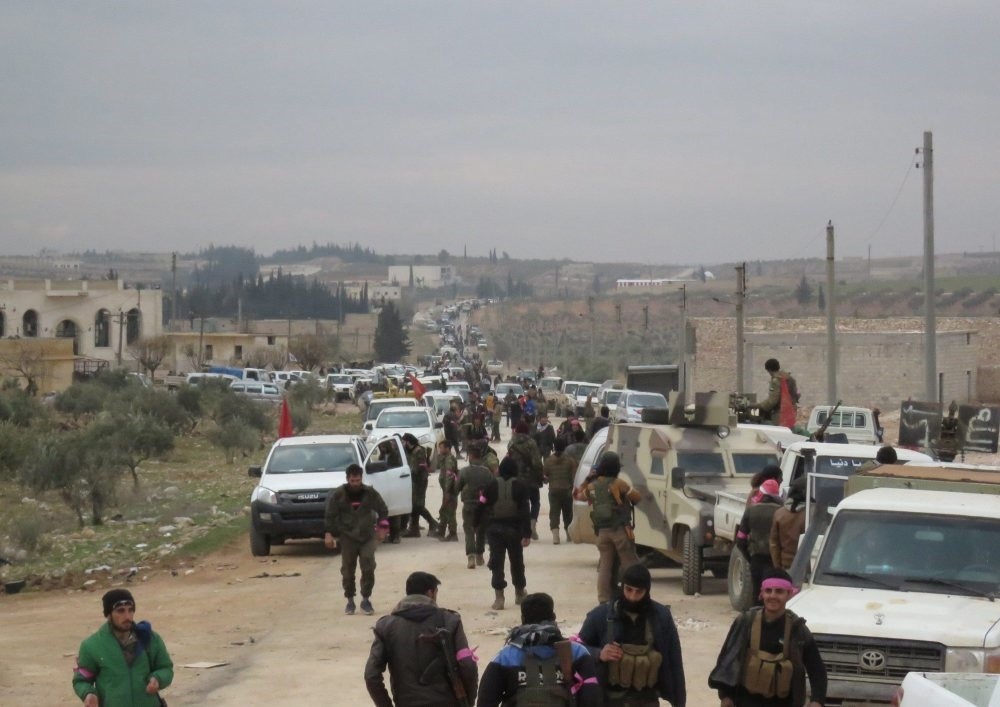 The Turkish military-backed Free Syrian Army (FSA), which is carrying out the counterterror offensive against the terrorist groups in Syria, is standing in the western al-Bab region, Feb. 11.
by Burhanettin Duran Feb 15, 2017 12:00 am

Turkey's decision to extend its existing offensive in Syria is quite audacious, but it has no choice other than to assume its active role in the Syrian civil war, which is the root cause of many problems in the Middle East

On Sunday, President Recep Tayyip Erdoğan held a press conference in Istanbul before leaving on a three-country tour of the Gulf. In response to a question about the objectives and limits of Turkey's Syria policy, he stated that al-Bab was about to fall and announced that the Free Syrian Army (FSA), backed by the Turkish military, would march against Raqqa and Manbij next.

After all, Operation Euphrates Shield's stated goal has been to remove terrorist groups, not just Daesh, from northern Syria. Moving forward, Turkey will seek to set up a 5,000-square-kilometer safe zone in the area and enforce a no-fly zone. In addition to training a national military force in northern Syria, Turkey want to shelter civilians from violence.

To be clear, there is no doubt that Erdoğan's plan, which he reportedly shared with the United States, Russia and Germany, is quite audacious. But it is important to understand that Turkey has no alternative to assuming an active role in the Syrian civil war – which has been the root cause of many problems that the NATO ally has faced in recent years.

Moving forward, Ankara will have to coordinate its actions on the ground with a number of stakeholders – especially Russia and the United States. At this time, Erdoğan believes that the Trump administration and Russian President Vladimir Putin can work together to defeat Daesh. He also seems to think that Turkey can engage in negotiations from a position of strength since the Turks have skin in the game and have already debunked the myth that the People's Protection Units (YPG), the PKK's Syrian franchise, was the only effective force against Daesh terrorists.

At the same time, the plan to set up a 5,000-square-kilometer safe zone in northern Syria could have tremendous benefits including defeating Daesh, securing a seat for the FSA in Astana and Geneva, containing and possibly neutralizing the YPG threat, partially resolving the refugee crisis and preventing the Assad regime from derailing political transition talks with the moderate opposition.

Turkey's commitment to removing terrorists from Raqqa and Manbij indicates that the Turks are committed to their existing Syria policy. Moving forward, it will be difficult for Ankara to reach an agreement and coordinate their actions with Moscow and Washington. That the Russian military accidentally targeted Turkish troops in al-Bab last week attests to this fact. Again, the Assad regime could seek closer cooperation with the YPG over concerns about the advances of the Turkish-backed Free Syrian Army. Notwithstanding the situation on the ground, the Trump administration's new Syria plan could cause drastic change across the Middle East.

Having identified the fight against Daesh and the containment of Iran as its regional priorities, the Trump White House has not been able to formulate a coherent position until now. Judging by media reports about Trump's phone calls with Gulf nations, it would appear that the mission to contain Tehran will kick off from Yemen – where the U.S. wants to write a success story and show the Gulf that it means business.

Syria and Iran, however, will continue to play a key role in regional politics. In Syria, the U.S. needs to negotiate with the Russians. Meanwhile, there are serious challenges in Iraq that have been misguidedly dismissed by policy makers. Specifically, it remains unclear how Washington can push Baghdad away from Iran. One way or another, the Trump administration's Middle East policy is likely to send geopolitical shockwaves throughout the region.

For the time being, the only reasonable prediction is that strong states will be able to use the next wave to their advantage – or at least survive it with minimal damage. My sense is that Erdoğan's statements about Raqqa and Manbij, along with his trips to Bahrain, Qatar and Saudi Arabia, are part of an effort to prepare for what's to come.

As a matter of fact, the Turkish leader on Monday delivered a speech at the International Peace Institute in Bahrain and urged the Gulf Cooperation Council to assume a more active role in regional issues including Syria and Iraq. As such, Turkey's proposal is for regional powers to work together to address their own problems.

At a time when there are rumors about Trump seeking to unite the Gulf against Iran, Erdoğan's remarks suggest that the Turks are prepared to take initiative. To be clear, his call on regional powers to take charge of their own future was a historic message. After all, letting the U.S. take care of everything will not solve all of the Gulf's problems. In order to survive the regional chaos that the Trump administration will unleash, strong leadership and close cooperation are indispensable.