Which campaign rhetoric is most effective? 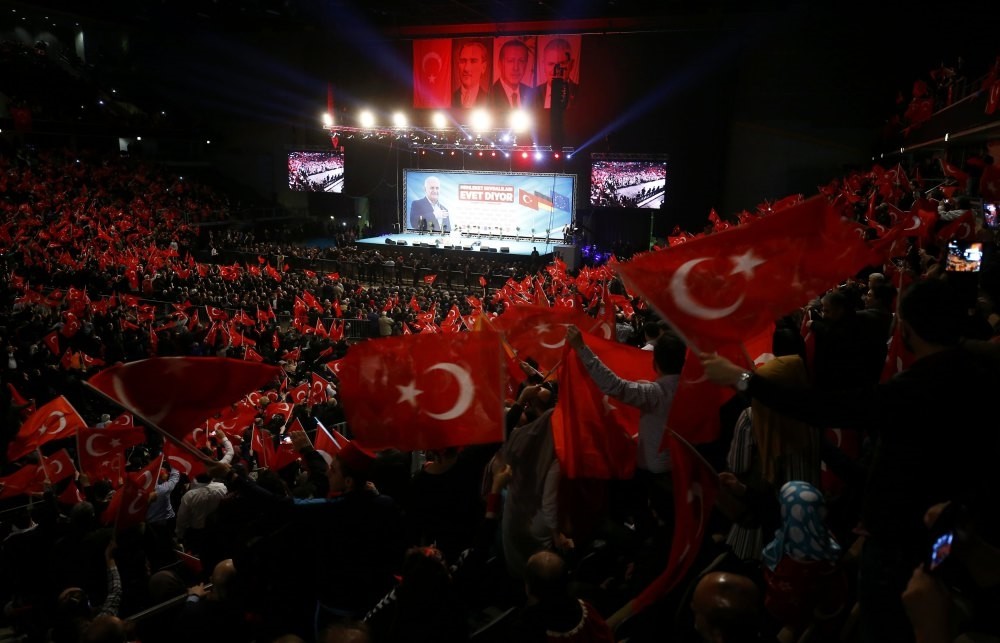 In a nutshell, the opposition's campaign rhetoric for the April referendum is a repetition of its obsessive anti-Erdoğan rhetoric, while those in favor of switching to the presidential system are able to clarify what the change will bring to Turkey

Ahead of the April 16 constitutional referendum in Turkey, the "yes" and "no" campaigns seek to win over undecided voters. Although the country's leading pollsters predict that the proposed changes will be adopted, the next eight weeks will be dominated by intense campaigning.

The historic campaign has thus far focused on change in general rather than specific amendments related to the presidential system and other technical details. One way or another, politicians want to provide their reading of the Republic's entire history through the lens of the upcoming vote. As such, there are plenty of big words going around – including "the end of the regime," "the survival of the Republic," "one-man rule" and "the nation's resurrection." With the referendum fast-approaching, voters will make up their minds about what they like or dislike about the proposed system of government and make their mark on the nation's political history by speaking their minds.

The million-dollar question is which campaign will be able to win over the undecideds. This is the only question that matters. Personally, I believe that each campaign's ability to blend positive and negative messages will determine the winner.

At this point, the "yes" campaign criticizes the parliamentary system for empowering the guardianship regime, fueling political crisis, placing the nation's future at risk and causing confusion over jurisdiction. At the same time, they make the case that the presidential system will help Turkey address pressing issues such as terrorism more effectively while promoting stability, economic development, efficient government and improving the country's international standing. This message is packaged as an attempt to "reach the 2023 goals" and revive the country – phrases President Recep Tayyip Erdoğan himself used at campaign stops across the Anatolian heartland. In other words, the proponents of constitutional reform have been telling voters about the problems that they would like to address and giving them hope at the same time – which is backed by the Justice and Development Party's (AK Party) strong track record since 2002.

The "no" campaign, in turn, has been relying heavily on fear and pessimism to allege that the presidential system will lead to a "one-man rule" and the "institutionalization of the state of emergency to end democracy." Needless to say, this message is an extension of the charge of authoritarianism, which had directed at the AK Party government for some time. It would appear that the Western media adopted a similar position ahead of the constitutional referendum. Although the "one-man rule" argument in the sense of forming a dictatorship has been overused in Turkey, it is important to take the technical criticism that not all executive authority must rest with a single individual seriously. In response to this claim, it is important for the pro-change camp to recall that the president will not rule the country as an individual but through public institutions. The electorate, furthermore, must be informed about the costs of duality within the executive branch – something that the Turkish people largely forgot due to Erdoğan's strong leadership.

Again, the "yes" campaign has the ability to address the criticism that the state of emergency will be institutionalized by making the case that the chronic crises caused by the existing system will irreversibly disappear under the proposed system of government. In other words, they need to turn the opposition's critique into a source of hope. The presidential system brings together stability and reform and makes it possible for the country to address pressing problems – which renders extraordinary measures, such as military coups and memorandums, obsolete.

The "no" campaign, furthermore, suffers from a severe disadvantage: They are communicating zero positive messages. Although they urge the Turkish people to vote against the proposed changes, it remains unclear how rejecting the plan will help to solve the country's problems. Opposing the bill, moreover, will not make the AK Party go away. As such, perhaps the only positive message they could reasonably communicate is that President Erdoğan and the AK Party will still be in charge if the people vote against constitutional reform. After all, asking the ruling party what they could not do under the current system is bound to be overshadowed by the incumbents' case for change.

Burhanettin Duran is General Coordinator of SETA Foundation and a professor at Social Sciences University of Ankara. He is also a member of Turkish Presidency Security and Foreign Policies Council.
Last Update: Feb 23, 2017 1:35 am
RELATED TOPICS