Who should Trump pay attention to in Syria? 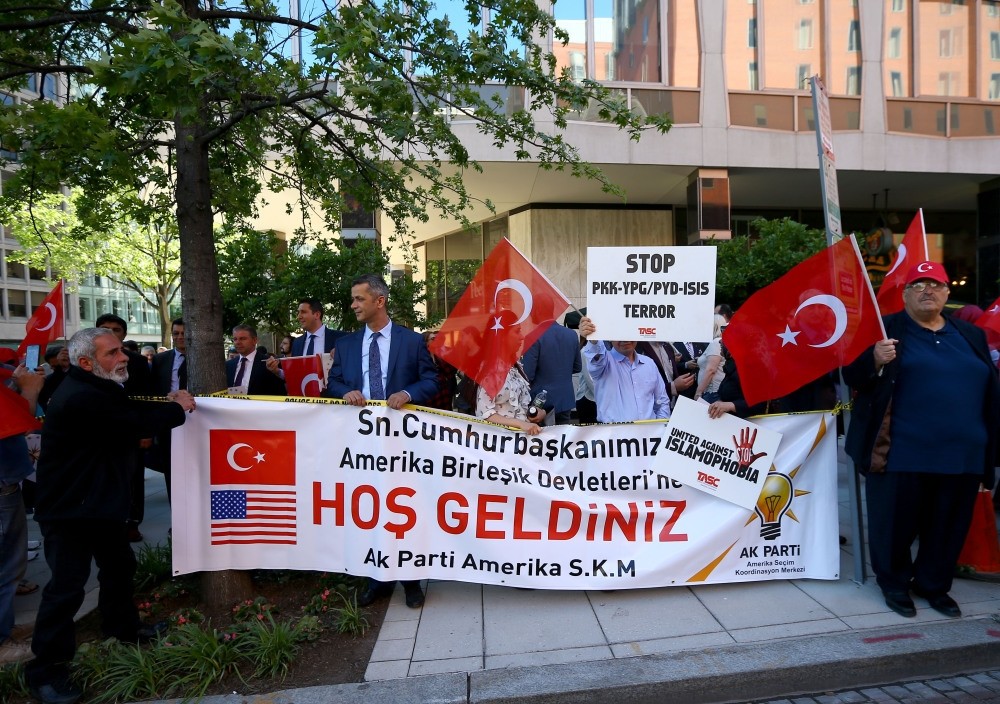 Turkish people holding banners to welcome President Erdou011fan and the Turkish delegation, who arrived in Washington to meet with the Trump administration to discuss the damaged Turkish-U.S. relations.
by Burhanettin Duran May 17, 2017 12:00 am

If Trump continues to be manipulated by Obama's advisers to determine his Syria policy, he'll be remembered as a failed U.S. president in the future just like Obama

We have arrived in Washington on the last day of President Recep Tayyip Erdoğan's China-U.S. visit beginning on Friday. Although the One Belt, One Road initiative in Beijing presented a great potential of trade cooperation, we were all focused on the Erdoğan-Trump meeting. Under the shadow of U.S. President Donald Trump's order to arm the Syrian terrorist group of the People's Protection Units (YPG), was it possible for the bilateral meeting to result in a reconciliation? Mr. Erdoğan was as optimistic as he was ready for surprises.

In an interview, Mr. Erdoğan noted that he did not regard Trump's most recent decision as the "final decision," saying, "Now, we will conduct the final meeting. Then, we will make our final decision. If we are strategic allies, we have to make decisions as an alliance. If the alliance is overshadowed, we must be on our own."

The expression of "being on our own" points to the extent of the existential PKK/YPG threat that Turkey is feeling. It also implies that this threat cannot be compared to any relations with allies.

Before the Erdoğan-Trump summit, which is expected to be a "milestone" in bilateral relations between Turkey and the U.S., some incompatible advice on the U.S.'s Syria policy came from two prominent figures.

The first is Colin H. Kahl, a senior adviser on foreign policy and security issues to the former President Barack Obama and Vice President Joe Biden between 2014 and 2017, and the other is Robert Ford, the former U.S. ambassador to Damascus.

According to Kahl, who supports the Obama administration's Syria and YPG policies, the U.S.-YPG rapprochement is the result of Turkey's own decisions. In other words, the YPG came to the forefront due to Mr. Erdoğan's unwillingness to fight Daesh since September 2014. Also, the Allen-McGurk plan created after Daesh's attack on Kobani came to nothing after Mr. Erdoğan wanted a no-fly zone in northern Syria including Damascus and Idlib. Kahl also claimed that Mr. Erdoğan was focused on not fighting Daesh and other extremist groups, but rather toppling Assad. Of course, Kahl did not talk long about the Obama administration's efforts to avoid carrying out the train-and-equip program for the moderate opposition. Furthermore, he tried to rationalize Obama's decision to not use U.S. troops for the no-fly zone while criticizing Mr. Erdoğan for not mobilizing his "strong army" against Daesh. Just like President Obama did.

He also failed to mention the U.S.'s unfulfilled promises to Turkey, and the military support (including air bombs, heavy weapons, et cetera) provided to the YPG terrorist group instead of the Syrian moderate opposition.

What Kahl advises Mr. Trump to do is to convince Mr. Erdoğan on returning to the reconciliation process through telling him that U.S.-YPG relations are to "the benefit of" Turkey and in return, to promise that a "Kurdish state" in northern Syria will not be established through facilitating the YPG withdrawal to the east of Euphrates (including Manbij). At the same time, according to Kahl's advice, Ankara has to agree on granting local autonomy to the Syrian Democratic Forces (SDF), which is included with pro-Turkey groups.

Meanwhile, Robert Ford regards the Trump administration's cooperation with the PKK/YPG as a "fatal flaw." Indeed, he is repeating a fact, which all U.S. officials know and some acknowledge: The Democratic Union Party (PYD) and the YPG are members of the Kurdish Communities Union (KCK), which is on the U.S.'s list of terrorist organizations. And the YPG's ideological imposition on the Arab-Sunni communities might bear results that could strengthen the leaders of al-Qaida and Daesh terrorist groups.

Additionally, the YPG cantons constitute a "strategic deepness" in the PKK's attacks on Turkey. Foreseeing how difficult the post-Daesh period will be for the U.S., Ford is thinking that Turkey's promoting anti-YPG discourses in a predominantly Arabic region will make things difficult for Washington. That's why he advises Mr. Trump to reach a mutual agreement with Mr. Erdoğan.

Both Kahl and Ford are aware of the fact that stability in northern Syria cannot be achieved without Turkey, because the main aim is to establish a post-Daesh order in Syria and the withdrawal of the U.S.'s troops. Thanks to its experiences in Iraq and Afghanistan, Washington knows well how hard it is.

President Trump should pay attention not to Obama's bureaucrats, who produce arguments in an effort to whitewash their term, but the predictions by those who know the region well.