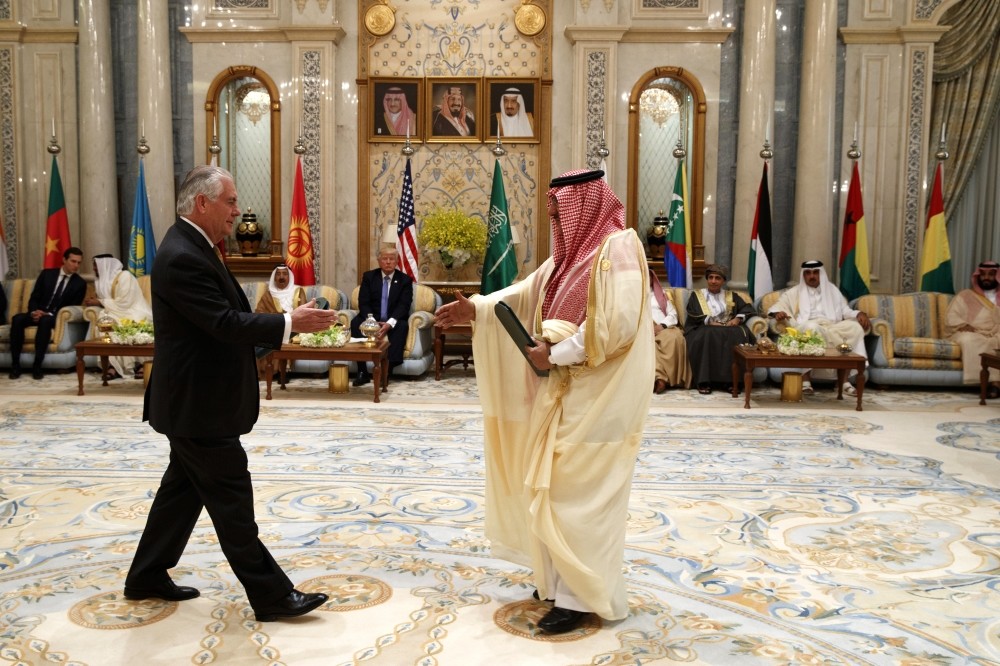 President Trump (C, rear) looks on as U.S. Secretary of State Tillerson (L) and then Saudi Crown Prince Muhammad bin Nayef (R) exchange a handshake during a meeting of the GCC in Riyadh, Saudi Arabia, May 21.
by Burhanettin Duran
Jun 24, 2017 12:00 am

The Saudi royal family has a new future king. Having been endorsed by 31 out of the 34 members of the Allegiance Council, a royal decree made Muhammed bin Salman crown prince. King Salman, who was crowned in 2015 after his brother Abdullah's death, had designated Muhammed bin Nayef as crown prince and his son, Muhammed bin Salman, as second-in-line. Since then, a power struggle has taken place in Riyadh between the two men – a battle that helped Muhammed bin Salman become increasingly influential. The fact that King Salman had been signing off on his son's plans to boost his power, too, was a sign that change was on the way.

Muhammed bin Salman, who is considered the mastermind behind Riyadh's intervention in Yemen, the 2030 vision, the transfer of two Red Sea islands from Egypt and Saudi Arabia's friendly relations with U.S. President Donald Trump, finally secured his succession to the throne. In addition to his father's assistance, Muhammed bin Salman's rise was propelled by the strategic support he received from Mohammed bin Zayed, the crown prince of Abu Dhabi, in the Middle East and the United States.

The appointment of Muhammed bin Salman as crown prince hardly surprised anyone in world capitals, including Washington and Ankara. Quite the contrary, many policymakers seem to believe that with Riyadh's main foreign policy man becoming more powerful, the decision-making process in Saudi Arabia will become more effective. Some observers maintain that Muhammed bin Salman's rise to the top was propelled by his close relationship with Trump and argue that the new balance of power inside the Saudi royal family was the product of the Trump effect. At the same time, it is possible to see Muhammed bin Salman's new position and the appointment of young princes to key government offices signals the rise of a new generation in Riyadh. Likewise, the fact that the line of succession has become clearer could serve as a source of stability.

However, the fact that Muhammed bin Salman is a young, ambitious and adventurous figure raises questions about Riyadh's future policies in the region. His personal relationship with Mohammed bin Zayed already resulted in a campaign to eliminate democratic Islamist movements like the Muslim Brotherhood, an unsuccessful military campaign in Yemen and the blockade of Qatar leaves regional players concerned.

To be clear, the two crown princes, heartened by Trump's encouragement to Arab leaders at the Riyadh summit, could step up their efforts to assume regional leadership. Keeping in mind that Washington's Middle East policy focuses on the containment and isolation of Iran, Saudi Arabia could assume a stronger stance in foreign policy.

However, the fact that the Houthis continue to control Sanaa despite heavy Saudi bombing campaigns raises questions about Riyadh's ability to deal with Tehran's proxies in the region. Nor is it clear that Saudi Arabia can actually pay for the weapons they ordered from the United States provided that the Saudi economy has been crippled by the decline in oil revenues. As such, it is important for the Saudi royal family to be realistic about their political, military and economic capabilities when making power projections. Adventurous foreign policy initiatives encouraged by the UAE and Trump's ambiguous words could indeed diminish Saudi Arabia's regional power and raise concerns about the country's survival.

It takes a lot of effort to reconcile Washington's priorities with the Gulf's chaotic state of affairs and the U.S. State Department's most recent statements about Qatar is a case in point. Earlier this week, State Department Spokesperson Heather Nauert questioned the motives of Saudi Arabia and the UAE for their boycott of Doha by asking whether "the actions [were] really about their concerns regarding Qatar's alleged support for terrorism or … the long-simmering grievances between and among the [Gulf Cooperation Council] countries."

The Trump administration's effects on the Middle East, where it is not expected to deploy more U.S. troops, could have serious consequences on the ground. Under the circumstances, it is essential that Gulf countries run a reality check on their ambitions and capabilities.