Israel's ambitions and the brewing fight in the Middle East 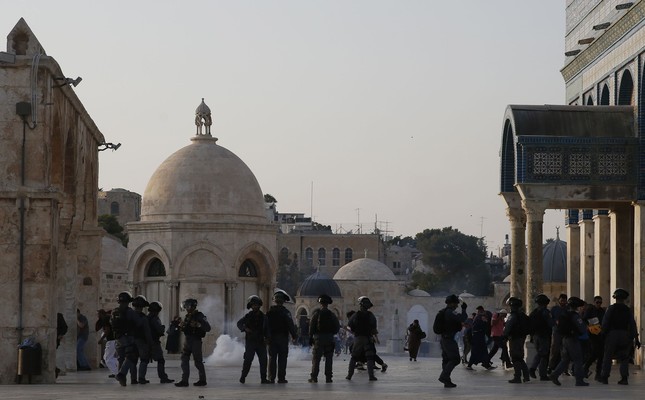 Israeli forces fire tear-gas to disperse Palestinians after clashes broke out inside the Al-Aqsa Mosque compound in Jerusalem, July 27.

Even if the ongoing row around Al-Aqsa Mosque ends peacefully, new tensions fueled by Israel for its interests will continue appearing

In the face of mounting criticism, Israel decided to remove from the area security installations, which had been placed outside Al-Aqsa Mosque on July 14. The possibility of Palestinian resistance against the installations fueling tensions in Jordan, a close ally of Tel Aviv, played an important role in that decision. Noting that Israel's move was "a correct yet inadequate step," President Recep Tayyip Erdoğan criticized Tel Aviv for "attempting to disrupt Jerusalem's Islamic character by implementing new measures every day." Erdoğan's criticism points to the heart of the current Al -Aqsa crisis and future problems in the area.

Simply put, the problem is that Israel just took its ambition to "jewdify" Jerusalem and Masjid Al-Aqsa to a whole new level. Under the influence of extremist groups like the Temple Mount Movement, Israeli politicians desperately want to realize the dream of laying claim to the hill over which Al-Aqsa stands. The first sign was Tel Aviv's strong reaction to an October 2016 resolution by UNESCO that condemned Israel's policies around the Al-Aqsa compound. On July 14, the Israelis backed their strongly-worded statements with concrete action. Provided that Muslim leaders, with the notable exception of Erdoğan, turned a blind eye to this transgression, Israel has reason to believe that conditions are ripe for new measures. It is therefore that Tel Aviv won't give up on its dream of "jewdifying" Masjid Al-Aqsa. At the same time, Israelis will be looking out for an opportunity to remove Hamas from Gaza – which was the driving force behind the Qatar crisis.

When the Al-Aqsa crisis broke out, many people asked the same simple questions: Why would Israel take a series of steps that risked mobilizing the Islamic world against Tel Aviv at a time when the situation in the Middle East was more favorable to Israelis than ever before? Why did Tel Aviv implement measures that could put Arab leaders – with whom Israel has an opportunity to cooperate – in a difficult position at home? And why would Israel provide Iran with rhetorical ammunition just as the international community talks about plans to isolate and contain Tehran? The answer, too, is quite simple: Israel wanted to cash in on the geopolitical advantages it was able to gain since the Arab revolts.

Popularly elected governments ruling Middle Eastern countries have always been Tel Aviv's worst nightmare. In 2006, Israel had imposed an embargo over its dissatisfaction with Hamas's victory in the Gaza elections. Three years later, Tel Aviv's relations with Turkey took a serious hit at the World Economic Forum in Davos, Switzerland. As the Arab Spring soured into the Arab Winter, the Israelis – who suffered from a "democracy scare" – were quite pleased with the outcome. Meanwhile, the Syrian civil war knocked out another enemy of Tel Aviv. In 2013, the Gulf monarchies led by the United Arab Emirates presented a huge gift to Israel by removing Egypt's democratically-elected president from power. Again, the growing polarization between Saudi Arabia and Iran led to a geopolitical chaos that ultimately serves Israel's interests. Weakened or torn into pieces, Sunni countries were forced to cooperate with Tel Aviv.

The Trump administration's efforts to isolate Iran, in turn, once again fueled Tel Aviv's ambitions. Meanwhile, the Qatar crisis served Israel's interests by targeting Hamas and weakening the Gulf Cooperation Council. To be clear, the possibility of no single anti-Iran bloc emerging in the Gulf does not worry the Israelis as much as some observers would like to believe. After all, Iran's "resistance" has been targeting the Sunni world rather than Tel Aviv. Today, Tehran's infamous Quds Force only seems to be good for fueling sectarian tensions. And for Israel, Hezbollah remains a manageable threat.

To cut a long story short, it is safe to assume that the status of Masjid Al-Aqsa will remain at the heart of tensions in the region. The current situation favors Israel's ambitions and Tel Aviv will not stop trying to turn its geopolitical advantages into concrete benefits by fueling limited tensions. Focusing on sectarian and short-term interests, Arab leaders will not be able to curb Israel's ambitions. And the deep-running anger of people across the Middle East is the perfect storm in the making.