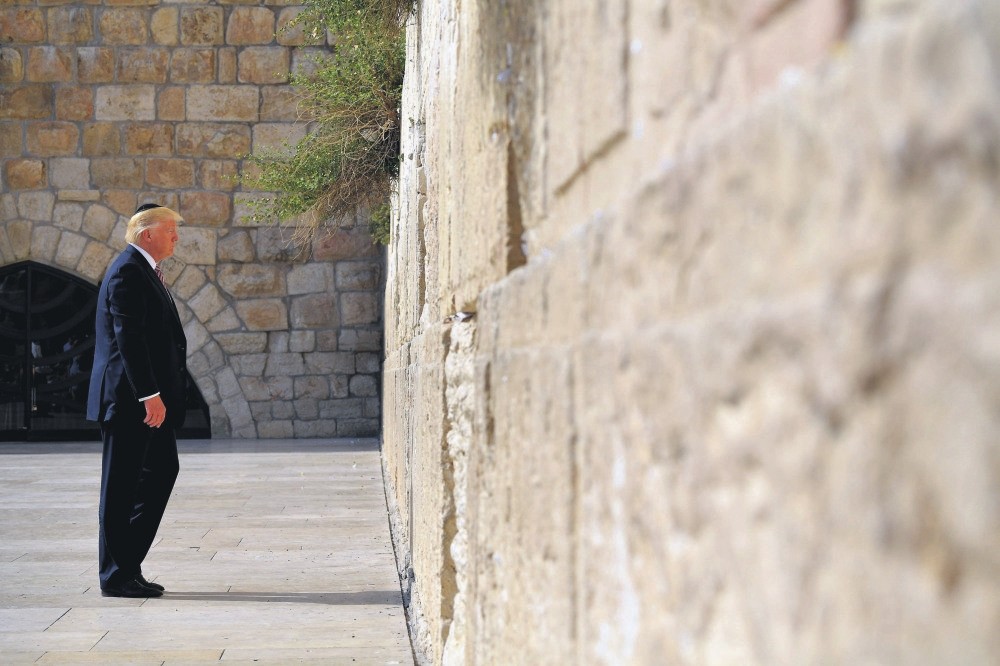 President Trump visits the Western Wall, the holiest site in Judaism, Jerusalem's Old City, May 22.
by Burhanettin Duran Dec 07, 2017 12:00 am

At the end of the day, the Jerusalem conflict that started being debated after Trump's decision, is likely to damage the U.S.'s position in the region

According to media reports, U.S. President Donald Trump intends to move the U.S. Embassy in Israel from Tel Aviv to Jerusalem. Meanwhile, a special counsel investigation into Russian meddling in the 2016 U.S. presidential elections could focus on the Trump's son-in-law Jared Kushner, along with his son Donald Trump Jr., following a guilty plea from former national security adviser Michael Flynn. To make matters worse, President Trump himself could potentially end up in trouble due to his May 2017 decision to dismiss former FBI Director James Comey.

At the same time, experts warn that the United States is "very close" to going to war with North Korea. And the debate on the legal status of Jerusalem, an ancient problem in the Middle East, is being revived yet again. Perhaps President Trump assumes that delivering a campaign promise could win over the Israel lobby and make things easier for him in Congress. However, this controversial decision will actually place U.S. and Israeli interests at risk.

Israel has benefited more than any other country from the chaos that spread across the Middle East since the Arab Spring. Civil wars in Syria and Iraq, coupled with a military coup in Egypt and attacks against Turkey, have made things easier for Tel Aviv in recent years: The two-state solution has been shelved and the Arab-Israeli conflict has been forgotten, as all eyes were turned to problems among Arabs and Iran's Shiite expansionism. At this point, Tel Aviv faces zero pressure from the international community about Palestine. Meanwhile, Donald Trump's election victory and Israel's relationship with Jared Kushner created an environment in Washington, in which Tel Aviv could maximize its interests.

At the same time, the Israelis have been able to cooperate with Moscow in certain areas, which made it possible for them to strike Hezbollah or Iranian positions in Syria.In recent months, the country was able to add Saudi Arabia to the list of its allies in the Gulf, which included, among others, the United Arab Emirates. Nowadays, Israel is trying to make its cooperation with Riyadh and others official and uses the threat of "Iranian expansionism" to safeguard its security interests as well as to work more closely with Gulf countries. Under the circumstances, it seems unlikely that new steps will be taken to resolve the Palestinian question or that Tel Aviv will be stopped from building new settlements in eastern Jerusalem.

The Trump administration's decision to move the U.S. Embassy in Israel from Tel Aviv to Jerusalem seems to serve Israeli interests. Since President Trump has been unable to establish himself in the White House, Israel's lobbyists on Capitol Hill could be thinking that it's high time for them to push for a historic step. In doing so, they could be hoping that Eastern Jerusalem will be part of the united capital of Israel, which would be a huge symbolic win for the Zionists. However, it is important to note that taking such a step right now would reveal two of Israel's vulnerabilities: First, it would make Israel more visible in the region and suggest that the country has been taking advantage of regional chaos to pursue an aggressive agenda.

At the same time, Israel's cooperation with certain Gulf countries will presumably alienate Arabs across the Middle East. Although the Grand Mufti of Saudi Arabia recently issued a fatwa to sanction Riyadh's cooperation with Israel against Iran and Hezbollah, that step won't be enough to legitimize such acts in the eyes of the people. Let us recall that the Organization of Islamic Cooperation (OIC) was established in response to the question of Jerusalem's status. And the ancient city isn't just the capital of the Palestinian state, but it is also the single most important symbol for the Muslim world.

In the past, I had made the case that Donald Trump's rise to power would fuel Israel's greed. Having encouraged Saudi Arabia's ambitions by attending the Riyadh summit last spring, Mr. Trump will have taken yet another step towards weakening the Gulf if he indeed moves the U.S. Embassy to Jerusalem. In the end, he will have doomed his own strategy, which aims to persuade Israel and the Gulf to join forces to contain Iran, to failure. In addition to pushing Hamas towards Iran, such a move would give the Iranians total control over all Islamist groups in the Middle East – Sunnis and Shiites alike.

At the same time, the U.S. will give new momentum to Tehran's ideological claims, which have been worn down by the Syrian civil war, as the charge of "sectarian expansionism" will become less significant. After all, the Trump administration has been unable to make any progress regarding the Israeli-Palestinian peace, which has been managed by Jared Kushner with the support of Egypt and the UAE. Needless to say, a number of U.S. presidents have tried (and failed) to bring peace to the region.

Either way, the crisis surrounding Jerusalem won't serve U.S. interests. Instead, the White House will breathe new life into Iran and force the Gulf to swallow a very bitter pill. No wonder that the Arab League will hold an emergency meeting about the most recent developments!