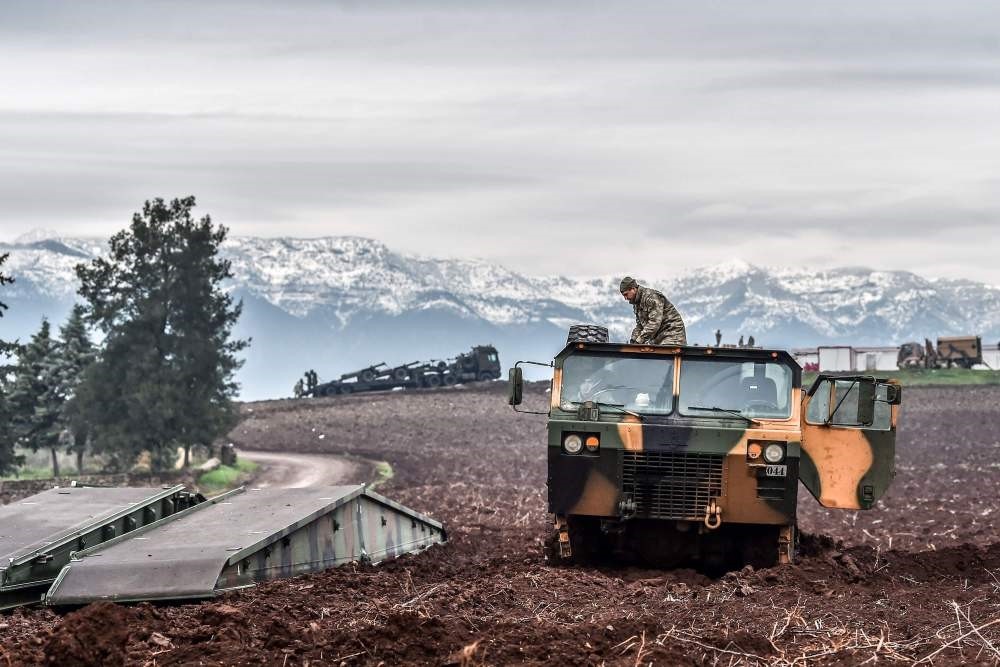 Turkish troops wait near the Syrian border at Hassa, Hatay, as part of Operation Olive Branch against YPG terrorists in northern Syria, Jan. 24.
by Burhanettin Duran
Jan 27, 2018 12:00 am

If Washington reconsiders its YPG policy, it will understand its irrational expectations of Ankara

Operation Olive Branch apparently disturbed the United States – only second to the People's Protection Units (YPG). It was telling that U.S. President Donald Trump followed up on contradictory statements from U.S. officials at various levels by calling President Recep Tayyip Erdoğan and asking him to limit Turkey's military involvement and not risk confrontation with U.S. forces on the ground.The previous day, Foreign Minister Mevlüt Çavuşoğlu had been approached by U.S. Secretary of State Rex Tillerson with a proposed buffer zone along the border. However, Washington's failure to keep its promises to Turkey in Syria resulted in deep distrust in Ankara. For Turkish officials, statements mean absolutely nothing. All they care about is action.

For example, Erdoğan recently said that former President Barack Obama's administration had failed to keep its promises about Manbij. And Trump has continued to deliver his promise that Washington would stop arming the YPG.

At a time when the U.S. made clear that it would stay in Syria and identified Iran as its primary target in the Middle East, Ankara placed future U.S. operations through its YPG proxy at risk. Turkey effectively rejected plans to include the group in the Geneva peace talks and its gradual transformation into a prominent player on the ground.

By launching a military operation into northern Syria, Turkey made clear that it did not recognize the stability that Washington aimed to promote in the country by transforming the PKK's Syrian affiliate YPG into a regular army.

In recent days, spokespeople for the U.S. government have made several arguments to limit and, if possible, reverse Operation Olive Branch such as its destabilization, potential damage to the fight against Daesh, civilian casualties, Russia's supposed efforts to drive a wedge between two NATO allies and the danger of confrontation with U.S. forces on the ground.

Needless to say, they will come up with new arguments going forward. Washington might argue that the Turkish-backed Free Syrian Army is linked to Daesh or al-Qaida. They could raise questions about the moderate opposition's support in the operation. But the Turkish public, which is committed to the fight against Daesh, al-Qaida, the PKK and YPG alike, are resilient to such smear campaigns.

To be clear, the buffer zone plan, which Turkey pitched to the Obama and Trump administrations, is unlikely to come to fruition. It would be irrational for Turkey, which launched the Afrin operation as a result of ongoing cooperation with Moscow, to let Washington back into the area by enforcing a buffer zone. Offering the U.S. some room in the area, which was facilitated by Russia, would be a serious problem. The U.S. could possibly drive a wedge between Turkey and Russia. And, to be clear, the buffer zone must be considered across the entirety of the Turkish-Syrian border. Still, it is impossible for the U.S. to sell the YPG militants in a buffer zone that would be so close to the Kobani and Jazeera cantons. And a buffer zone limited to Afrin would be unacceptable for Ankara. As such, the buffer zone debate serves no purpose but to weaken the Turkish public's support for the operation and mounting pressure on Turkey in the international arena.

Washington needs to overhaul its YPG policy if it wants to actively cooperate with Turkey. The U.S. cannot convince Ankara by saying that YPG militants east of the Euphrates would not target Turkey. Moreover, it goes without saying that the YPG cannot bring stability to northern Syria.

After all, the so-called stability associated with the group rests on the severe repression of Arabs and changing demographics.

Today, more than 350,000 Syrian Kurds remain in Turkey as refugees because they are unable to return to YPG-controlled parts of the country.Genuine stability can only be brought to the area by the peace and reconstruction process facilitated by Euphrates Shield.

Even if the U.S. were to deploy a large number of troops to the Democratic Union Party- (PYD) controlled cantons, the YPG cannot ensure stability in the long run.

Unable to offer Turkey a safe zone east of the Euphrates, Washington cannot reasonably expect Ankara to outsource Turkey's border security to U.S. Central Command (CENTCOM), which is trying to transform the YPG into a regular army.

In my opinion, U.S. officials are not really worried that their troops in Manbij will be in harm's way. As the Turkish-backed Free Syrian Army gains control over Afrin, the U.S. fears it will be unable to keep YPG militants in other cantons under control. Once out of control, U.S.-trained YPG militants could stop pretending that they are not actually PKK terrorists.