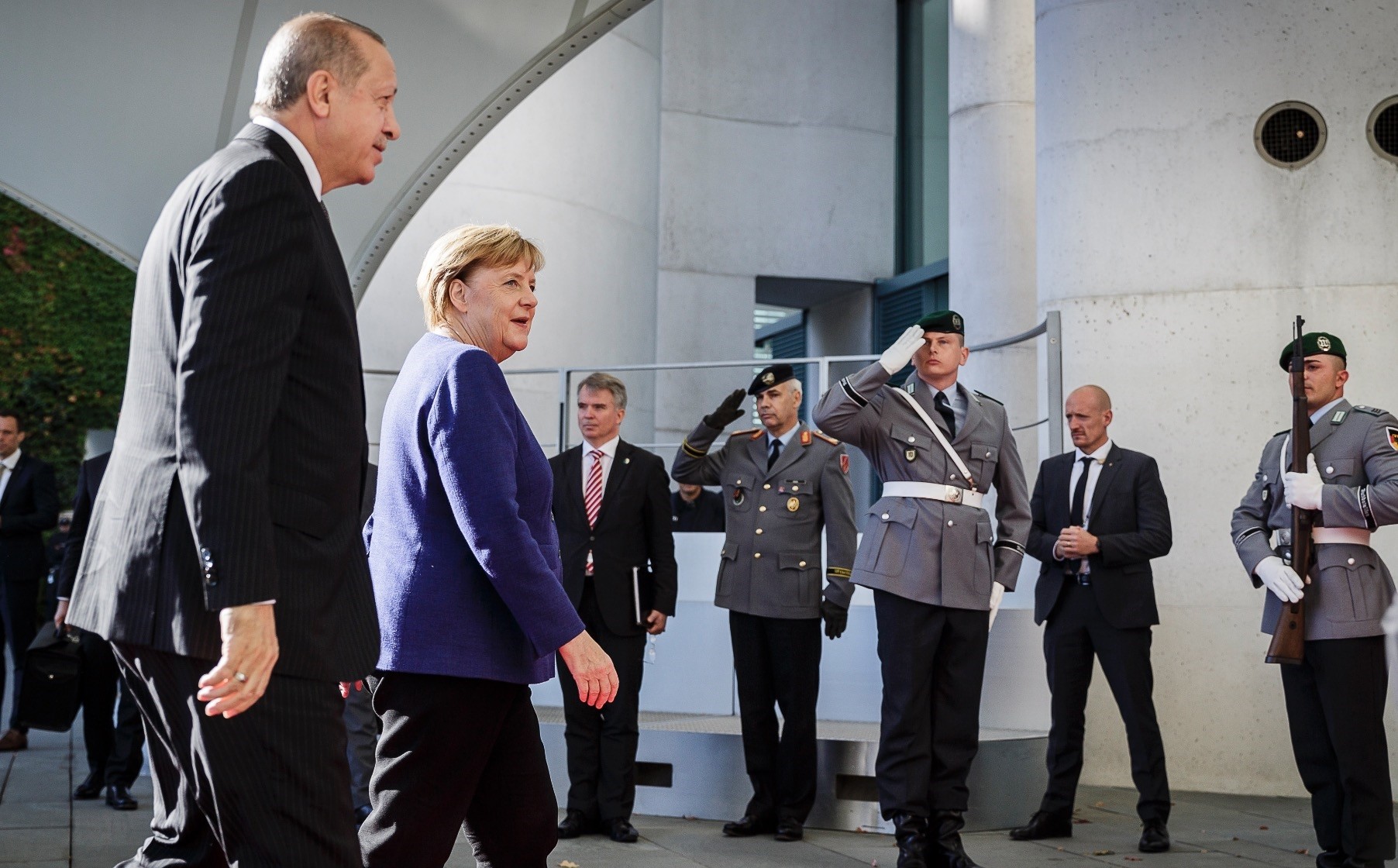 President Erdou011fan (L) and German Chancellor Angela Merkel (2-L) walk to a meeting on the future of bilateral ties at the Chancellery, Berlin, Sept. 29.
by Burhanettin Duran
Oct 01, 2018 12:00 am

Turkey and Germany need each other more than ever to address and manage common threats such as trade wars, migration issues and security strategies, to name but a few pressing issues

President Recep Tayyip Erdoğan's three-day state visit to Germany was the first and most crucial step in efforts to normalize bilateral relations. This is the very beginning of a comprehensive normalization process. It will take time for Turkey and Germany to overcome the tensions of the past two years and to identify their shared interests. Yet the symbolic and strategic aspects of last week's high-level visit suggest that the two countries made a strong start. How Erdoğan and German Chancellor Angela Merkel handled a press conference on Friday established that they were walking down a cautious and careful path.

First and foremost, last week's visit addressed an anomaly in Turkish-German relations. Facing mutual threats, the lack of communication between the two governments was a serious problem. Frustrated with the charge of "Nazi-like practices," the German side blocked meaningful talks citing the arrest of German citizens in Turkey. Meanwhile, the Turks were unhappy with the ability of terrorist groups, including the PKK and Gülenist Terror Group (FETÖ), to operate in Germany – not to mention heartbroken due to the weakness of Berlin's response to the July 15 coup attempt.

Ahead of Erdoğan's visit, German media outlets, especially Die Welt and Bild, urged Merkel's government to mount pressure on Turkey, which faced economic challenges. A rational stateswoman, the German chancellor opted for normalization without losing sight of her country's national interest. The joint press conference made it possible for the two sides to have a reasonable conversation on critical issues in the presence of the press corps. Both sides talked about the positive developments in their respective areas of interest and provided a list of demands from their counterpart. Turkish and German officials discussed their problems and shared their concerns.

Meeting for a working breakfast on Saturday, Erdoğan and Merkel were expected to concentrate on areas of strategic cooperation. After all, both countries need the other to address a range of problems that no other country could solve: Energy, security, refugees, diaspora communities, U.S. sanctions and the rise of protectionism. In the face of U.S. President Donald Trump's chaos-inciting policies, both countries want a world order based on norms.

The situation in Idlib, the reconstruction of safe zones and political transition were some of the items of the leaders' agenda related to the Syrian civil war. In October, the leaders of relevant countries will gather in Istanbul at the request of Erdoğan and Merkel. Turkey, Germany, France and Russia will hold talks on the Syrian crisis and the developments in Idlib and beyond. At last, Europe seems to show some level of interest in taking effective steps regarding Syria. Needless to say, this meeting will probably frustrate the United States, which is why the French participation is all the more significant. It is possible that Merkel talked French President Emmanuel Macron into joining the talks.

After all, Syria is a testing ground for much bigger problems. The Trump administration's trade wars were a prelude to fierce competition over energy resources, the chaos incited by economic sanctions and the weakening of international organizations. The Eastern Mediterranean is heating up and the United States will impose additional sanctions on Iran in November. Then Trump will focus on the Palestinian question in the name of "peace." To address the coming challenges, the two major European powers must take the initiative. They must work with Turkey and Russia to secure the European Union's future.

To be clear, Merkel faces an uphill battle in her efforts to normalize Turkish-German relations. She already knows how much her country and the rest of Europe need Turkey. Yet Merkel's government must find a way to reverse the trend of anti-Erdoğanism and anti-Turkey sentiments in Germany. Those steps will no doubt have an impact on the rest of Europe. After all, hostility toward the Turkish president fuels racism, xenophobia, the rise of far-right movements and Islamophobia. Anti-Erdoğanism hurts European democracies no less than the refugee crisis. Again, Berlin's commitment to economic cooperation will play a key role for Turkey, which is under financial attack. Finally, Merkel will have to ease pressures on the Turkish presence in Germany.