Who was behind the Manbij attack? 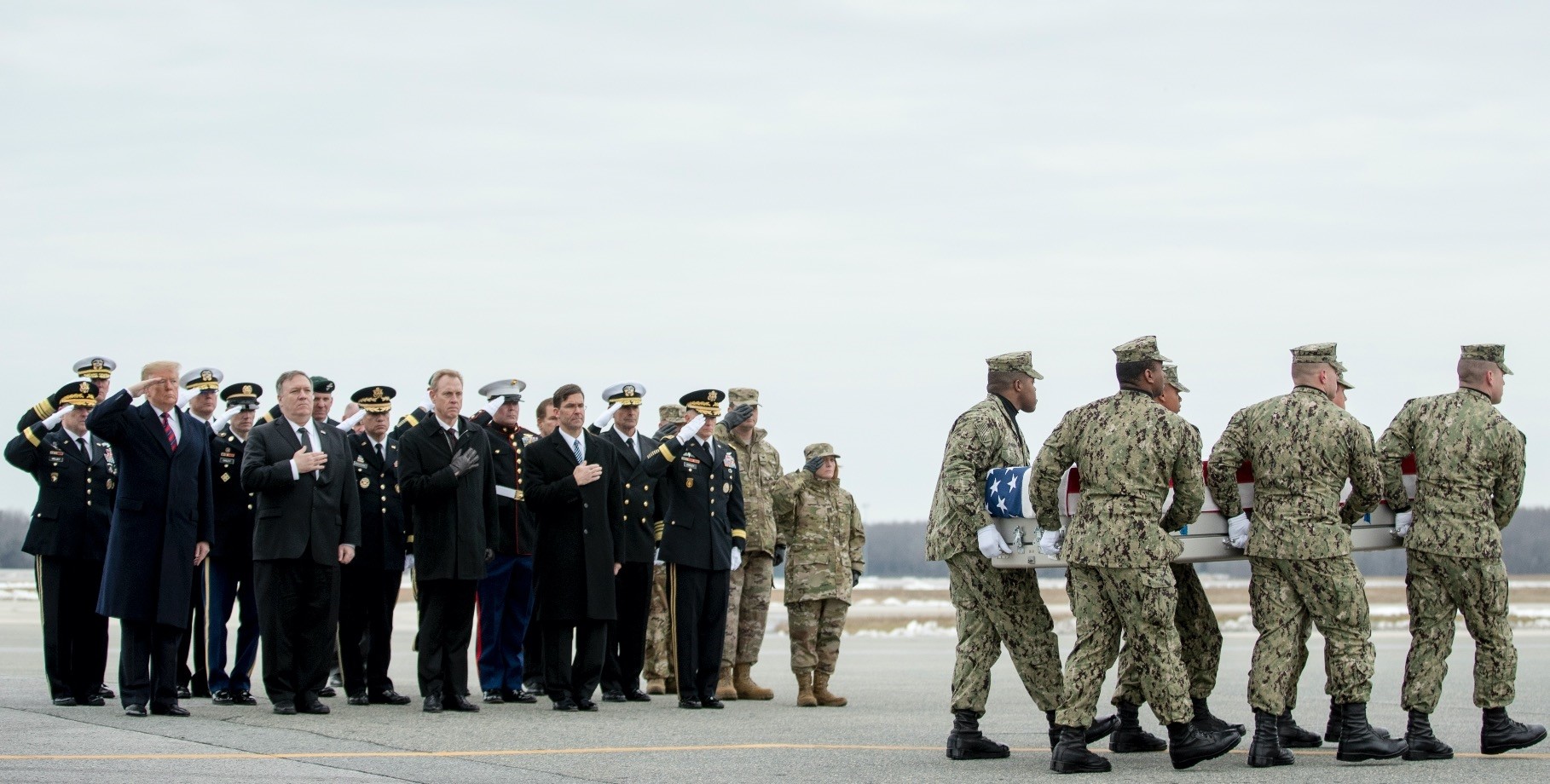 The U.S. president and high-level officials salute as a U.S. Navy team transfers the body of Scott A. Wirtz, who was killed in a suicide attack claimed by Daesh in Manbij, Syria on Jan. 16.
by Burhanettin Duran Jan 21, 2019 12:07 am

The best option for Washington is to work with Ankara in the withdrawal process, as terrorist groups are fanning the flames in Syria, just as they did in the bloody Manbij suicide attack

The Daesh terrorists are back in business. In Manbij, the group carried out a bombing that claimed 19 victims, including four Americans. Having emerged in Iraq, Daesh has served as a convenient tool to turn the Syrian crisis into what it is today. Since the organization seized control of large chunks of territory in Iraq and Syria, a four-year campaign reduced it to rubble.Yet there is a clear attempt now to breathe new life into the near-dead terrorists. It is no secret that various intelligence agencies have used Daesh to accomplish their goals. Clearly, the group's comeback in Manbij was closely related to U.S. President Donald Trump's decision to withdraw from Syria. To identify the puppet masters behind the assault, all one has to do is find out who opposes the U.S. withdrawal and remember that the terrorist organization, the People's Protection Units (YPG) who are the PKK's Syrian affiliate, recently threatened to release thousands of Daesh fighters from their custody. It wouldn't hurt to recall that certain Gulf states have also been subtly putting Hayat Tahrir al-Sham (HTS) into motion.

Last week's bombing encouraged all parties that have been exploiting Daesh terrorism for three years. Some observers say that the U.S. must abort its withdrawal because Daesh hasn't been completely defeated yet. Others think that the withdrawal is indeed a good idea. Finally, there are commentators who blame the whole thing on Turkey.

In his Washington Post column, David Ignatius claimed that Turkey's military pressure and attacks by the Turkish-backed Free Syrian Army (FSA) had facilitated the Daesh attack. "Worried about Turkish threats," he argues, the YPG militants "couldn't concentrate full-time" on the fight against Daesh and weakened local security. Ignatius adds that "Turkey's obsession" with the PKK/YPG threat "may have helped put U.S. forces at risk." Finally, The Washington Post columnist recalls U.S. Secretary of State Mike Pompeo's speech in Cairo –"when America retreats, chaos often follows"– and urges Trump not to "abandon the sacrifices Americans have made" in northern Syria.

The United States followed misguided policies in response to the rise of Daesh and during attempts to finish off the group. U.S. invasions of Iraq and Afghanistan created hotbeds of radicalism in the Middle East. It is no secret that Daesh militants joined forces in Iraqi prisons. Yet the Obama administration bears more responsibility than any other side for failing to manage the fallout of the Arab revolts. At the time, Washington adhered to a policy that facilitated the spread of militias, proxies and terrorist organizations from Libya to Syria and Yemen. To make matters worse, the White House openly supported a terrorist organization, the PKK/YPG, in the name of fighting Daesh, ignoring repeated warnings by Turkey, its strategic partner.

Today, as Washington mulls over withdrawing its troops from Syria, Turkey tries to figure out how to address a terror threat that its NATO ally has fueled in recent years. The Turks have to try and decide what to do if the U.S. fails to keep its promise to take back American weapons from the YPG militants. Indeed, Mike Pompeo is right: the U.S. withdrawal fuels chaos in Syria. But what the Americans did in Iraq and Syria, not the withdrawal itself, is to blame. Having armed a designated terrorist organization with thousands of truckloads of weapons, the U.S. is now attempting to eliminate the negative side effects of its misguided policy.

For those reasons, Ignatius' attempt to assign blame to Turkey was laughable at best. Accusing Turkey, which launched Operation Euphrates Shield against Daesh and seeks to take over the fight against Daesh when the U.S. withdraws, is nothing more than PKK/YPG propaganda.

Meanwhile, a senior leader of the Democratic Union Party (PYD), Saleh Muslum, whom the U.S. continues to protect, keeps issuing threats involving Daesh prisoners in their custody. If Turkish troops set foot in northern Syria, he says, the PKK/YPG might free Daesh prisoners. Those excuses won't cover up the truth.

Whether or not Washington leaves northern Syria, it is compelled to work with Turkey in the area. The Americans must coordinate their actions with the Turks to solve the problems they created and prevent the chaos that their withdrawal could possibly fuel.