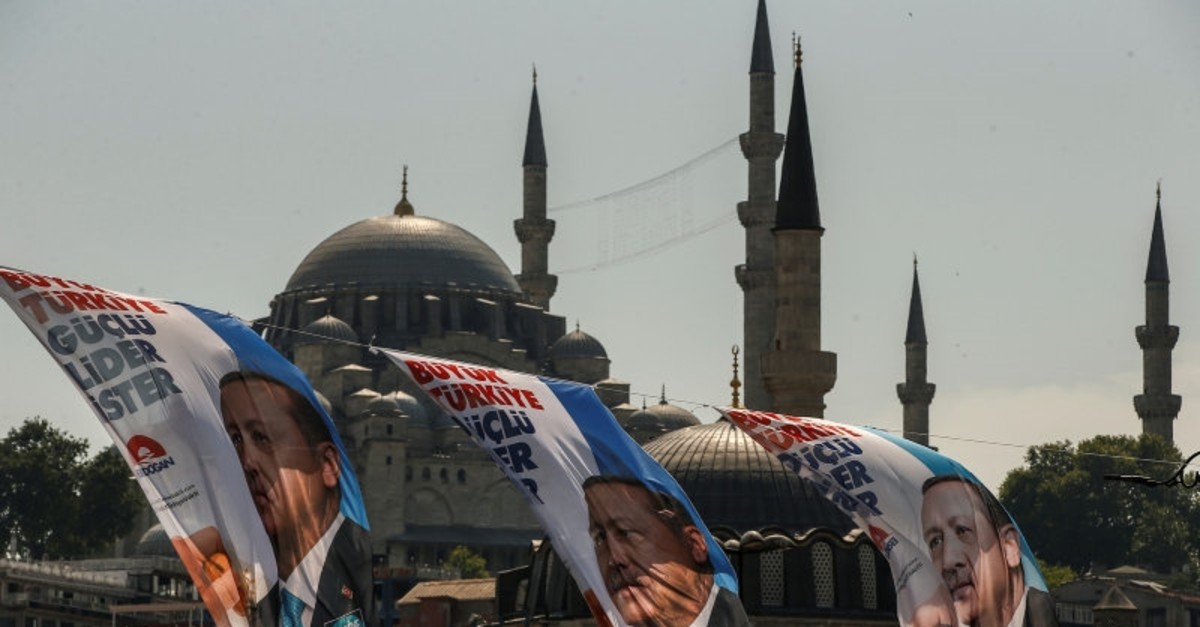 Election posters of President Recep Tayyip Erdou011fan, also the chairman of the Justice and Development Party (AK Party), decorate a street in Istanbul, June 6, 2018.
by Burhanettin Duran May 13, 2019 12:06 am

The key to success for the candidates in the neck-and-neck race in Istanbul is to keep their supporters motivated and excited, while keeping their campaigns positive

The Turkish electoral authority's decision to annul the Istanbul mayoral race kicked off the campaign season anew. Over the next weeks, Binali Yıldırım and Ekrem Imamoğlu will compete in a neck-and-neck race. Without a doubt, they will use every word and tactic to finish first. For both candidates, the top priority will be to remotivate their supporters. Other items on their agenda will be to convince some 1.7 million voters, who did not participate in the original election, to turn out and to reduce the number of invalid votes. At the same time, the mayoral candidates will focus their attention on Kurdish voters and supporters of the Felicity Party (SP). Finally, both sides will try to win over their opponent's supporters – which is a difficult yet inevitable task.

It is highly likely that the leaders of all major parties will set up camp in Istanbul until the rerun. President Recep Tayyip Erdoğan, along with the Nationalist Movement Party (MHP) leader Devlet Bahçeli and main opposition leader Kemal Kılıçdaroğlu will be on the ground. It is true that merely a local election will take place on June 23 and nothing will be decided but Istanbul's next mayor. Yet the rerun will be particularly interesting due to its high symbolic value. After all, the lessons of the March 31 election are still fresh in the memories of the major political parties. Those lessons will no doubt influence their campaigns in Istanbul. Leaders' attitudes, the prominence of the mayoral candidates, and changes and continuity in campaign messaging will be the subject of much curiosity.

Although national politics will play an important role in the June 23 election, the mayoral race will be nonetheless a clash of micro-level tactical choices. Candidates will reach out to nongovernmental organizations (NGOs), religious congregations and other social groups. There will be initial interest in the reasons behind the rerun. Both sides stress their commitment to democracy and the ballot box. Imamoğlu will surely paint himself as a victim and incorporate his allegations into the campaign. Yıldırım, in turn, will highlight the systematic irregularities with the original vote and remind voters that the election plot was uncovered and the vote rerun to permit Istanbul's residents to speak their minds freely. The former prime minister will use his public persona and inclusive language to underline his track record and respect for various lifestyles.

The key to success for both candidates is to keep their supporters motivated and excited. In this sense, the June 23 election will be a battle of esprits de corps. Both sides will make symbolic overtures to their opponent's base and use inclusive language. More importantly, they will try to demoralize the opposing side. For example, the Republican People's Party (CHP) will aim to undermine the Justice and Development Party (AK Party) base's morale to ensure a comfortable win for Imamoğlu and call for an early national election. The main opposition party will seek to exploit the electoral board's decision to start a public debate on the state of Turkish democracy and seize the moral high ground by painting themselves as victims. They are already using business leaders, artists and social media to convey that message.

The neck-and-neck race in Istanbul will be decided by each side's ability to mobilize voters. Many voters who did not participate in the March 31 election were former AK Party supporters. As such, the opposition will work hard to demoralize the AK Party base.

Hopefully, the AK Party supporters who focus on negatives during the campaign know that they are playing into the opposite side's hands.