To stop PKK terrorism, acknowledge the plight of Kurdish parents 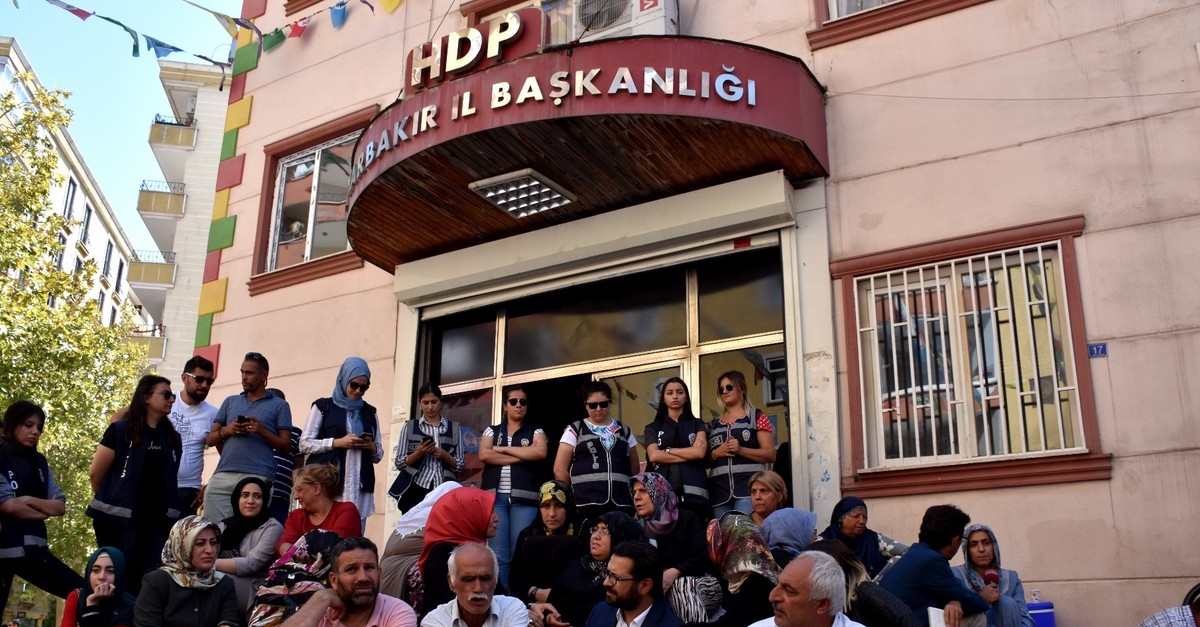 Families whose children were abducted by PKK terrorists hold a sit-in protest in front of the pro-PKK Peoples' Democratic Party (HDP) headquarters in Diyarbaku0131r, Sept. 6, 2019.
by Burhanettin Duran Sep 09, 2019 1:36 am

The Kurdish mothers' protest in Diyarbakır teaches valuable lessons to the opposition, which is busy playing the three monkeys and seeing no evil

Hacire Akar, who launched a sit-in last week to take back her son from the PKK terrorist organization, forced the Peoples' Democratic Party (HDP) to temporarily shut down its Diyarbakır offices. It wasn't just the party's office that was closed, however. The hearts of opinion leaders and elites also turned out to be sealed shut.

We owe it to the Kurdish parents, whose children have been forcibly recruited into the PKK, to stand in solidarity with them – as fellow human beings and as citizens. How can we ignore the tragedy of terrorism's other victims? Those who ignore the plight of Kurdish mothers let politics rot their conscience.

The Kurdish mothers' protest teaches valuable lessons to the opposition, which is busy playing the three monkeys and seeing no evil. First of all, this is exactly the type of "democratic pressure" that the HDP deserves for failing to distance itself from terrorists. It also became clear that the crackdown on PKK-linked groups in recent years has made life easier for people in southeastern Turkey. Finally, the protest demonstrated that the HDP elites, who claim to represent the Kurds, are actually just strangers.

The Kurdish mothers criticized HDP politicians by saying that they sent their own children to private school and the kids of ordinary Kurds to the mountains. "Down with your Kurdistan cause," one of the mothers could be heard screaming outside the HDP headquarters in Diyarbakır. This is a precursor of that party's ideological demise. Politicians must support the legendary efforts of the Kurdish mothers today. Popular pressure must keep building up to sentence terrorists in the court of public opinion.

Oral Çalışlar, a columnist for Posta, wrote last week that the first and most basic response to ethnic issues must be to "disarm armed groups resorting in terrorism." He identified Northern Ireland, Spain, Colombia and South Africa as noteworthy cases. Çalışlar dismissed efforts to mount pressure on the HDP over its links to the PKK as a revival of the old "securitization" agenda and claimed that the HDP represented an opportunity to "cleanse the issue from violence" – in other words, to disarm the PKK.

I disagree with Çalışlar's position for three reasons. First, the peace processes of 2009 and 2013 demonstrated that the HDP is unable to operate independently of the PKK's military leadership in northern Iraq. HDP politicians either volunteered or bowed to PKK pressure to dig trenches in city centers in the past. The armed militants in the mountains still control the politicians on the streets. As a matter of fact, the PKK has a long history of silencing rival Kurdish nationalists with extreme violence. There is no reason to believe that the HDP can exert the slightest influence on the PKK – not with violent conflicts raging on in neighboring Syria and Iraq. The opposite, by contrast, is always true.

Another problem with Çalışlar's argument is that the steady supply of weapons from the United States – via the PKK's Syrian branch, the People's Protection Units (YPG) – and Washington's eagerness to outsource Iran's containment to the group give the PKK no reason to lay down its arms. The group could arguably not disarm even if it wanted. Neither their dream of "statehood," nor their role as mercenaries, would allow for disarmament. Even a temporary suspension of violence in Turkey cannot significantly contribute to this issue's resolution. Instead of building towards peace, the terrorists would win time to relaunch their deadly campaign when the opportunity presents itself. At the same time, the PKK would continue to forcibly recruit young Kurds and Arabs in Syria and Iraq.

Last but not least, the success stories from around the world have nothing in common with the PKK's current position in the region. The IRA and ETA only laid down their arms when they could no longer rely on support networks in neighboring countries.

For those reasons, there is no point in mitigating the popular pressure on HDP right now. If anything, politicians across the spectrum must double down on this "democratizing agenda." The Republican People's Party (CHP) and other opposition parties, which vocally objected to the dismissal of HDP mayors, undermine the fight against terrorism by ignoring the plight of the PKK's victims. To acknowledge the suffering of Kurdish mothers would help to convict terrorists in the court of public opinion.

Let me add that terrorist groups do not lay down their arms through dialogue alone. They must be defeated with force and convicted in the public eye before they are compelled to negotiate terms. The path to a peaceful resolution will remain blocked until politicians, who advocate the nationalist agenda of Turkey's Kurds, are liberated from the yoke of the HDP and PKK overseers.

Burhanettin Duran is General Coordinator of SETA Foundation and a professor at Ibn Haldun University. He is also a member of Turkish Presidency Security and Foreign Policies Council.
Last Update: Sep 10, 2019 12:40 am
RELATED TOPICS