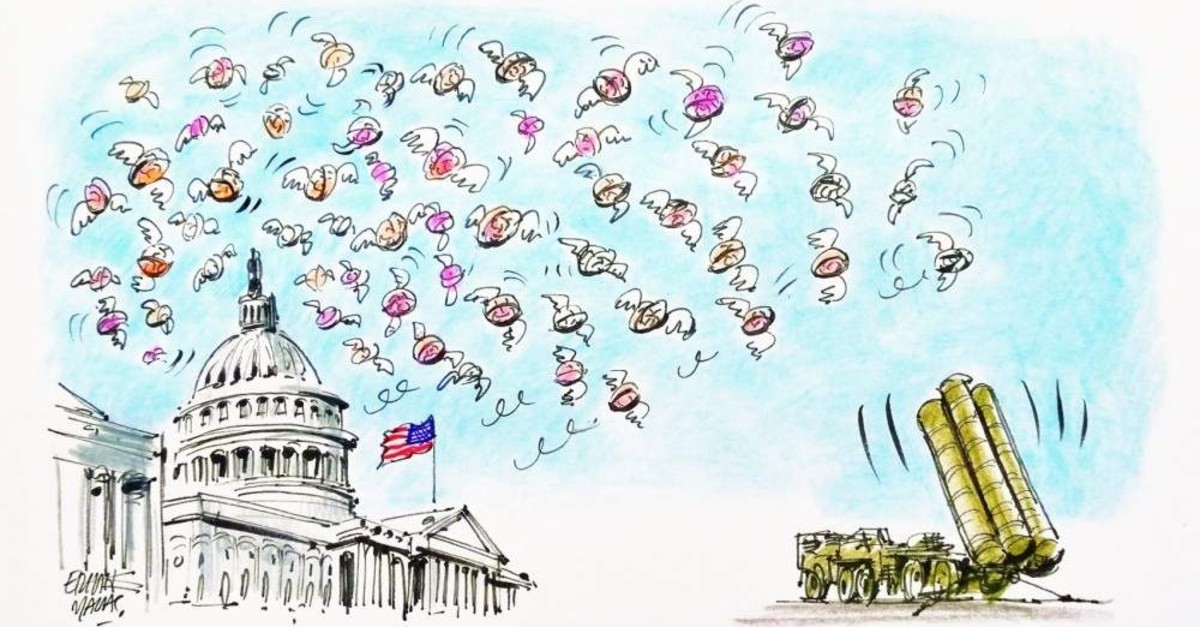 by Burhanettin Duran Dec 14, 2019 1:52 am
The U.S. Congress, acting under the influences of anti-Turkey sentiment in Washington, is back in the game. On Oct. 29, the House of Representatives passed, with overwhelming support, a bill to impose sanctions on Turkey. Earlier this week, the Senate Committee on Foreign Relations adopted a sanctions resolution, which many observers expect Senate to pass in the coming days and present to President Donald Trump. If the Senate holds a vote on the bill, some believe there will be enough support to prevent a potential presidential veto. In that case, Trump will have a choice between keeping the resolution on hold and picking five out of 12 sanctions under the Countering America’s Adversaries Through Sanctions Act (CAATSA).
The reasons behind the latest sanctions bill included Turkey’s procurement of the Russian S-400 air defense system and the Turkish counterterrorism operation in northern Syria, dubbed Operation Peace Spring.
The Americans believe that the Russian system will expose the secrets of the F-35 fighter jet, Washington’s only 5th-generation aircraft project, thereby ending NATO’s air supremacy. Turkey’s response, however, is that it bought military equipment from Russia because its own allies refused to sell to the Turks, who have no reason to hurt the F-35 project or NATO’s air power – as the former’s project partner and the latter’s long-standing member.
In his last trip to Washington, Turkish President Recep Tayyip Erdoğan had agreed with Trump to form a joint commission to investigate the potential technical conflicts between the S-400 and F-35. The Senate, however, took measures without waiting for the committee’s findings. If adopted, the resolution will not only exclude Turkey from the F-35 program but also target that country’s defense industry and energy sector under CAATSA. In other words, the American legislative aims to punish Turkey rather than look out for the best interests of the U.S. and NATO.
Congress has the potential to inflict very serious damage to Turkey-U.S. relations. Through several punitive measures, it threatens to derail the bilateral relationship. There are many reasons why we ended up here: First of all, traditionally pro-Turkey lobbyists have changed sides in recent years. There is also an anti-Russia sentiment due to the controversy surrounding the 2016 U.S. presidential election. Looking at Turkey’s move to procure the S-400 system, the Senate sees an effort to strengthen Moscow’s role in the international arms market. Again, the Pentagon’s engagement with the People's Protection Units (YPG), the terrorist PKK’s Syrian offshoot, has a negative impact on U.S. relations with Turkey. What the U.S. Congress tries to do now could thus result in severe damage, which would take decades to mend.
Members of the legislative branch, who like to challenge President Trump on matters of foreign policy, invoke Turkey in the context of domestic politics. Even Republicans mount pressure on the White House over Turkey, giving Trump, who faces impeachment, even less room for maneuver. It is impossible to make sense of this chaos, which uninformed politicians have unleashed on Turkey-U.S. relations, through strategic assessment. This is an eclipse of reason in American politics – Congress, kneedeep in anger and narrow interests, undermining long-term U.S. interests. Sadly enough, there is no safety net against such actions in Washington. The fact that Trump can identify America’s strategic interests better than Congress and America’s top agencies is one of the great contradictions of the U.S.
The policymakers in Washington fail to understand that their attempts to punish Turkey for allegedly aligning with Russia only serves to push the Turks closer to Moscow. They do not grasp either that targeting a U.S. ally with sanctions raises serious questions about Washington’s reliability. Ironically, the folks at the U.S. capital conveniently ignore how they have been alienating Turkey since 2013, thanks to their own policy on Russia, Syria, the YPG and the Gülenist Terror Group (FETÖ), to complain about Turkey’s rapprochement with Moscow. To make matters worse, the "solution" they find to this problem is to impose sanctions, which could ultimately strengthen Ankara’s cooperation with Russia. This is a vicious circle.
The U.S. move to get Russia involved in the Syrian civil war came with a heavy price tag for Turkey. Four years later, Washington moves to further alienate Turkey based on their own policy’s inevitable outcome. Let us hope that Donald Trump will find a way to mitigate the damage.

Burhanettin Duran is General Coordinator of SETA Foundation and a professor at Ibn Haldun University. He is also a member of Turkish Presidency Security and Foreign Policies Council.
Last Update: Dec 20, 2019 2:22 am
RELATED TOPICS