A traitor or a hero? The execution of Sheikh Said 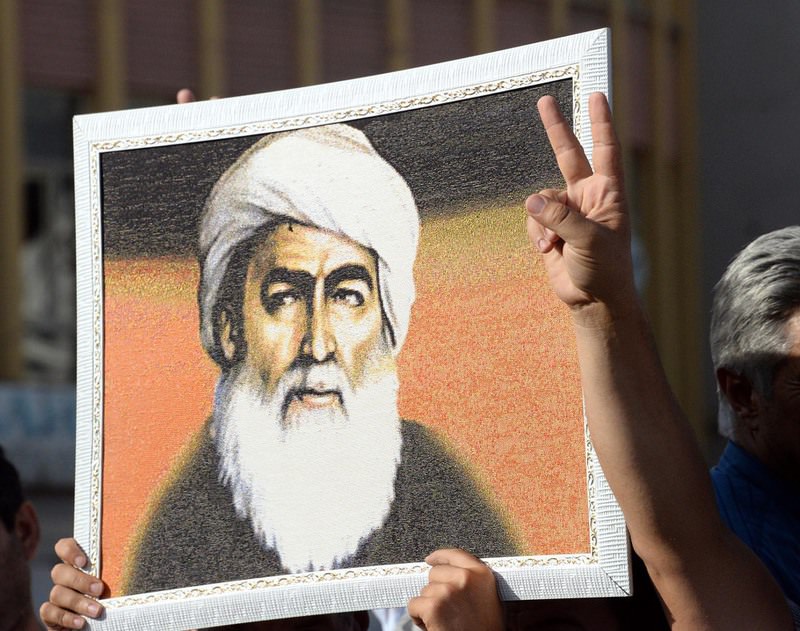 The commemoration held in Diyarbaku0131r for the 91st anniversary of the execution of Sheikh Said.
by Ekrem Buğra Ekinci Jul 03, 2015 12:00 am

June 29 marked the execution anniversary of Sheikh Said. He was labeled as a British spy and separatist traitor by the official discourse of the Republic. However, he was considered a hero by the Kurdish people and a man who sacrificed his life for the sake of his ideals. As opposed to the popular belief, his rebellion started from a simple, local incident, and was not an organized nationalist or religious movement

The rebellions of the Greeks and Serbians and their declarations of independence after living under Turkish rule for five centuries made the Ottoman Empire anxious, which caused them to begin following a centralist policy to hold the empire together. However, the administrative autonomy of Kurdish beys (feudal lords) was revoked in 1847. The reason behind the rebellions prompted by Kurdish beys, such as Bedirhan Bey, was not Kurdish nationalism, but the stripping of this autonomy. Following the revoke of the Kurdish beys' administrative autonomy, Armenians who were residing in Eastern Anatolia and had earned considerable capital thanks to their commercial affairs, gained an economic advantage in the region.

They became even stronger by winning tenders for land rents that were gathered by contractors who pledged to pay the highest payment to the government. This caused displeasure among Kurds and created tension between the Kurds and the Armenians, which paved the way to provocations by international powers. Sultan Abdülhamid II preferred to please the Kurds and established the Hamidiye Regiments, which were comprised of Kurdish men, in order to use these regiments as a militia against Russia in case it ever invaded Eastern Anatolia. The racist policy of the Committee of Union and Progress, which came to power after 1908, awakened nationalistic ideas among the Kurds as well as the Arabs. Sheikh Selim and 30 of his comrades, many of whom descended from Prophet Muhammad, were hanged as a result of an incident that occurred in Bitlis in 1913, as well as Sheikh Abdüsselam Barzani, the grandfather of the Iraqi Kurdish politician Masoud Barzani, and five of his friends who were hanged in Baghdad in 1914. However, nationalistic intellectuals were not popular among conservative Kurds due to modern ideas of these intellectuals. The lands and power of the Armenians, who were forced to migrate in 1915, were partially taken over by the Kurds again.

Kurds took sides with the Ottoman government during World War I; they were the only ones who did not abandon the caliphate. Following 1918, several state-funded or controlled societies were established to prevent the dissolution of the country as well as to defend the rights of the Kurds. The Society for the Rise of Kurdistan was the most important. It was founded by Sheikh Syed Abdülkadir, one of the most powerful sheikhs and agha in the east. He also ran a ministry in the government during that time. He favored autonomous Kurdistan under the rule of the Ottoman caliphate, as it used to be, instead of a British-supported independent Kurdistan. He convinced the Kurds to attend the Turkish nationalistic congresses held in the provinces of Erzurum and Sivas in order to prevent Eastern Anatolia from defecting to a possible Armenian state in the region. As a result, he held great influence over the Kurdish tribes. But this influence did not do him any good; on the contrary, it cost him his life.

The Entente of World War I promised autonomy to the Kurds as they did to the Armenians. However, the British came to terms with the government in Ankara after World War I and gave up this idea. Just like the Armenians, they forsake the Kurds. Ottoman statesman Şerif Pasha, who was a member of a rooted Kurdish family from Sulaymaniyah, attended the conference in Sevres in 1920 and worked hard to advocate for an autonomous Kurdish state, but was not successful. Nonetheless, Kurdish nationalism continued gaining strength due to the racist policies of the Republican era. The biggest problem vexing the Kurds was not only Ankara's racist policies but also its anti-religious practices. The Kurds began to question the connection between them and the Turks once the religious connection was broken. However, racist-religious duality kept continuing strongly in Kurdish society. Therefore, dozens of Kurdish uprisings took place in the early Republican era, not as a result of a nationalistic movement but the growing of simple incidents. One of the most significant uprisings was the Sheikh Said Rebellion, which caused Ankara much trouble and grief.

Sheikh Said was a Naqshbandi sheikh and a village agha (landlord) living in the Palu district of Elaziz (present-day Elazığ). As he was a descendant of Muhammad, he had a great influence over the region. The tribes that he ruled, which were called Zazas, were quite often thought to be collateral of the Kurds. Some soldiers of the gendarme caused a reaction in the region when a few of them abused at some women during a tribal wedding in a village of Diyarbekir (present-day Diyarbakır) at the beginning of 1925, resulting in agitated young people beating up the soldiers. The commander of the military station asked Sheikh Said, who was the leader of the tribe, to hand over the perpetrators of the incident. Soon, appeared that these young people were also deserters. Sheikh Said said that all tribes were in the region due to the wedding and expressed his fear that the incident would turn into a larger problem. He assured the gendarmerie that he would hand over the people who were responsible as soon as the wedding was over. His attitude, however, was regarded as rebellious.
Fethi Okyar, liberal prime minister, said it was simply a local incident, it should not be dramatized and it could be resolved by the local governments. The people who were not happy about the practices of the İsmet İnönü's People's Republican Party were supported him, Okyar's political rival İnönü saw this rebellion as an political opportunity and turned the incident into a government crisis. Okyar resigned from his office and İnönü returned to the prime ministry once again.
Sheikh Said, who was then labeled as a rebel, began soliciting allies for money to restore the caliphate, which had been abolished a year earlier by the government in Ankara. Some Kurdish tribes and scholars supported the sheikh, while some that were bought off withdrew the support in time and. Said Nursi, who is often mistaken for Sheikh Said, persistently declared in his works that he sided with Ankara during this rebellion. Sheikh Said mobilized with the Zazas and the Kurds that joined him on Feb. 16, 1925. He managed to capture Palu, Elaziz, Genç (present-day Bingöl), Muş and lastly Diyarbekir. He declared the son of Sultan Abdülhamid II, who was in exile in Syria, the new caliph.

After Ankara's victory, the Society for the Rise of Kurdistan was replaced by an unofficial Kurdish society called "Azadi." Sayyid Abdülkadir Efendi did not want to take part in this non-religious and separatist organization, which was established by the Kurdish officers that deserted the Ottoman army, Azadi revolted in the east at the same time as the rebellion of Sheikh Said. The Sheikh had nothing to do with this organization, but his brother-in-law, Col. Halil Bey –was the leader of the Jibran tribe and a Kurdish nationalist – did. Thus, the Sheikh Said rebellion, which was supported by the Jibrans, is mistaken for a nationalist rebellion.
Ankara repressed the uprising with great difficulty. The emergency courts tried 420 people and sentenced them to death. While the court acquitted some people, who were Kurdish nationalists, Sheikh Said was sentenced to death in 28 June 1925, with the charge of being a Kurdish nationalist; he was executed in 20 September 1925. His body was buried in an unknown place within the military post in Dağkapı. Moreover, Syed Abdülkadir and his son were taken from their house in Istanbul, brought to Diyarbekir and hanged in front of the Ulu Mosque, even though they had nothing to do with the rebellion. The executions continued for months. The Kurdish villages in the rebellion region were bombed, and thousands of people who were not related to the revolt directly were killed. The families and tribes of Syed Abdülkadir, who was seen as the mastermind behind the rebellion, and Sheikh Said, who was considered the instigator of the revolt, were split up. It was claimed that the revolt was encouraged by the free environment generated by democracy and the liberal statements of the opposition party.

Furthermore, during the trial, Sheikh Said was promised acquittal if he said he was inspired by the Istanbul-based journals for the rebellion. At the time, it was not determined whether Mosul, the petroleum basin, was to remain within Turkish borders or to be given to the British. The Ankara Government claimed that the rebellion was supported by the British to prevent the Turkish Army from entering Mosul. In the following periods, they tried to plant fear with a different image in the public's ideas depending to the situation and time by claiming that, according to the situation and the time, Sheikh Said was a Kurdish nationalist, a follower of sharia or a supporter of the British. Hence, the Sheikh Said rebellion began as a small, local incident; it was not a revolt that had been planned in detail. The Sheikh always underscored this during his trial. The religious scholars of the time acknowledged Sheikh Said to be right, but they criticized him for revolting against powers that he could not overcome. Moreover, Islam forbids man to endanger his own life and attack an enemy that is stronger than him. On the occasion of this rebellion, Ankara passed the "Law on the Maintenance of Order" (Takrir-i Sukun Kanunu) and banned all political parties. The government then dissolved the Okyar's Liberal Progressive Republican Party and suspended democracy. The freedom of the press was removed; all opposing press members were arrested and jailed. The opposition was also repressed. The leaders of the tribes as well as all religious scholars residing in the east were exiled to the west to prevent their influence on the local people, and some of them never returned to their homeland. Anti-religious policy became stronger. The dervish lodges were closed. In turn, the country was turned into a rose garden without thorns for the People's Republican Party (CHP).