The Roma: A life of constant travel 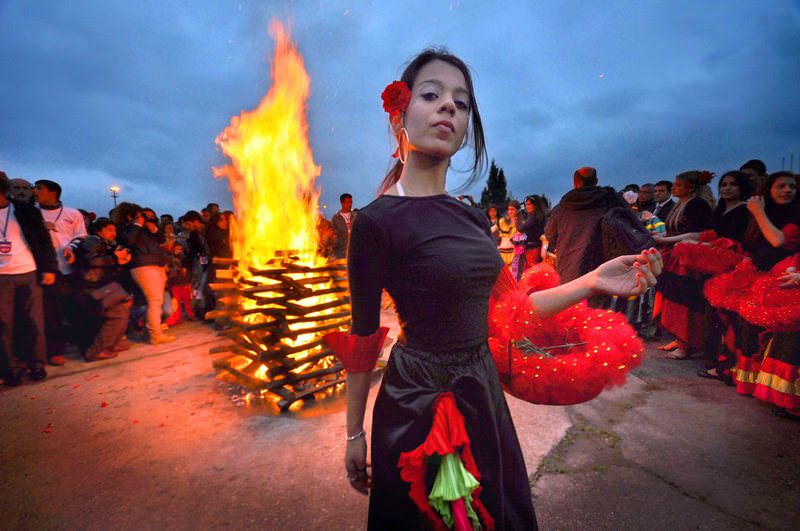 The nomadic but colorful world of the Roma has always remained intriguing. In 15th century Istanbul, there were skilled Roma artists and army tradesmen who were treated well in the society. Pointing to Roma's adaptable nature, famous Ottoman-era traveler Evliya Çelebi once said: 'They celebrate Qurban Bayram with Muslims, Easter with Christians and Hanukkah with Jews'

An aria in Johann Strauss's operetta "The Gypsy Baron" starts: "Only gypsies are so loyal and so desperate." Whether true or not, this statement from the libretto by Ignaz Schnitzer reflects that the Roma have spread from India to Britain and been living a nomadic life that was never seen before in those areas. The Roma were once believed to be descended from Egypt and so were called "gypsy," which comes from the local word for "Coptic" or "Egyptian." In reality, the Roma were a community that spread out from northern India starting in the ninth century. Their origin is mostly associated with the Indian campaign of Sultan Mahmud of Ghazni. The Roma, who apparently belonged to the lowest Indian social stratum, extended in two separate branches - one of them went to Europe through Russia in the 14th century and the other to North Africa and Spain through Iran. There are also Roma in the U.S. and Japan. Their total population is estimated to be more than 12 million.

Roma are referred to with different names around the world: Turks call them "Çingene" from the Persian as "Chingane," Arabs as "Gacari," the French as "Tsiganes" or "Bohemiens," Byzantines called them "Atbinganoi" Hungarians "Chiganz," Italians "Zingaro," Germans "Zigeuner," British "Gypsy," Polish "Cygan," Hungarians "Cziganyok," Spanish "Gitona," Romanians "Faraon," Russians call them "Tsigan" and Greeks call them "tsinganos," which must have inspired these languages. Anyway, there is a word, "chingan," in old Turkic that means "poor." In the Caucasus and eastern Anatolia, Roma are called "poşa" and they are known with different names in various parts of Anatolia such as "mıtrıp," "kareçi," "abdal," and çerge."

Roma call themselves "Romani" and "Rom" means "man" in Romani. They often have black hair and eyes and some look like Indians with their dark skin. They have their own language, but also know the languages spoken in the countries that they live in. The unwritten Roma language has different dialects and varies according to region. Although they have their own religion, there are Roma who assumed the religion of the places they live in. They maintain a nomadic life in tents or caravans, though in winter they gather around urban areas.

Roma are divided into tribes and families. Usually, around 200 families form a tribe (vitsa). All of them have a board of alderman (kris) that decide the travel route and organize what to do, and a "mother" (phuni dai) with whom they consult. Solidarity and economic collaboration is very important among the Roma. Also, the Roma are monogamists and have multiple children. They teach their children to get used to all living conditions and are famous for bathing their newborns in cold water to make them used to the cold. They have strict principles and punish those who do not obey them, and the most severe punishment for the Roma is exile and dismissal from the tribe.

Roma men craft household items such as griddles, baskets, tongs and shovels while women wander around to sell them. Moreover, there are many Roma who earn their living playing instruments, working as tinsmiths, dancing, selling flowers and fortune telling. As they mastered animal health, everybody consults their expertise and medicine. Music is the Roma specialization, however. Roma music has highly emotional melodies and is sung with various instruments, from the guitar to the accordion, violin and clarinet. Their music often features rhythms and dance songs that gradually pick up speed. It also has rich themes inspired by different cultures, while at the same time, from Russia to Spain, European folk music was seriously affected by Roma music. In fact, flamenco owes its development to the Roma of Andalucía.

Their colorful lives have been the subject of novels, poems, plays, operettas and films. As the heart wants what the heart wants, a typical theme is one where a young noble falls in love with a Roma girl who turns out to be a noblewoman that was kidnapped by other Roma people. In any case, the story ends with a happy ending and from the novel "Paprika" to the operetta "The Gypsy Baron," the story is always the same.

Like all nomads, Roma have been despised due to their alternative lifestyle and were seen as the reason behind various disasters. The first systematic holocaust against the Roma began in Germany. In 1899, the Central Office for the Fight against the Gypsies was founded in Munich, and collected information on the community, including fingerprints. The Nazis massacred 400,000 Roma in an incident known as "porrajmos." In countries behind the Iron Curtain they were forced to settle, and even today, Roma are not allowed to camp in Italy and France. Even though they were treated as an unwanted community almost everywhere they went, they managed to protect their cultural identity. They call those who are not one of them "gace," which means "fool" and look down on them in their way.

Today they are divided into three main branches based on culture: The Kalderash who live in Central Europe and the Balkans and are mostly involved in ironworking, the Gitans who live on the Iberia Peninsula and are masters of entertainment and the Manouches who live in Western Europe and are involved in animal training in circuses.

Most of them have adopted a sedentary life, and those who did not became motorized. However, they have not changed their unconstrained and carefree life philosophy.

Constantinople's first Roma was a vet named Simon who was brought from Georgia to treat wild animals suffering from contagious disease at a zoo upon the order of Byzantine emperor Constantine IX Monomachos. His Georgian title "ansincani," meaning "magician," takes its origin from "atzinganoi," the Greek word for Roma.

During the reign of Mehmed the Conqueror, dozens of Roma settled in Istanbul. As in other countries, the public was afraid of them, but they were never treated badly. They were skilled artists and many Roma worked as army tradesmen. Mehmed the Conqueror's Code of Law specified that Roma were obliged to pay less tax than usual and those working for the army did not pay any tax at all. Nomadic and sedentary Roma, called "Kıptiyan" in Ottoman, settled along what is now the Turkish-Greek-Bulgaria border, which belonged to a civil establishment called the Sanjak of the Roma. The head of the group lived in Kırklareli in Thrace and was responsible for communication between the Roma community and the central administration. Toward the end of the 15th century, there were 3,237 Roma families there. Each tribe in the community had a headman called "çeribaşı."

From the end of the 16th century, some Roma living in the cities were forced into exile due to certain criminal elements like thieves, prostitutes and kidnappers. In Turkish, the word "çingene" has been used to describe stingy and incompatible people who do not look after themselves. In 1695, the number of Roma was 9,000 households in Rumelia and was 45,000 households in 1854. Following the wars in Greece, many Roma migrated to Turkey. However, they did not receive the same permissive treatment during the Republican period as they saw in the Ottoman Empire, though were regarded as a community that disrupts public welfare, as beggars and dilly-dalliers.

Roma generally engage in fortune-telling, ironworking and entertainment by teaching bears how to dance. Over the years, many of them were settled down as permanent residents. Roma in Istanbul live in certain neighborhoods. They speak Turkish but with a different accent. They live together in constant dispute, as those who settled down consider themselves superior and despise the ordinary life of nomadic Roma. In central Anatolia, some of them have adopted Alevism and are called "Abdal," but they have never been recognized by Alevis. Famous Ottoman-era traveler Evliya Çelebi described Roma thusly: "They celebrate Qurban Bayram with Muslims, Easter with Christians and Hanukah with Jews." Today, most of them are Muslim and are not much different from Turks. The Sulukule neighborhood facing the Walls of Constantinople was until recently the liveliest Roma neighborhoods thanks to their colorful musical world. Even in classical Turkish music you can hear melodies from Roma music. Many musicians, including composers and performers, are Roma.
Last Update: Mar 25, 2016 1:53 am
RELATED TOPICS