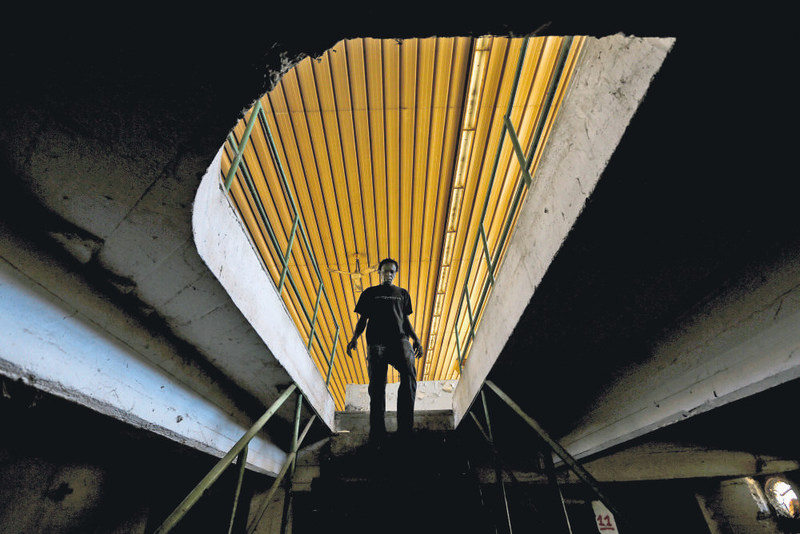 A Sudanese immigrant walks down stairs at his shelter in the western Greek town of Patras.
by Emre Gönen May 19, 2015 12:00 am

While chaos and instability are spreading all over the Middle East and partly North Africa, it is absurd to think that nearby regions will not be affected from this

Realpolitik has its limits. It was a necessity in the bipolar World. The political stability of the entire planet was based on the deterrence of weapons of mass destruction. Realpolitik was a viable option, to keep the modus vivendi going.

This was not at all an ideal situation, but most societal problems were pushed to one side at Yalta. The populations of both the political and military camps were not at all at ease with such solutions and pragmatic approaches. There are numerous examples that could be listed, from colonial wars to the anti-Soviet uprisings of 1956 and 1968. However, the aspirations of people for more democracy, liberalism, pluralism and freedom were forgotten for the more pressing concern of avoiding another deadly world war.

With the disappearance of the Soviet system and the end of the bipolar power balance, basic human rights and liberties steadily acquired a more pronounced importance in international relations. However, recourse to "realpolitiking" - basically not doing much - when an urgent or concerted international intervention is needed instead, remains very strong and very attractive. Particularly when the interests of regions and countries that had a strategic importance in the recent past, like Somalia or Yemen, are at stake, no one really wants to get involved. Failed states are growing in number and whole regions are generally acknowledged as "unstable domains." Gaza is one of them, but Sudan and a number of other African countries can also be cited as "lost causes." In Burma (whose name was changed to Myanmar but whose inhumane regime remained pretty much unchanged), a totally anachronistic military dictatorship prevents Aung San Suu Kyi to gaining power, whereas she has won every democratic or semi-democratic contest organized in her country for the last 25 years. Myanmar is an isolated South Asian country, with no petroleum or strategic location.

Libya is not isolated and without oil, neither is Egypt strategically unimportant. Libya has been divided into two, there is one government in Tobruk and another in Tripoli. The Egyptian society is also deeply divided, the president, who was elected in the first real democratic elections, Mohammed Morsi, has been sentenced to death by a simulacra of a tribunal. The general who staged the coup and who was subsequently elected through carefully-planned and managed elections is the new "Rais." Now the EU is in need of as much help as it can get from Gen. el-Sissi, who would position himself as the new strong man of the region, as well as needing a blank check from the Libyan authorities in order to stop the migration across the Mediterranean that threatens to overwhelm the southern European countries.

Why is there such a large wave of migration, which has seen the death of at least 1,600 people since the beginning of the year? Because Syria and Iraq are totally failed states, and Yemen has turned into a wide no-man's land where people are free to destroy each other. What will be done to remedy the situation in these countries, in Libya and in Egypt? Basically not much, after four and a half years of prevarications, some initiatives are in the pipeline for some parts of Syria. Iraq tries to have a less inept central government, to fix what it can in the country and to fight against ISIS. Yemen has become a theater of conflict between Iran and the coalition led by Saudi Arabia. Libya could have been salvaged, if Western countries had enough courage and political will to assist the regime after Gadhafi and send minimal help for the transition towards democracy. Egypt is a huge shame - nobody can seriously envisage that a regime condemning to death its first democratically-elected President can become a hub for anything other than autocracy, violence, hatred and instability. Within this maelstrom of violence and instability, the EU tries to play some sort of role. European Ministers for Foreign Affairs and Defence are expected to pave the way for setting up a Common Security and Defence Policy (CSDP) mission that will seek to "destroy the economic model" used by traffickers that cross the Mediterranean to the jeopardy of migrants. The initiative looks ridiculous compared to the magnitude of the tragedy, but at least some countries have started to say "enough is enough."
RELATED TOPICS