Could peace be enforced? 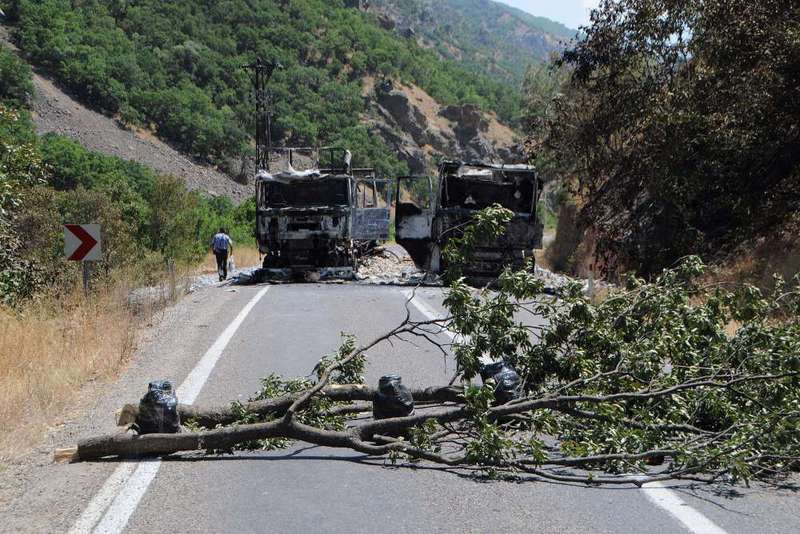 The nightmare of the resumption of violence creates significant concern among the public, most of whom cannot make sense of the escalation

Coffins covered with Turkish flags containing the bodies of dead soldiers are back on television news. Obviously, this is the most striking effect of the anti-terror war Turkey has started to wage. Not the news bulletins, not the different declarations on the part of national and international leaders and decision makers, not the losses of any terror organization and not the war planes performing airstrikes, only the coffins and people crying for them at funerals. This is what the public sees in news reports, this is what newspapers report.

I had previously written in this columns that the nightmare was back, talking about the resumption of the conflict. But this time the public, despite warmongering declarations, especially from the Nationalist Movement Party (MHP), basically sees the main dimension of the war as coffins containing the bodies of soldiers who have lost their lives before reaching the age of 25.

There are also coffins containing the bodies of dead Kurdish fighters from the Democratic Union Party's (PYD) People's Protection Units (YPG) killed by the Islamic State of Iraq and al-Sham (ISIS) in northern Syria, who are not shown frequently on television. They have families who mourn their losses. There is a wide consensus among a large majority of society that this time, this war is totally pointless.

Prime Minister Ahmet Davutoğlu has been multiplying declarations and public meetings to explain why the government had to intervene militarily against the PKK. He definitely has some very strong points, to begin with the inexplicable and terrible murder of two police officers in cold blood in Ceylanpınar. The PKK at first claimed the murder, saying that the lives of two young police officers were taken by its militants in retaliation to the suicide bomb attack in Suruç. How the death of two police officers sleeping in their flat would be retaliation for an ISIS suicide bomber remained a total mystery. There was a huge outcry against the PKK, which changed its stance totally. It rejected that the police officers were assassinated by its militants, affirming that it was "uncontrolled units" acting independently of the PKK that committed the murders. Not only is there no explanation why in the first place the PKK endorsed a terrible murder and, secondly, how would one explain the fact that an "uncontrolled unit" could have staged such a perfect assassination without the logistical support of a whole terror organization?

Too many unanswered questions remain, however even the Peoples' Democratic Party (HDP), usually more reticent to denounce PKK crimes, has taken a strong stance condemning all the violence and attempts to deviate from negotiated solutions. There is a visibly growing concern among the public regarding the resumption of armed conflict. Conventional discourse that says the state should defend itself when attacked does not create much influence on the public as it used to. Again, even the HDP agrees that the state has the right to defend itself, but that "everyone should take their finger off the trigger." This is the first time that a Kurdish political party has clearly told the PKK to put its weapons aside. Perhaps the very strong peace abiding stance of the public and of all political tendencies, will create a virtuous cycle to get Turkey out of this nightmare.

For a friendHuman life is invaluable. When we lose someone close to us, we unfortunately understand it better. These are just a few lines to say a last farewell to Tulu Gümüştekin, a friend, colleague and brilliant lawyer. She used to write columns for this newspaper, she has left us at a very young age due to a terrible illness, she will be sorely missed.
Last Update: Aug 04, 2015 2:02 am
RELATED TOPICS