The new specter in Europe 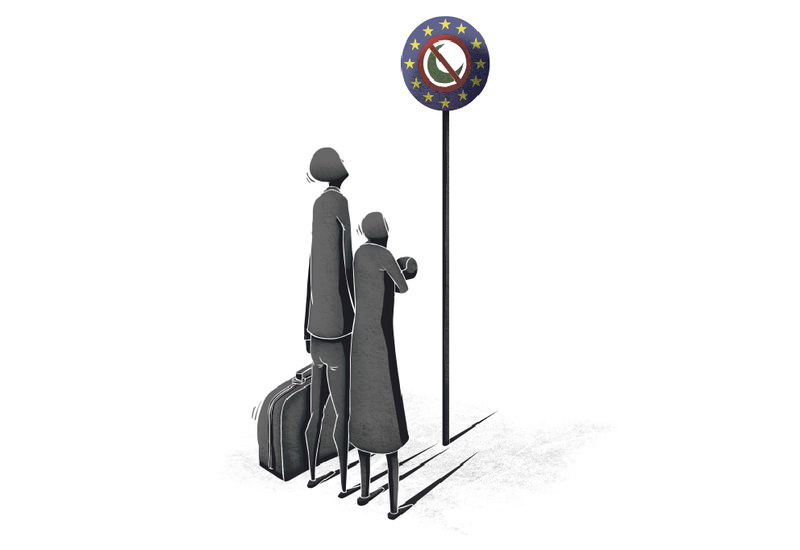 Refugees, mostly Syrian, reaching the borders of European countries, has created a new conflict between Germany and the Visegrad states on whether or not the EU should care about the refugees

The beginning of Karl Marx's famous 1948 Communist Manifest has become known to everyone over time: "A spectre is haunting Europe - the spectre of communism. All the powers of old Europe have entered into a holy alliance to exorcise this spectre: Pope and Tsar, Metternich and Guizot, French Radicals and German police-spies."

Well the specter of communism is long gone, but there is a new specter that is almost as deeply dreaded by European governments, decision-makers and a part of the public: The specter of migrants crossing their borders by the hundreds and even thousands. Migrants travel with their families, young children, some very meager belongings, and are totally hopeless trying to find a new, humane way of living for their families and children. These people carry with them only a couple of things, their qualifications and their energy to survive against all odds.

They are qualified most of the time, as very poor, unqualified people cannot afford to pay the thousands of euros or dollars to human traffickers to leave their country and travel through different countries toward the promise lands of the EU. This is usually Germany or the United Kingdom, sometimes France, Sweden or Belgium. There are either parents living in these countries, or relatives, or nobody, but legends say that jobs are easy to find and asylum rules are flexible in such a country.

Firstly, mainly migrants from Sub-Saharan Africa were trying to cross the Strait of Gibraltar on very frail crafts and boats, sinking most of the time in the high seas. These people were motivated by economic interests, their livelihood becoming impossible to sustain for a variety of reasons including political turmoil, plain poverty and climate change. Not many people in Sub-Saharan African countries are able to afford a long and arduous voyage to Europe, so the migratory influx was somehow sustainable, give or take some few hundreds of refugees losing their lives while crossing the sea.

On the other hand, European countries were somehow able to send back some of these so-called asylum seekers to their home countries. They did not encounter bad treatment most of the time, so long as their motivation for migration was purely economic. The blood and brain drain from African countries, most of the time solely motivated by a desire to live better, has been a real problem for African countries, rather than European countries. Abdoulaye Wade, the former president of Senegal, declared once that he wanted to establish medical schools giving a shortened education of five years, instead of the six-year compulsory education. This way, he thought, physicians obtaining their diploma from African universities would remain in their own countries and treat people instead of migrating to Europe. Their diplomas would not be recognized and they would not be able to monetize their competence acquired in Africa.

This situation was rather sustainable despite its oddity. It has now changed. There is a new situation ignited by three major events:

i. Climate change in Sub-Saharan countries has gone beyond sustainability; draughts followed by floods have increased migration considerably. Most of the migrants trying to reach Lampedusa, the Italian island north of the Libyan coast, are people from these countries.

ii. The real change occurred in the Middle East. Following the Arab uprisings, the intervention of foreign powers, mainly Russia and Iran, has prevented regime changes in Syria. Iraq is not a country anymore, with no tangible army and a weak central administration. Iraqis owe that to United States neo-con policy makers, who claimed to be bringing democracy to their country through military occupation. Egypt is without a democratically legitimate government, which is mainly the deed of Saudi Arabia and the U.S., who preferred anybody but the elected president, Mohammed Morsi, representing the Muslim Brotherhood. Libya has been divided into two parts with two enemy governments. Tunisia, where everything started, is better off than all the other Arab countries, but still, political uncertainty and urban terrorism remain. Yemen is not a country anymore, but an open field of warfare. An enormous population of refugees had to leave their homes and belongings to save their lives and dignity. Half of the Syrian population has been exiled, and a quarter of them live in foreign countries, mainly Turkey, but also Jordan, Lebanon and Egypt.

iii. Out of this immense refugee population, those living in Turkey have the best treatment, as continuously underlined by all official and volunteer organization officials. Still, a refugee population of more than 2 million living in a country whose language and traditions they do not know is always prone to look for better perspectives. Especially if their regular status is only that of a vague and legally undefined "guest." Their desire to reach central European countries started almost overnight when in Turkey the PKK resumed its attacks and ambushes. Refugees have very vivid memories of how the civil war and bloodshed started in their own country, so they are not at all convinced that similar things will not happen in Turkey. The new and massive wave of refugee migrants from Turkey to the EU countries, mainly Greece, and to some degree Bulgaria can be explained through this approach.

Still, the EU is not at all ready to deal with a massive refugee influx. Perhaps 100,000 refugees have successfully tried to cross EU borders illegally, but this was enough to make the alarm bells ring all over Europe.

The European Union has 28 countries now, and the entire constitutional infrastructure that has been implemented over decades remains inadequate for such a large number of member states. This was evident back in 1989 when the Berlin Wall collapsed, that in no way could the EU sustain more than 20 member states. Even this number required a huge overhaul of its internal functioning. The EU, especially after the terrible outcome of the civil war and mass killings in the former Yugoslavia, opted to do both things together - opening its doors to the former communist countries of Europe while deepening the integration with its existing members. The Maastricht system, that was foreseen - unofficially - for 12 member states at most, had to encompass first 15, then 25, then 27 and today 28 member states. The system is obviously ill suited to so many countries with so many different levels of economic, democratic and social developments. However, despite a number of deep-going structural reforms, the EU remains a collection of disparate member states for a number of important issues.
Last Update: Sep 15, 2015 2:13 am
RELATED TOPICS