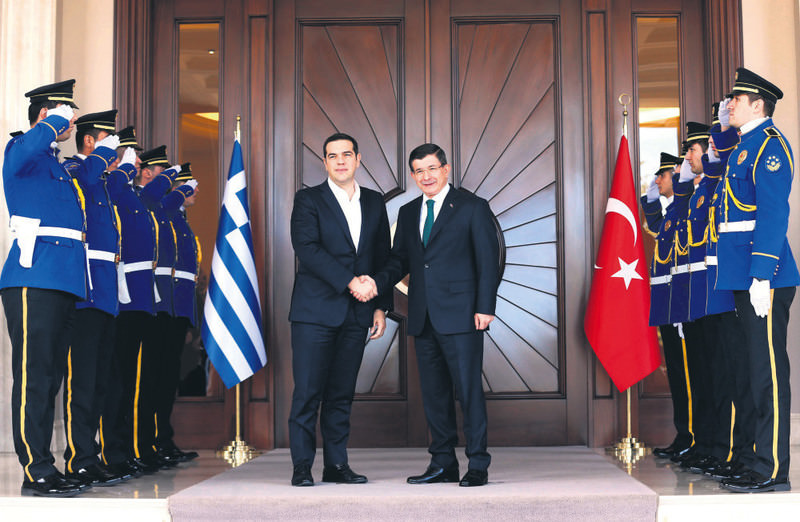 PM Ahmet Davutou011flu (R) shakes hands with his Greek counterpart Alexis Tsipras upon his arrival for a meeting in Ankara.
by Emre Gönen Nov 19, 2015 12:00 am

Greek PM Tsipras's visit to Turkey might not have a drastic impact on Turkish-Greek relations, but being neighbors, the two countries have many common issues on which they can cooperate provided an olive branch is extended to initiate such work

Ten months ago, such a visit as that of very atypical young Prime Minister Alexis Tsipras of Greece to Turkey would have created high hopes and expectations. His coming to Turkey would have given way to happy speculations of rapprochement, peaceful steps among the two countries, a solution on Cyprus and the smoothening of visa procedures. Today, Tsipras is in Turkey, he has won two elections in eight months, and he will see Prime Minister Ahmet Davutoğlu and President Recep Tayyip Erdoğan, who have recently won repeat elections. The two prime ministers watched a friendly football match between the Turkish and Greek national squads.

Everything today is in place for celebrating a real opening in Turkish-Greek relations, but the visit is going almost unnoticed, both in the national press and the international mass media. No one is expecting any tangible, positive result from these contacts and for a very good reason. With the advent of Tsipras, those expecting a new era in Turkish-Greek relations had to revise all their hopes to the lowest degree in few months.

Obviously, it was very difficult for Tsipras to totally revise the reform and austerity policy imposed on his country by the troika of the International Monetary Fund (IMF), European Bank and European Council. He tried and failed badly. He had created hopes in Greece, but these hopes vanished quickly. The elections he recently won saw participation much below 60 percent, showing the magnitude of Greek voters' disdain for their politicians. Tsipras won because he was the least repellent of the candidates.

His performance concerning a possible opening with Turkey has been even worse than the worst forecasts. On the Turkish side, there were a number of analysts, including myself, vehemently advocating a swift opening from Turkey with Greece. This could have taken the form of goodwill steps, like unilaterally abolishing the military flights over the Aegean. Some analysts even proposed, in the flame of a new shiny Turkish-Greek perspective, to totally dismantle the Aegean Army of the Turkish Armed Forces or to pay an instalment of the Greek debt from Turkey's budget.

I totally agree that it is up to Turkey to make a first gesture, not because it is fair, but because it is the only feasible way. Turkey is a big country and Greece is not. But as the U.S. President Ronald Reagan once said during the nuclear disarmament talks with the Soviets: "It takes two to tango." For the time being, what we have seen from the new Greek administration and its brilliant leader Tsipras is the old and obsolete anti-Turkish rhetoric and stance that has been alive in Greece for the past 50 years.

When Tsipras last visited Moscow, he and Russian President Vladimir Putin held a press conference. Talking about the Greek branch of the Turkish Stream, Putin referred to the Turkish Stream pipeline in Greek territory prompting the reaction from Tsipras: "We have to make it clear ... there will not be any Turkish Stream in the Greek territory but a Greek pipeline." He then totally rejected the idea of joint sea patrols in the Aegean, saying that the Turkish Coast Guard should never enter Greek territorial waters. In this, he has the same intonations and formulas used by one of the most anti-Turkish politicians of Greece, Theodoros Pangalos.

There could be slight optimism for Cyprus, but still it would be much wiser not to expect any tangible result from Tsipras's visit. The football match he watched with Davutoğlu was very dull. The score was 0-0 and the game definitely lacked passion. It was almost a form without substance like the present situation of Turkish-Greek relations.
RELATED TOPICS