History of the refugees 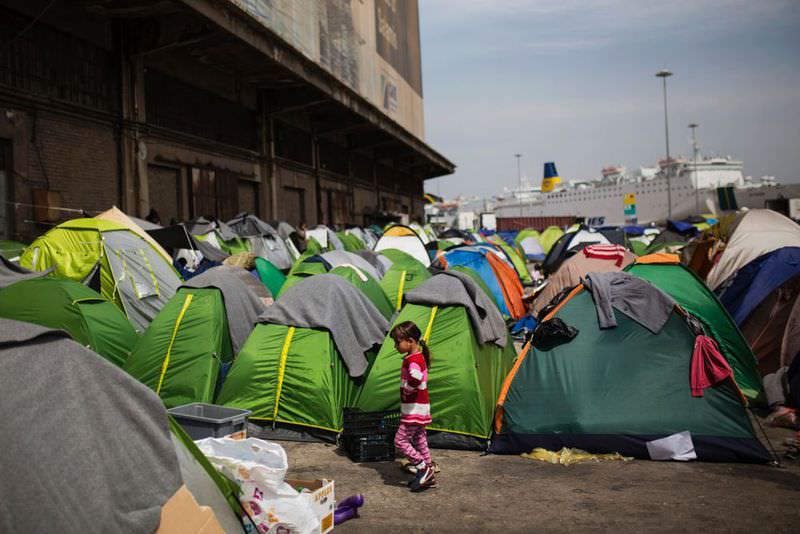 A girl walking among tents outside a passenger terminal used as a shelter for refugees at the Piraeus harbour in Athens.
by Emre Gönen Apr 05, 2016 12:00 am

The story of refugees traversing through different countries in Europe, trying to obtain residence permits and not obtaining them, being harassed by virtually everything, every institution and everybody is not new.

The 20th century has been so full of different examples of the same tragic story that it has created very deep scars in the public subconscious. World War I was supposed to be never repeated, but World War II surpassed every known war in human history in violence, duration, space and intensity.

UNICEF was created in the aftermath of World War II in order to deal with the the immense problem of orphaned children all around Europe. It still functions as a very important international institution today, showing that the problem still exists, albeit in a much lessened form.

Local wars have also created immense waves of migrants, obliged to leave their homes and towns and leave their belongings behind for an uncertain future in an unknown country. It was the case of Pakistanis and Indians after independence, due to the exchange of populations of different faiths between the two countries. The scars it left and the trauma it created has been so intense that an institutional enmity has been erected between India and Pakistan ever since.

French residents of North Africa, today's Algeria, had to leave their land by the hundreds of thousands to go and settle in a France from which they had been separated from for generations. The Pieds-Noirs still long for the country they left, listening to the songs of the most notorious Pied-Noir in France, the great singer Enrico Macias.

The French residents of Algeria found a new home in mainland France. But the military suppletive Harkis of the French army, all native Algerians, Arabs and Kabyle Berbers, had to migrate to France in huge numbers as well, fleeing the new revolutionary Algerian regime. They were parked in transitional camps and barracks and some of them had to stay in these precarious conditions for decades.

It is very difficult for an alien population to fit in an established society or community. Religious appurtenance can play a very important role. There has not been much trouble for France, for instance, to integrate Italian or Polish mine workers who came with their families, en masse in industrialized regions and who stayed for good. People going to the same church can hardly take each other as very different humans or even aliens.

This is one of the major explanations of the absence of conflict between the local Turkish populations - or Kurdish - and the hundreds of thousands of Syrians who had to take refuge in Turkey. There have been no uprisings against the presence of refugees, no xenophobic killings and no outright rejection. As a matter of comparison, the few thousand refugees in very wealthy European towns have created deep-running trouble and fascist manifestations.

But this cannot be seen as enough. The presence of 3 million Syrian refugees in Turkey can be seen as a time bomb if these people are not given any perspective for an acceptable future in which they can live in humane conditions. A young Syrian man, a father of three children working in a textile factory - very likely undeclared job with low wages -recently committed suicide because he was not able to see his wife and children. Such tragedies should alert the authorities and public.

Sending back migrants who illegally traveled to Greece for economic reasons is not a solution, not even a lesser evil or an ersatz solution. The European Union's major aim should be to help Turkey not to stop these refugees at its borders with the EU, but to integrate them into Turkish society. EU member states do have the know-how and the financial assets to devise comprehensive cooperation with Turkey for that endeavor.

It is high time to distance oneself from the rhetoric of whether returning refugees is in compliance with European values or not. Nobody wants these refugees in their countries except Turkey. So it is time to support Turkey, its government, its authorities and its nongovernmental organizations if a helping hand is to be given to Syrians. It is not a question of money, but a question of principles and values.
RELATED TOPICS