The deal for refugees: Whose relief is it for? 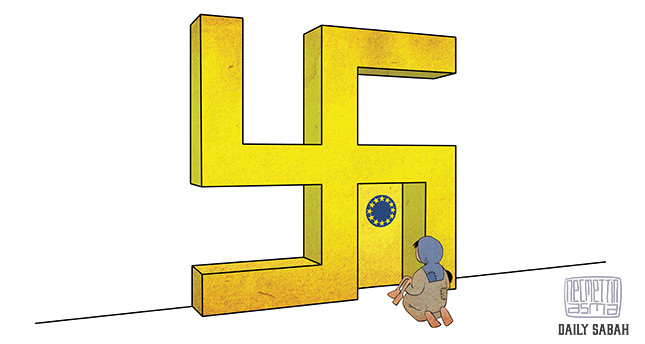 If the EU had made a deal among its member countries to find a solution for the increasing fascism in Europe, maybe their view on Syrian refugees would be something more humane

After the signing of the deal between Turkey and the EU, a couple of boats have been sent from the Greek islands to mainland Turkey full of mainly non-Syrian, economic refugees, amounting to a couple of hundred people. The town of Dikili on Turkey's Aegean coast is the focal point for refugees to be returned to Turkey, where a triage will probably be carried out.

On the positive side, the first deportations were carried out without notable incidents. The flux of refugees to the Greek islands seems to have largely decreased.

Or the negative side, the first deportations from Mytilene and Chios concerned mainly economic refugees from Pakistan and Afghanistan who were already going to be sent back to Turkey before the deal. None of them applied for asylum beforehand and this first operation can hardly be seen as a first test for the deal.

More importantly, the flow of refugees will certainly see a new height with the approach of summer. Turkey's Aegean coastal areas will be full of holiday makers, and it will be incredibly difficult to survey and control the coasts, as anyone with a small, inflatable boat can, with some luck, cross the few kilometers separating the Turkish coast from the Greek islands.

What will happen then will be broadcast on all media outlets -images of poor and desperate people caught and deported or put into transitional refugee camps. It will create a great outcry among the public of developed countries, who will accuse both the EU and Turkey of having opted to sweep the main problems under the rug.

There will certainly also be some refugees who will succeed in reaching EU countries. For the time being, it seems very improbable that more than a few tens of thousands of refugees can be accepted in the EU. However, there will be scores of refugees who will not be accepted and who will try to resist deportation. This will very likely fuel two sentiments. One is already there and visible in xenophobia and fascism. Strangers, especially desperate strangers, are not welcome. The second sentiment will very likely be anti-Turkey. Why, having received billions of euros from the EU, has Turkey remained unwilling or incapable of stopping them in its territory?

Refugees deported back to Turkey will not be eligible to apply for asylum so long as Turkey has ratified international conventions regarding political asylum only for European countries, a relic dating to the period between the two world wars in Europe.

At its present stage, the cooperation between Turkey and the EU is very incomplete. The deal is stuck and, as I wrote before, it was necessary. But if cooperation and the search for a peaceful solution to the problems stemming from Syria stop at this level, it will create more harm than good.

Turkey and its government are doing their best, but obviously Turkey's best is not enough to start a semblance of a solution in Syria. This is a truly global problem for which local solutions and ephemeral deals will not solve. At best, it will bring new arguments for the fascist extreme right in Europe.

Recently, an Association Agreement with Ukraine was rejected by the Netherlands in a popular referendum. This was only an Association Agreement for Ukraine, which is in search of a breath of fresh air in its quest for independence and democracy. An Association Agreement does not lead to full membership in the EU - Turkey is the best example of this. But even this was too much for the mounting fascist sentiments in Europe. A swarm of fascist political leaders, ranging from Geert Wilders to Marine Le Pen presently dictate the external policy of the EU to democratically elected governments and leaders. This is a very alarming development, not only for Syrian refugees, but for all democratic regimes from Great Britain to Turkey.
RELATED TOPICS