How great was my Britain... 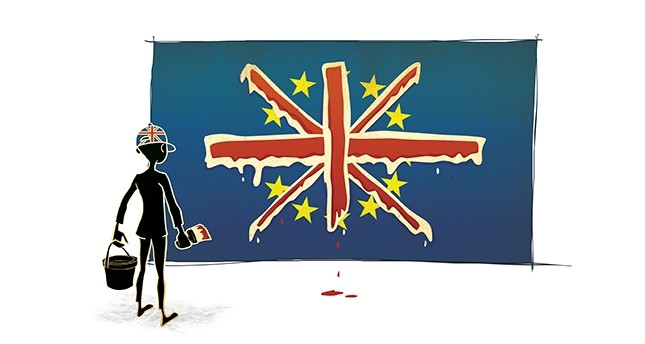 Illustration by Necmettin Asma - twitter.com/necmettinasma
by Emre Gönen Jun 25, 2016 12:00 am

Nobody in the EU wanted to get downgraded to a kind of 'second division membership.' A de facto divide has appeared between states willing to deepen European integration, and those unable or unwilling to go this way

The Brexit is becoming a reality. To be more exact, the whole development is turning into a full-fledged nightmare. How such political blindness has occurred is a point we should discuss further in depth. However, the Pandora's box has been opened and nothing beneficial or positive is coming out of it. Not even hope.

Newly resigned Prime Minister David Cameron has played a very dangerous game and has lost. He has done it twice already, first by allowing the Scottish independence referendum, which he won, then calling for elections, hoping to get a majority in seats, which he also won. In both cases he took risks, which were not negligible, but won. This is the worst thing that can happen to a politician. A whole areopagus of international experts, financial analysts, experimented politicians would, in their large majority, predict your failure, however at the end of the day you win. This is a very common and very dangerous feature to all self-made-men in politics and business: Their overconfidence in their own intuition, especially in times where everyone else tells them the contrary.

Cameron has played his third gamble, and lost very badly. He will probably see the Conservative Party torn apart. He has already declared he would resign from his office as early as this October. Will he be sorely missed? Nothing is less probable. The whole referendum development has been a direct result of the civil strife within the Conservative Party. All the other political parties, except the fascistic U.K. Independence Party, have campaigned in favor of remaining within the EU. They have all lost. David Cameron will most likely be remembered as a political leader who had as much insight as Neville Chamberlain in Munich, back in 1938.

The election results have shown the deep and strong divisions among British society. The London area voted massively to "remain." Scotland did so too, as well as Northern Ireland. All the other provinces have voted to "leave" the EU. Scotland's First Minister Nicola Sturgeon has said that the EU vote "makes clear that the people of Scotland see their future as part of the European Union" after all 32 local authority areas returned majorities for "remain." Northern Ireland's Sinn Fein has declared immediately that preparations for a reunification of both parts of Ireland should be started. In both cases, additional referenda are in sight, both in Scotland and in Ireland (Northern Ireland and the Republic of Ireland most likely).

This is how the "independentist" movements made Great Britain great again, according to their slogan. The whole United Kingdom is being torn apart, the pound is tumbling, and this is just the beginning. London, as the center of financial activities in Europe, will have immense trouble keeping its dominant position vis-à-vis other financial places, such as Frankfurt, Zürich and Paris. In a nutshell isolationism in its glory has won the day. Not only Great Britain, but almost all the other European countries (including Turkey) will bear the cost of such a shift in politics.

British society is not at all used to plebiscites and referendums. In history, such periods of uncertainty and referendum voting have been followed by authoritarian regimes, to say the least. In view of gloating politicians as Nigel Farage, Geert Wilders or Marine Le Pen, there is ample room to be very alarmed.

British small constituency uninominal electoral system places the candidate parliamentarians very close to their voters. Local policies are very important, as well as the individualities of the candidates. All of a sudden, in a two-year span, British voters have had to participate in two different referendums: The one in Scotland covered only Scots, but its outcome was extremely important for all the subjects of Her Majesty. Scots opted to stay in the U.K., but now that the majority of the population wants to leave the U.K., Scots will be tempted to organize a new referendum, this time to leave the U.K. and join the EU as an independent Scotland.

Ireland is another salient issue. After all the terrible years of IRA terror, the peace process was well on its way. It was one of the oldest political problems in Europe (dating back to Cromwell in a sense), and it was being successfully resolved. Sinn Fein perhaps now has other perspectives. It is hardly thinkable that the reunification of the two Irish states can happen in the near future, but in view of all the improbable developments that became reality, we may not be at the end of our surprises.

The possible repercussions of the Brexit are numerous. Regionalism within the EU is a reality and a number of regions will be tempted to follow this first example and try to implement similar procedures. Although the Brexit has been triggered by the central government, the Spanish problems can be adversely affected. Catalonia is trying to get away from a very decentralized Spanish regime, but Spain, through its central government, has warned the Catalans that in the case of an independent Catalonia, Spain would be against the latter's membership in the EU.

The Pandora's Box is now wide open. Turkish-EU relations, already in a stalemate, will undoubtedly be adversely affected by the disaffection of the British. But this is only a very slight damage. The Brexit has shown openly the structural problems of the EU.

Back in the 1980s, EU member states have opted for a deep integration system, dear to Jacques Delors. A monetary and economic union among 12 member states was devised, supplemented by two other dimensions: A Common External and Security Policy and Cooperation in Justice and Home Affairs. The Maastricht Treaty, totally obscure to the common mortal, in fact wanted to stop the enlargement of the EU at 12 member states. The remaining possible candidates would have been placed in a second zone EU that was the European Economic Area. A third and even more remote layer would encompass countries like Turkey to be solidly attached to the Single Market, through flexible instruments like a customs union.

This system never worked, because the Berlin Wall fell down and the bipolar world disappeared. A huge number of Central and Eastern European ex-socialist countries saw the EU as their salvation, after decades of Soviet-type socialism. The EU, reluctant to welcome them at first, changed its attitude after the terrible tragedy in Bosnia Herzegovina. In 1993, the Copenhagen Summit opened the doors of the EU to all European countries.

At that juncture, the Maastricht system was already impossible to implement. The EU leaders had to choose between deepening and enlargement. This choice and relevant restructuring of the system has never been carried out. We have inherited a very large EU with members unwilling or unable to go as deep as it was intended in the Maastricht Treaty.

This dysfunctionality has been at the very center of the problems of today. Nobody in the EU wanted to get downgraded to a kind of "second division membership." A de facto divide has appeared between states willing to deepen European integration, and those unable or unwilling to go this way. It has created a very important discrepancy within the member states. This has also been deepened by the inability of the French-German engine to create enough growth for the last 25 years.

The European Union has been the only consolation and pride of the European countries who committed suicide over two world wars. In that sense it remains a highly praised symbol all over Europe. Perhaps not "all over Europe," because the one country who did not feel guilty or complexed about the Second World War, Great Britain, has decided to move away.
Last Update: Jun 25, 2016 1:16 am
RELATED TOPICS