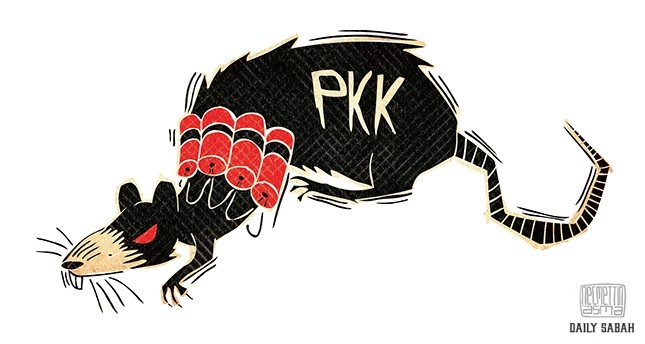 Not only the AK Party but all political parties in Turkey, starting with the secular CHP, should implement policies or at least articulate political stances regarding the Kurdish issue

I was asked to write a detailed opinion about the recent developments in the EU and their probable implications for Turkey on the weekend. I thought I could finish it on Saturday night, after having watched the Beşiktaş soccer team play Bursaspor on a private channel. The game was not very captivating, but my team, Beşiktaş, won it without much trouble, so I was in a good mood when I sat at my work desk.

After some time, a sudden explosion stopped my work. At first I thought it was heavy furniture that somebody from the upper flats had inadvertently dropped. It was followed by another thud that definitely came from a distant spot. I opened the window and saw a number of ambulances passing by, all lights blinking and the sirens blaring. The TV channels started immediately broadcasting about a twin explosion just next to the Beşiktaş football stadium, talking about perhaps 20 people being injured. Over minutes, then hours, the extent of the terrible attack became more visible, although the real number of the victims was never revealed. In the morning, the terrible truth was crystal clear: 32 people killed, 30 of them police officers. Later, the death toll tragically increased to 44, with a number of injured people still in critical condition.

Beşiktaş is probably one of the most sympathetic districts in Istanbul. Being at the center of a junction of main land and sea routes, it encompasses an old and cozy style of urban living, with a very wide and vivid market, with immense traffic, both on land and sea. There are cozy pubs, bars, many shops, with very reasonable prices, diners, fast food eateries, a couple of universities, large parks on the hillside and the Dolmabahçe Palace, the last residence of the sultans.

The football team is identified with the district population, its fan club, the "Çarşı" (the market) is famous worldwide, they still hold the record for highest decibels reached during a chant. Whether you are a supporter of Beşiktaş or not, they are considered to be lovable all over the country. Beşiktaş, with its lifestyle, football team, pubs and markets, represents what Istanbul can best offer.

Attacking the heart of the city, killing 44 people - 30 of them police officers, most of them in their 20s - is the most painful attack anyone can think of. Early on, fingers were pointed at the Kurdistan Freedom Falcons (TAK), a suicide team from the PKK terror organization, known for having already committed a number of extremely criminal terror acts. The targeting of a police bus, which was there in order to secure the departure of a team's supporters, makes the case stronger. They did not wait long to claim responsibility for the double attack in Beşiktaş.

There was deep-rooted and spontaneous outrage on the part of the population. Already spontaneous meetings and manifestations have taken place, with no implication of political parties or forces. On social media, the demands for rightful "revenge" abound. The Peoples' Democratic Party (HDP), mostly seen as the voice of the Kurdish population in Turkey, published a condemnation of the attack very early, but this has been done in a rather "diplomatic" style, which unfortunately created an adverse effect. The three other parties represented in Parliament, the Justice and Development Party (AK Party), the main opposition Republican Peoples' Party (CHP) and the Nationalist Movement Party (MHP) signed a joint condemnation. The HDP did not sign it, further deepening the divide and its perception as an "alien" political force.

Public opinion is white hot, the funerals of the first five police officers have been extremely harrowing, both the interior minister of and the general director of security gave speeches, talking about "punishment" and "revenge." Most of the newspapers have heralded the same motto "We are more united than ever in Turkey."

We are not united alas. The criminals who committed this terrible act have died already, in both explosions, so long as these explosions were suicide bombings. They represent a criminal and despicable radicalism that combines nihilism with puking jingoism. But the population they claim to represent does not want to be represented by these criminals. This is the classic paradox of terrorism: A radical branch has taken the faith of a whole population hostage and the large majority is squeezed between the radicalism, violence and terror on one part, and disdain and misunderstanding on the other part.

The Kurdish insurgency, led by the PKK, started in 1983, in the aftermath of the military coup of 1980. It has never been suppressed since, despite a huge number of militants killed and leaders (not least the historic leader Abdullah Öcalan) captured or killed. I do not remember the number of politicians, prime ministers, ministers of interior who have declared that the "terror will be totally eradicated." Most of them have passed away. The terror still survives and can become extremely dangerous, as we have seen in Beşiktaş.

To date, the AK Party has been the only political force to have (probably) granted cultural rights to Kurds in Turkey. Since the resumption of the conflict in June 2015, the AK Party has also taken a very nationalistic stance. It is supported by the two other opposition parties in that sense, the CHP and the MHP. As the famous Turkish writer and thinker Kemal Tahir once said: "The only reigning ideology in Turkey is nationalism." He is probably right, but we cannot simply ask the Kurdish population of Turkey to abide by Turkish nationalism to live in peace. In doing﻿ so, we will only bring support to the criminal deeds of the PKK and the likes. The PKK does not care about Turkey, about killing people (including its own), about the HDP. We should not and cannot abandon the Kurdish population to the mercy of such merciless terrorist organizations.

Turkey, not just the AK Party but all the political parties, starting with the secular CHP, should implement "policies" or at least articulate political stances regarding the Kurdish issue. Already a large number of Turkish citizens of Kurdish origin have adopted the identity of a "Turkish citizen," fully or partially. The remaining parts, the ones who refuse to accept living under such a regime will not change their opinion if there is increased pressure upon them. This is how terror divides society. The only way out is to denounce the PKK (and the likes, the Democratic Union Party (PYD) or other peripheral organizations) as a terrible criminal organization and allow the Kurds to have freedom of speech, suppressed only for glorifying the use of violence. We have to do it to understand each other better than we do today. Nobody, whether they are from Beşiktaş, Suruç, Diyarbakır or Ankara, living on Turkish soil merits becoming a victim of such a terrible tragedy.
Last Update: Dec 14, 2016 8:10 am
RELATED TOPICS