Terrorism is global, our answer to it is not﻿ 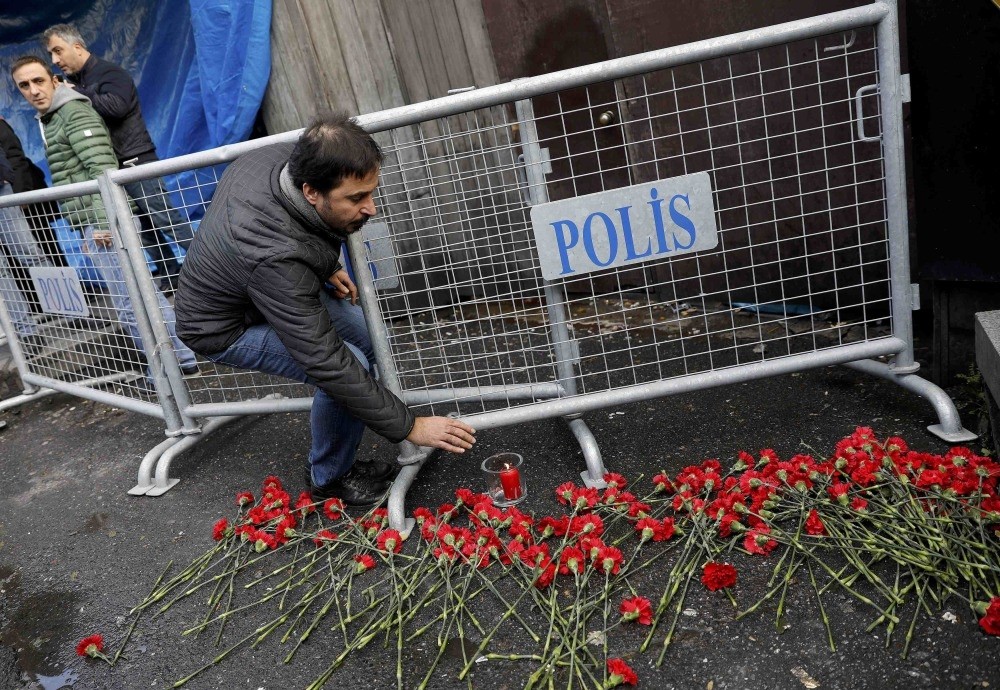 The terrorist attack in the early hours of Jan. 1, claimed by Daesh, killed 39 innocent people. Effectively countering nihilistic terrorist groups is contingent on democratic countries acting in unison.
by Emre Gönen Jan 10, 2017 12:00 am

The new nihilistic terror attacks are not the deeds of a well-organized, well-informed terror mafia, with its tentacles all around the world. The revendications do not matter anymore, the aim is to kill, to destroy, to destabilize and to terrorize

After the terrible and inhumane terror attack during the first hours of the new year in Istanbul, a second attack, almost as deadly, happened in İzmir. The loss of human lives in this second attack was almost minimal, due to the heroism and experience of a traffic police officer, Fethi Sekin. He lost his life when he stopped a vehicle full of explosives before it reached the Tribunal Building, saving the lives of tens of citizens. Two terrorists were killed and a tribunal clerk also perished during the gun fighting.

The second terror attack in Turkey since the beginning of the year seems to have the signature of the PKK. It is their nasty habit to target official buildings and members of the security forces. However, this could have also been the work of Daesh, as long as the cars full of explosives are one of their preferred means to kill dozens of people. There was a very similar attack in Baghdad two days ago when a vehicle full of explosives blew up, killing nearly 30 people in a market.

Something rather unexpected also happened in Jerusalem. A Palestinian truck driver ploughed deliberately through cadets, killing four of them and injuring a dozen more. One injured soldier is in a very critical condition. What is unusual is not an unexpected attack on the part of a Palestinian living in Israel: it seems that Daesh inspired the truck driver to perform his criminal mission. The information has not been fully confirmed yet. Israeli Intelligence is insisting on a Daesh origin in the attack. That would be a first on Israeli soil.

Now, in all cases, in İzmir, in Berlin, in Baghdad and in Jerusalem, the "conventional" explanations do not mean anything. We can always talk about the "Kurdish issue" in Turkey, the "Palestinian problem" in Israel and occupied territories, the "rise of the extreme right" in Germany, the "atomization" of Iraqi statehood, nothing really deciphers how this urban terror has turned into a nihilistic, inhumane and extremely violent eruption of hatred.

The heroic police officer in Turkey, Fethi Sekin, was a Kurdish citizen of the Turkish Republic, a member of security forces, he would also incidentally serve as a Kurdish interpreter for the Izmir tribunal. The cadets killed in Jerusalem were on a relaxing trip, all Israeli young citizens serve in the armed forces, men and women alike. The cadets did not have the presence of mind to use their weapons when the truck drove over them, a security officer in the neighborhood fired first. The people in Berlin were doing their Christmas shopping when a truck drove over them, killing 12 people. The poor Baghdadi civilians were trying to do their daily shopping and return home in one piece, when the car exploded and killed 30 people, injuring twice as much.

What we see as a common denominator in all these actions is the fact that people living their "normal" lives in their daily routines are being targeted. Going to celebrate the new year can be extremely dangerous and deadly, as the attack in Reina has shown... Going to see a football game can be deadly too, as the attack in the aftermath of a Beşiktaş-Bursaspor football game has shown. Going to a promenade can be most hazardous, the cadets of Jerusalem would say. Plain Christmas shopping is a very risky business say the citizens of Berlin... and in Baghdad, going to the grocery store is altogether a life and death matter.

This new nihilistic terror attack are not the deeds of a well-organized, well-informed terror mafia, with its tentacles all around the world. If it were the case, like in James Bond movies, to get rid of them would be a matter of weeks, not even months, for the developed countries intelligence and security services. This is something else. People who are the leftovers of society, for whatever reason, can go totally insane in a matter of months, can relate to al-Qaida or Daesh and can turn themselves in kamikazes and perform their deadly mission anywhere in the world.Already existing terrorist organizations or armed movements seem to follow the extreme example of al-Qaida and Daesh. The revendications do not matter anymore, the aim is to kill, to destroy, to destabilize and to terrorize. Seldom do the terrorists care for their life.

The problem is ill-defined and mostly very badly understood by democratic countries. Governments and decision-makers continue to try to understand, analyze and solve this problem as if it were "conventional" political terror. It is not... It is an insane reaction to global problems, inequalities and tragedies.

A very good idea would be to bring together democratic countries first, to establish much sounder cooperation, instead of expecting everyone to clean up its backyard alone. This is not possible, such gigantic terror requires very important means and collaboration. The sooner it is understood, the better we can resist the terror.
RELATED TOPICS