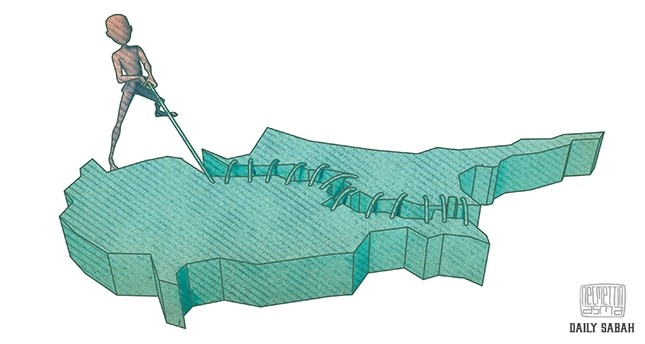 The Cyprus issue is back on the agenda in the difficult negotiation stage, this time with newly elected figures on the island. We will soon see whether the parties are able to reach an expected compromise in the years-long conflict or not

I was 18 when the Turkish Armed Forces (TSK) intervened in Cyprus. My childhood was spent witnessing the suffering of the Turkish Cypriot minority on the island, caused by the attitude of the Greek Cypriot majority. For the last 42 years, I have been hoping, as with most others, for a workable solution to the Cyprus problem.

The independence of the island was decided in London in 1959, by Great Britain, the colonial power, with Turkey and Greece as representatives of the communities on the island. The leaders of the two Cypriot communities were present, but their influence on the outcome of the agreements was not decisive. In such circumstances a constitution was drafted and agreed upon together with two further Treaties of Alliance and Guarantee in Zürich on Feb. 11, 1959.

The Republic of Cyprus was proclaimed in 1960, with a "power-sharing" constitution. This was not at all to the liking of the Greek Cypriot majority, which totaled four fifths of the island's population. Very rapidly, the intercommunal dialogue was broken and the Turkish Cypriot minority was ostracized. The Republic de facto ceased to exist from 1963 and a period of 11 years, between 1963 and 1974, witnessed attempts to ethnically cleanse the island.

Three major military interventions took place in Cyprus starting from 1950. Decolonization was not very easy, as Great Britain remained very unwilling to leave Cyprus, because it constituted a major military base and port in the middle of the Eastern Mediterranean (it was called the "unsinkable aircraft carrier"). As a result, the British sent additional troops to the island to resist the nationalistic uprisings of the Greek Cypriots. They also enrolled a number of Turkish Cypriots into the colonial police forces in order to better divide the society. But Cypriot society was already much divided. Nationalistic vibes enlivened the Greek Cypriots through the EOKA, and not at all the Turkish Cypriots. The latter were more interested in the reforms of the Turkish Republic, which they also implemented in their respective communities though nothing forced them to do so.

The colonial resistance on the part of the British proved unsuccessful, but it did not prevent a second military intervention. The "Cypriot nationalism" of the Greek community was mainly based on the idea of "Enosis," reunification with mainland Greece. So Greece was sought to intervene militarily, but it lacked the ability to do so in a conventional military way. Instead, around 20,000 Greek troops

were sent to the island in plain clothes, with no weapons and with tourist passports. The attempt was so gross that Greece had to withdraw its troops before they became operational, after an injunction from the United Nations.

The third military operation was the Turkish intervention in 1974. The Greek military junta, in power since 1967, had nothing to offer its population than a victory in Cyprus, to attach the island to the mainland. They tried to foment a coup d'état to get rid of Archbishop Makarios and to place a puppet government at the head of the island and complete once and for all the "ethnic cleansing" of the Turkish Cypriot minority. The TSK (which was not really structured to carry out such a big overseas operation) intervened on the island. The first military operation had a mitigated success with a bridgehead around Kyrenia occupied by the TSK.

What happened next was quite unexpected. The military junta in Greece wanted to react by waging war against Turkey, but they were stopped by U.S. pressure and the asymmetrical balance of forces between the two armies. Consequently, in the aftermath of the first intervention, the exiled former premier Konstantin Karamanlis, a political genius, was called back. The opportunity to establish peace in Cyprus was missed. Greece and the Greek Cypriot side remained quite cautious regarding a workable solution, whereas the Turkish side was pushing toward a swift and advantageous outcome. The Geneva talks came to a halt after a few weeks and the TSK started a second operation that took just three days and established control over more than a third of the island.

Since then the Cyprus issue has remained a long-standing "frozen conflict," with both sides living totally cut off from each other. The Cypriot Republic, recognized by the U.N., has lived in the myth that everything was going smoothly when the Barbarians attacked the island in 1974. As a matter of fact, without the division of the island, the Greek Cypriot community would not have had to endure any external pressure concerning the awful and criminal governance that was implemented between 1963 and 1974. For the Turkish Cypriot community, history started with the Turkish intervention that saved them from a possible cleansing. From such divergent and opposing viewpoints, the intercommunity talks under different Secretary Generals of the U.N. (the enumeration is incredible, U-Thant, Kurt Waldheim, Javier Perez de Cuellar, Butros Butros-Ghali, Kofi Annan, Ban Ki-moon and Antonio Guterres) has not produced any lasting positive results.

The only exception to this is the "Annan Plan," where the two parties came almost to the completion of a solution, but the Greek side rejected the plan with an overwhelming majority, whereas the Turkish side accepted the same plan with a sizable majority. As a gift, the Greek Cypriot side received acceptance into the EU as a full-member, whereas the Turkish side was relegated to the position of a lackey, dependent on the goodwill of Greek Cyprus for having some openings to commerce with the EU. With their acceptance into the EU, Greek Cyprus blocked all the hesitant overtures of the EU toward Turkish Cyprus. Former Commissioner Günter Verheugen declared a few years later that he had been totally duped by the Greek Cypriots. Meanwhile, the "particular" relations of Greek Cyprus and Russia became very pronounced after the membership. When the euro crisis struck Cyprus, the first trip by the Cypriot President Christofias was to Moscow rather than Brussels.

Very recently, with a boost from two newly elected presidents, Nicos Anastasides and Mustafa Akıncı, the intercommunal talks gained momentum. Greece as well as Turkey have both supported the negotiations and for the first time since the Annan Plan. This was without counting the power of the nationalistic fi

ber of Nikos Kotzias, the Greek foreign minister, who has rendered impossible already very delicate negotiations thanks to his stance. "Kotzias's behavior toward Guterres so irritated the new U.N. chief that he has so far refused to sit in the same room as the Greek foreign minister. This means that if and when the conference on Cyprus convenes again, it will have to be at the highest level of representation," it said in the Greek Cypriot CyprusMail, Cyprus's leading English-language news outlet.

We will soon see whether Turkey will make an additional effort to put back on the rails a very difficult negotiation stage, sabotaged this time by a Greek foreign minister, who probably wants to become a second Theodoros Pangalos.
Last Update: Mar 21, 2017 2:21 pm
RELATED TOPICS