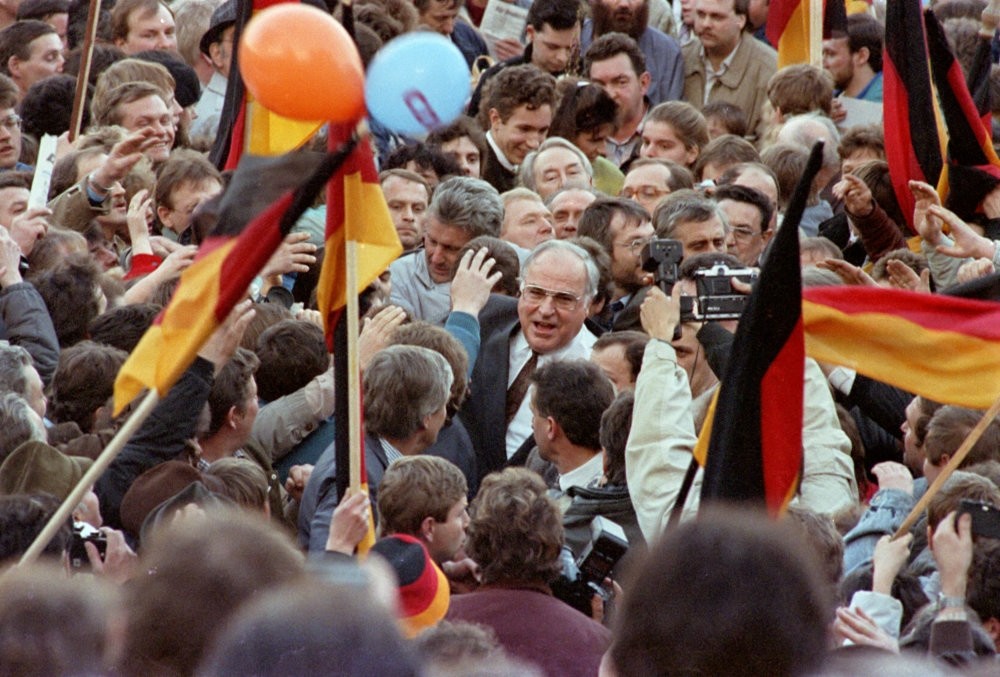 West German Chancellor Helmut Kohl moves through a crowd of supporters Feb. 20, 1990, during his first appearance as part of the East German election campaign in Erfurt, East Germany.
by Emre Gönen Jun 20, 2017 12:00 am

Having played a big role in the fall of the Berlin Wall, praised by some as a great European and described as a distant and cold father by his own sons, Helmut Kohl, an underestimated, conservative German politician, left his mark on world history

Last week, one of the most prominent recent politicians of Germany passed away. Hermut Kohl will certainly be remembered for his deeds, not least for having been the architect of German reunification after the fall of the Berlin Wall. He has also been praised in numerous articles as a "great European," his second great deed probably being the preparation and implementation of the single European currency, the euro.

Der Spiegel announced his death by calling Kohl "the Dark Giant." It is a fact that the end of his career was characterized by improper deals within the CDU, his party and his image remained tarnished because of dubious business agreements. He had a stroke few years ago, preventing him from speaking and walking, after which he passed away in his hometown, Ludwigshaffen, like a perfect conservative German gentleman. He would have preferred undoubtedly a better "end of career," especially avoiding the strife between his two sons and his second wife. The family will participate in the funeral separately, rendering public a very deep divide and mistrust. Both his sons made public their sentiments about Helmut Kohl, as a distant and cold father who preferred his career to the health of his first wife, their mother.

We will certainly see better surveys and memoirs about Kohl in the coming years and decades. One thing is for sure, he is a pure product of post-war German politicians: Efficient, sometimes blunt and stubborn, nonetheless always keeping a low profile. Konrad Adenauer and Angela Merkel fall nicely within that category. Ludwig Erhard and Willy Brandt are the geniuses, with much shorter terms in power. What characterizes German politics after World War II is the longevity of conservative leaders. Adenauer remained in power for 14 years without interruption, Kohl 16 years, and Angela Merkel will probably establish a new record of longevity if she wins the elections yet again later this year.

There is a latent continuity in German conservative politics. They sound dull, they seem to be low profile but the underlying understanding is strongly embedded in every move they make. Helmut Kohl said it once in a prophetic sentence: "Germany has always been successful when it helped others. We shall continue in this way."

This continuity is visible in all three leaders, they are definitely very nationalistically German, but very European at the same time. The identity of being German without being European is strongly rejected. It is worth remembering that under Helmut Kohl, the Christian Democratic Union congress in 1992 has prepared and accepted a motion for a single constitution in a federal Europe. By the end of 1994, Germany proposed to France and the Benelux a federal hard core. Germany under Kohl wanted to reform EU institutions, notably by giving the parliament a role at the level of the Council of Ministers. Kohl wanted to totally revamp NATO, establishing an alliance where the U.S. and the EU would be on equal footing. This deepgoing transformation proposal of the Franco-German alliance fell on deaf ears, because back then, France had cold feet.

According to Heinz Gollwitzer, Germany was at this time proposing to the world, for a first time, a universal idea. However, the implementation of such an idea required a much deeper and richer diplomatic tradition that Germany did not have. Their clumsy attempt to recognize the independence of Slovenia and Croatia precipitated the civil war in Yugoslavia and the atrocities that followed. The EU remained totally powerless against the bloodshed in Yugoslavia and the idea of establishing a more federal, better integrated European hard core was been taken out of the agenda.

Helmut Kohl despised the idea of having Turkey as a full member of the EU one day. This had a justification in his view of a very integrated, very federal Europe. He did not see at all how Turkey, a distant, big and relatively less developed country could gain a place within his prospective Europe. Like almost all the other German conservatives, he thought that one day, Turkish guest workers should go back home. He also resented a very badly organized official trip to Ankara, where he was hosted in a mansion with a bed too small for his immense body. Besides the anecdotal aspects, Germany under Kohl did not want Turkey staying away from Europe, but never thought it should become part of the EU. Today's very ambiguous situation stems from Germany's essential dichotomy: How to keep Turkey close to Europe without membership? Kohl did not have the opportunity to reform the EU. Will Merkel have enough time and perseverance to do so? Will Macron live up to the expectations he has created for European integration? Turkey's fate will certainly depend on these issues in the coming years.