France should reconcile Turkey and Germany 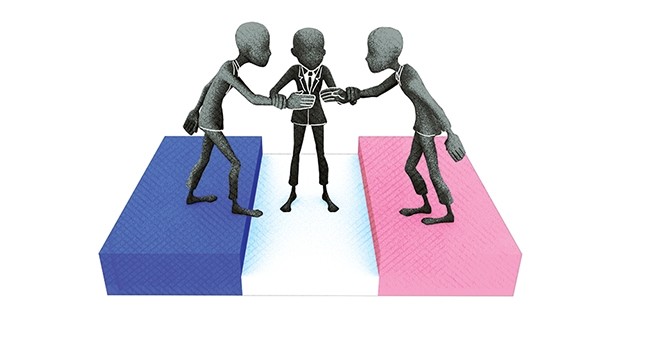 France, under the leadership of new President Macron, must play a mediator role in the crisis between Turkey and Germany

European integration has been based upon the dynamism of the French-German partnership... This is a sentence you are likely to hear and to read maybe a million times, if you ever have to study the EU. It is also true that without real, deep co-operation between France and Germany, today's European Union would never have existed. Or, let us put it the other way around: If France and Germany were not partners, it would have created a nefarious competition that would have only given way to problems. It is obviously too naive to think that the EU can be downgraded just to the cooperation of the German and French economies and societies; however, this partnership remains the bedrock. To be perfectly clear, let me rephrase my essential thought: No country can have good relations with the EU as long as both France and Germany have bad relations with that country. Unfortunately, to a degree, this is the situation in which Turkey happens to be: Our relations with Germany are going from bad to worse, and with France they remain at best distant.

President Recep Tayyip Erdoğan's visit to the G20 summit has created the umpteenth conflict with Germany, which does not really want Erdoğan to hold a meeting with thousands of people supporting him on German soil. This problem is not new, but it has gained increasing seriousness over the years. The last problem in Germany gave way to the horrendous events that took place in the Netherlands with an incredible diplomatic scandal that involved the only female member of the Turkish government, Fatma Betül Sayan Kaya, who was declared persona non grata and was accompanied, almost military style, to the frontier. Causing crises of such magnitude are seldom a good idea in foreign relations. It mostly freezes relations at the top level and intermediate level contacts very rapidly become devoid of substance. It may also give way to other incidents, whose effect is magnified under the stress that exists at the highest level.

The recent incident at the G20 summit in Germany is a blatant example of how things can get out of hand very easily when diatribes mutually take place at the highest level. A placard, depicting the Turkish president as a dictator and asking for his "disappearance" in exchange for a new car has been placed in front of the German Chancellery. The fact that the "dictators" in question also include the Russian president and the Saudi king does not alter the fact that this remains an unacceptable insulting and threatening protest against the highest representative of a NATO country, a candidate country for EU membership.

Turkish democracy is having immense difficulties normalizing after the coup attempt that took place a year ago. Obviously, there have been severe breaches of democratic functioning in Turkey, and the police and the judiciary are in a very strained situation due to the dismantling of the Gülenist Terror Group (FETÖ) infiltration and its very nefarious effects. The Turkish Armed Forces (TSK) has also been purged, at a time when all around Turkey there are either wars or warlike situations. In these difficult periods, it is understandable that EU countries would criticize the shortcomings of democratic functioning, but what is happening has turned into a vengeance operation. Representatives of FETÖ are waiting for political asylum in Germany, and an important contingent of the German Army has left the İncirlik Air Base for Jordan because of political misunderstandings. It was very unfortunate that the Third Reich was referred to when criticizing the German government's decisions to not allow Turkish politicians to hold meetings on German soil. However, the answer to that cannot be allowing blatant death threats to the Turkish president in public places. The Foreign Ministry has issued a diplomatic note, nearing an ultimatum to German authorities to prevent such incidents. None of these developments bode well for the coming weeks and months. Obviously, Turkey and Germany, through conventional diplomatic channels and bilateral talks will not be able to overcome this situation easily.

There are two issues to take into consideration now. First, criticizing Turkey the way Germany (and to some extent the Netherlands do) is very counter-productive. This attitude will only ignite xenophobic sentiment and nationalistic feelings among a very large part of the Turkish public. Preventing Turkish politicians from holding popular meetings in Germany and in the Netherlands has been instrumentalized by the Turkish political elite. The result of the recent referendum was definitely influenced by developments in these two countries. To say that the "results of the referendum could be reversed if Germany was more accommodating with Turkey" is pure speculation. However, there is a visible effect; the stance taken by the German and Dutch governments helped to consolidate President Erdoğan's support among the population and voters. Therefore, opposing the Turkish government so bluntly is not a good strategy if one really wants to help Turkish democracy fare better.

WHAT DID FRANCE DO?

So what would be a good strategy in the short term? This is the second issue: We shall look at what France has done in the same period when Germany and the Netherlands opposed a veto to Turkish politicians. Foreign Affairs Minister Mevlüt Çavuşoğlu was allowed to hold a meeting with the Turkish diaspora living in France (which has the second largest Turkish diaspora in Europe after Germany). The French government declared that so long as French laws and regulations were not breached, they did not see any problem organizing meetings in France. The issue was solved before it even became a real problem. Turkey's relations with France were at an abysmal low during Nicolas Sarkozy's presidency. Nobody understood why Sarkozy had a vendetta against Turkey, but the damage was done. Since, the Hollande presidency has been a long, low-profile but steady process of mending the misunderstanding. Macron's presidency will no doubt be on the same wavelength and try to better French relations with Turkey. It would then be a very good idea for the Turkish government to approach France and ask for informal mediation between itself and Germany. Perhaps, this would become a sustainable system that brings the three countries together informally but periodically. Otherwise, through diatribes at the highest level and through totally frozen accession talk instruments, our relations with Germany will become even sourer; that is a risk we should not take.