Facing the truth of a populist, anti-immigrant government in Austria 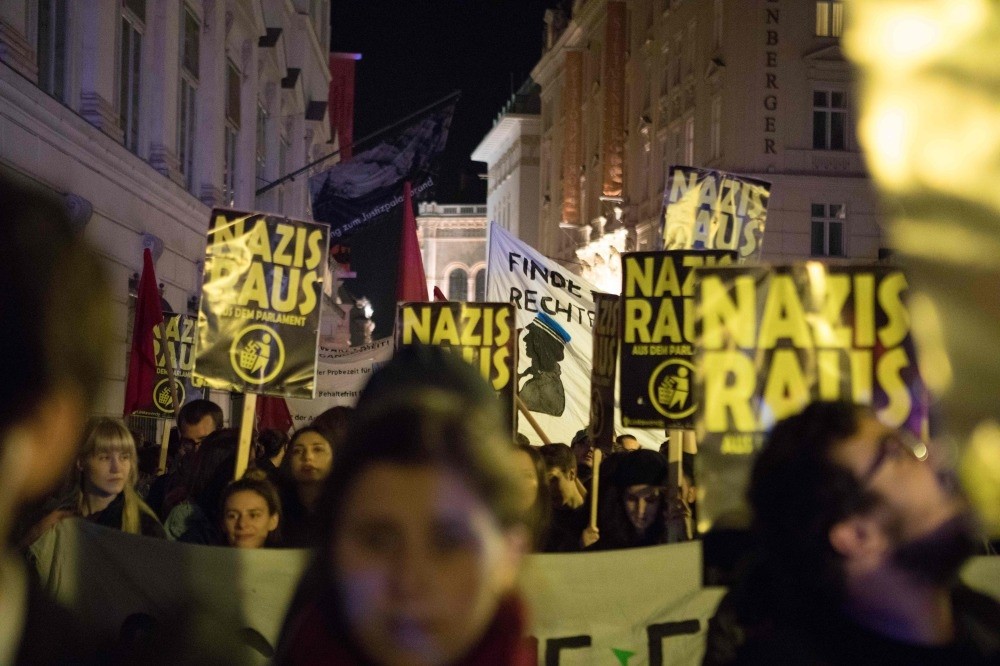 Demonstrators protest against the far-right Freedom Party of Austria following the elections results, Vienna, Oct. 15.
by Emre Gönen Oct 18, 2017 12:00 am

It is unfortunate to see that the populist, anti-immigrant Austrian leaders have found the chance to form a government in the country

Austria is a symbolic country, for a number of reasons. First of all, after World War II, Austrian governments had to put up a steady, yet very difficult struggle to be normalized. The invasion of the Red Army could have only been lifted back in 1956, in exchange for Austrian neutrality. The country has been given a much more decentralized constitution, very much like Germany, because Austria was seen as a "potential danger" by the Allied countries after World War II. Depriving both Germany and Austria from strong central governments was sought and implemented, which did not give the expected results at all. Both countries do have fine working federal systems, coupled with strong centralized governance.

Austrian nationalism was mostly created after World War I, very much like the late Turkish nationalism. Both countries shared a similar fate, after the dislocation of their very old and very traditional multi-ethnic empires. The Turkish independence war mostly repelled the Versailles system that would have given Turks a very tiny territory. Austria, in the aftermath of World War I, was not able to wage such a struggle due to the geographical closeness of victorious European countries, and inherited a tiny territory with a giant capital, Vienna.

Unfairness was the key word regarding the "peace" agreements signed in 1919, which by the way took humanity steadily toward World War II. What is interesting to consider is that Austrian nationalism was "anti-Nazi" during the Dollfuss period, refusing to be included within the Anschluss. Engelbert Dollfuss was assassinated by the Nazis and the road toward annexing Austria was wide open for the Third Reich.

This peculiar history of Austria is largely forgotten most of the time; it is always difficult to understand the reactions of the populations by not taking into consideration their recent history.

For the Austrians, the "extreme right" having been fundamentally anti-Nazi, does not have a bad remembrance for the Austrians as the Nazi past does in Germany. Nazism was imposed upon the Austrians by the German invasion, led triumphantly by Adolf Hitler. It is a fact that the referendum legalizing the Anschluss, the annexation of Austria, was accepted with an overwhelming majority back in 1938. However, the referenda held in dire situations would give surprising results, usually, as the constitutional referendum in Turkey after the coup d'état of 1980, which was accepted by 93 percent majority of the voters.

Having said that, the results of the Austrian elections are not good news for anyone but right–wing voters. The very young new leader of the Austria's People's Party (OVP), Sebastian Kurtz, has succeeded to revamp his party (which was in shambles a mere year ago) and win the elections with slightly over 30 percent of the votes. Second place is ex aequo, between the Social Democrats (SPO) and the extreme-right Freedom Party (FPÖ), with slightly over 26 percent. Other formations do share a much smaller number of votes, and the Greens (whose historic leader Alexander Van der Bellen was elected the president of the republic early this year), are likely stay out of the parliament, having failed to reach the threshold of 4 percent.

The coalition government to come is very likely an association between the OVP and the dreaded FPÖ. It is hard to see how the two big traditional parties, the SPO and the OVP, could find common ground for immigration policy.

Sebastian Kurtz has chosen a very xenophobic attitude vis-à-vis the forced migrants. That may be advantageous for domestic politics and win votes. But otherwise, we do not live in 1919 and the stance to be taken should definitely not be that of the different governments between the two wars. Austrians should know this better than anybody.

We are far from the times when Bruno Kreisky was a popular chancellor, but forgetting the "human" factor in international relations is the biggest mistake any government can make. The migrants are "humans" and they are to be treated with the "dignity" they deserve. The great pacifist and anti-Nazi writer Erich Maria Remarque, in one of his most beautiful novels "The Enemy", tells, from Lieut. Ludwig Breyer's mouth, that the most striking thing he saw during World War I was not the terrible battle of the Somme. The big surprise was when he saw the French prisoners, "the enemy," and discovered that they were just human beings.

This is a thought to meditate on, while expecting a populist and very anti-immigration coalition government in Austria. "History teaches us that men and nations behave wisely once they have exhausted all other alternatives" (Abba Eban). The saying is deeply wise and pertinent, but so unfortunate, alas.