Austria, your empire disappeared long ago 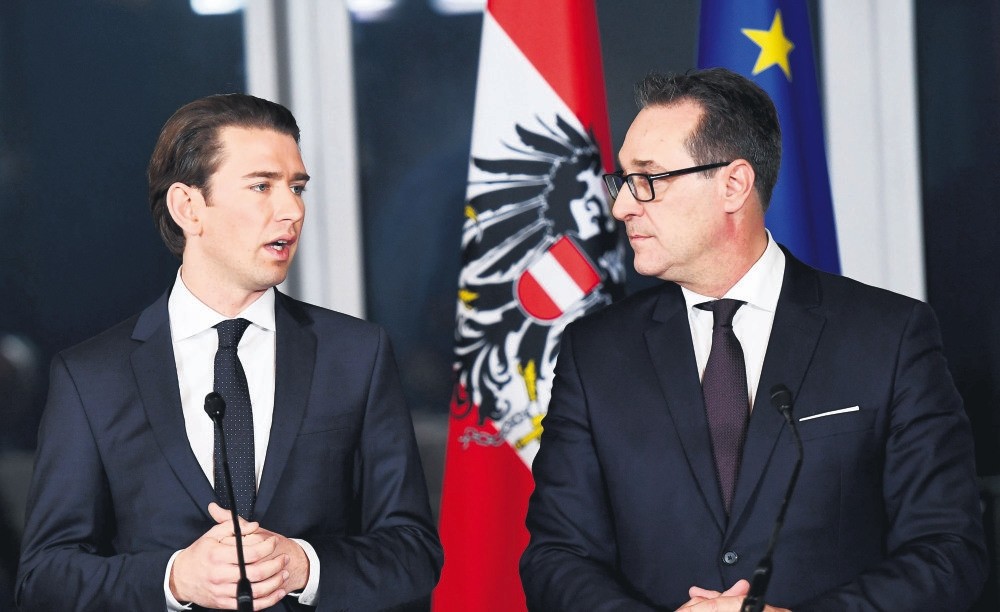 Austrian foreign minister and the leader of the Austrian Peoples Party Sebastian Kurz (L) and the head of the right-wing Austrian Freedom Party Heinz-Christian Strache attend a news conference at Kahlenberg hill in Vienna, Austria, Dec. 16.
by Emre Gönen Dec 20, 2017 12:00 am

And ours too, the Ottoman Empire, disappeared in a terrible way. The Austro-Hungarian Empire was torn to pieces by the Treaty of Versailles that ended World War I. The partitioning of the Austro-Hungarian Empire was carried out in the most unfair and revanchist way possible. German-speaking populations of the empire were scattered among newly created states. The situation of Austria, reduced only to Vienna, Salzburg, Graz, Linz and environs, was dreadful. Vienna, a very old, imperial capital, populated with imperial civil servants and immense administration buildings and palaces, was left bloodless. Generations of civil servants were left without jobs as people died of hunger and poverty among the shambles the bygone empire.

Austrian identity was forged through the ultra-nationalistic political movement of Engelbert Dollfuss, but ultimately it was totally swallowed by Nazi ideology, whose führer was Austrian himself. It did not have the strength or the numbers to forge a viable alternative to the reunion of all German peoples – the Anschluss took care of what was left of Austrian identity.

The aftermath of the World War II was not really a salvation for Austria, whose invasion by the Red Army ended only 11 years after the end of the war. In exchange, a policy of neutrality was imposed on Austria, together with a much-decentralized administrative system as in Germany, to avoid the formation of strong central governance.

Over time, Austria got rid of the neutrality straightjacket with the disappearance of the Soviet Union and it joined the EU. Beforehand, under the wise leadership of Bruno Kreisky, it was an example of progressive external policy to other European countries.

The political scenery unfortunately totally changed over the years, especially with the advent of an extreme right under the leadership of Jörg Heider, who died in a car accident. Since then, the far-right Freedom Party of Austria (FPÖ) has become a political force of significance. Recently, elections saw the FPÖ become the third- largest political force, almost at the same level as the historic Social Democratic Party (SPD). They are now in the government led by Sebastian Kurz, a specimen of the young politicians with different ideological backgrounds who are skyrocketing in a number of other European countries. Their common denominator is to get rid of taboos in domestic and external relations. In France and Italy, and to some degree in Greece, these new leaderships gave interesting and positive results. But not in Austria.

The Austrian right and the extreme right found their scapegoat long ago in Turks. The very old, medieval rivalry between the Holy Roman Empire and the Ottoman Empire has been brought back. The coalition negotiations between Kurz and Christian Strache took place at Kahlenberg Hill, the place where in 1683 the last battle that ousted the Ottoman army from Vienna took place.

One of the first declarations of the new government was to suspend accession negotiations between Turkey and the EU. The response from Ankara came, blunt and piercing. There is no explanation for the declaration from the Austrian government to freeze the already frozen and moribund negotiations, reviving very old nationalism. This is very bad news for everyone in Europe. For the record, the FPÖ has received three key ministries, the Home Office, the Foreign Office and National Defense.

I had the opportunity to write about a common wound for both the Austro-Hungarian and Ottoman Empires – the Treaty of Versailles. I wrote a paragraph a few weeks ago that I would like to present here. The "Republic [of Turkey] owes its existence to the genius and political wisdom of Mustafa Kemal Atatürk, his Ottoman military and civilian colleagues' ability to forge a nation-state out of the remnants of a dead empire. They achieved this by breaking the nasty rules of the Versailles system, which was meant to implement the nefarious Sèvres Treaty. This was another miraculous and wise achievement. The administrative and military traditions of the old empire served its last descendants very well in coping with modernity."

It is obvious that the opportunity was lost for Austria and for Germany to break away from the Versailles system. Turkey managed to do so, even if the Lausanne Treaty created an institutional rivalry between Turkey and Greece. However, this was not the fault of the Turkish liberation movement vis-à-vis the infamous Treaty of Versailles. And it has nothing to do with the medieval rivalry between Emperor Karl V and Sultan Süleyman the Magnificent. Empires have gone, former imperial forces, in the knowledge that their empires will never come back, established the EU. Reviving old imperial wounds and dreams is a very bad idea for Austria and the whole of the EU.