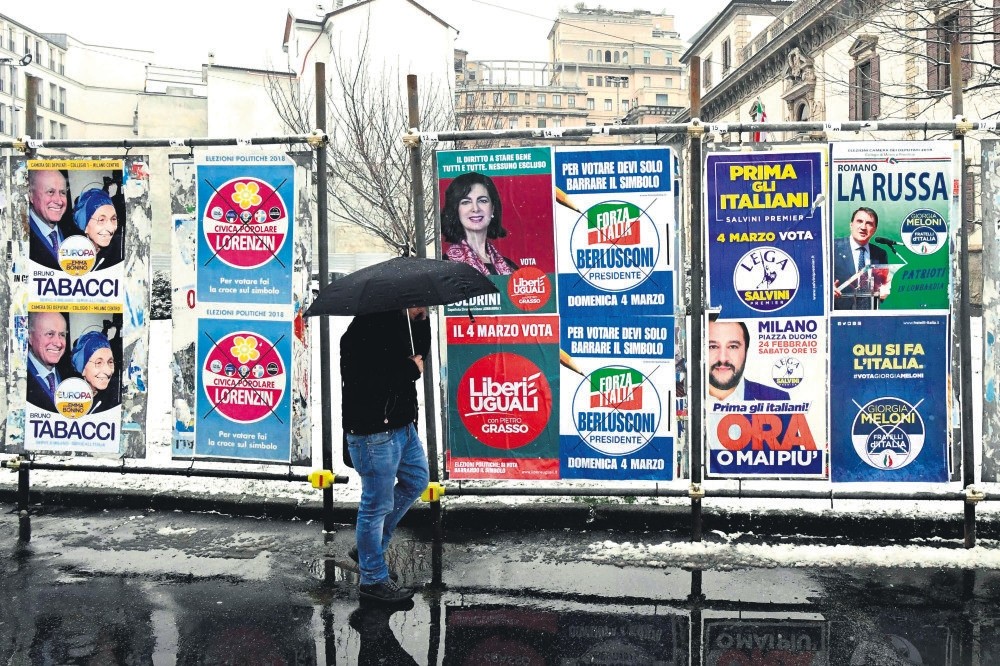 A pedestrian passes in front of election posters prior to the Italian elections, Milan, March 1.
by Emre Gönen Mar 07, 2018 12:00 am

Italian parliament and senate elections took place during the weekend and the results are beyond the worst nightmares of EU leaders. The populist Five Star Movement, led by TV showman, blogger and comedian Beppe Grillo, obtained more than 30 percent of the vote, creating immense surprise. He is not the only showman on the Italian political spectrum, the North League of Matteo Salvini got a very robust 17 percent, and to add injury to insult, Forza Italia, Silvio Berlusconi's party, was resurrected with 14 percent. The ruling Democratic Party saw a historic rebuff from the electorate, and the intricate and complex Italian electoral system delivered a hung parliament and split senate. The results are as follows:

There are overwhelming majorities for populist parties in both chambers. The North League, which originally was created to uphold the independence of industrialized and wealthy northern Italy – the famous Padania – has gradually turned into a sovereigntist and anti-European movement. Nobody exactly knows what Grillo and his Five Star Movement want – loose anti-immigration and anti-EU rhetoric has been used as the platform of the movement together with promises to fight against corrupt and ineffective Italian institutions. It is nothing very new on the part of a populist movement, except for the immense support it found from the electorate.

What is more alarming is the regional divide of the electorate, southern Italy, or Mezzogiorno, voted en force for the Five Star Movement whereas the Democratic Party still soldiered on in the northern provinces. One could say that Italy has encountered many such difficult elections in the past with hung parliaments and each time they have managed to deliver a government. That was the Italian miracle. This time the results do not give much hope for a resilient and cohesive government or governance.

The trouble is that EU countries have mostly left Italian governments alone to deal with illegal migration from North Africa, especially through the island of Lampedusa. Meeting after meeting, EU leaders have been incapable of showing real solidarity, everyone turning a blind eye to Italy's problems. For its part, Italy has found a solution by not so severely controlling the migrant influx and letting them travel illegally within the EU.

However, the real problem is the foreign debt the country has amassed, around 132 percent of its gross domestic product (GDP), more than twice the threshold foreseen in the pertinent Maastricht criterion. As an absolute figure, this foreign debt totals 2.300 billion euros and nobody in the eurozone can afford to see the Italian economy collapse. Nobody, however, including Germany, is capable of managing a full-scale debt crisis in Italy, because the Italian economy is not the Greek economy. The recent elections results have put both French President Emmanuel Macron and German Chancellor Angela Merkel, who is poised to lead the government for a fourth time, in a very dire situation.

This situation is the very logical outcome of the EU's absence of policy concerning migration, the Middle East and a very badly managed enlargement policy. By trying to both enlarge and deepen, the EU is on the verge of losing at both of these objectives. As we have seen many times in the past, the EU delivers best when it is under duress, but this time the whole situation is quite serious.