The European Union is still the best idea 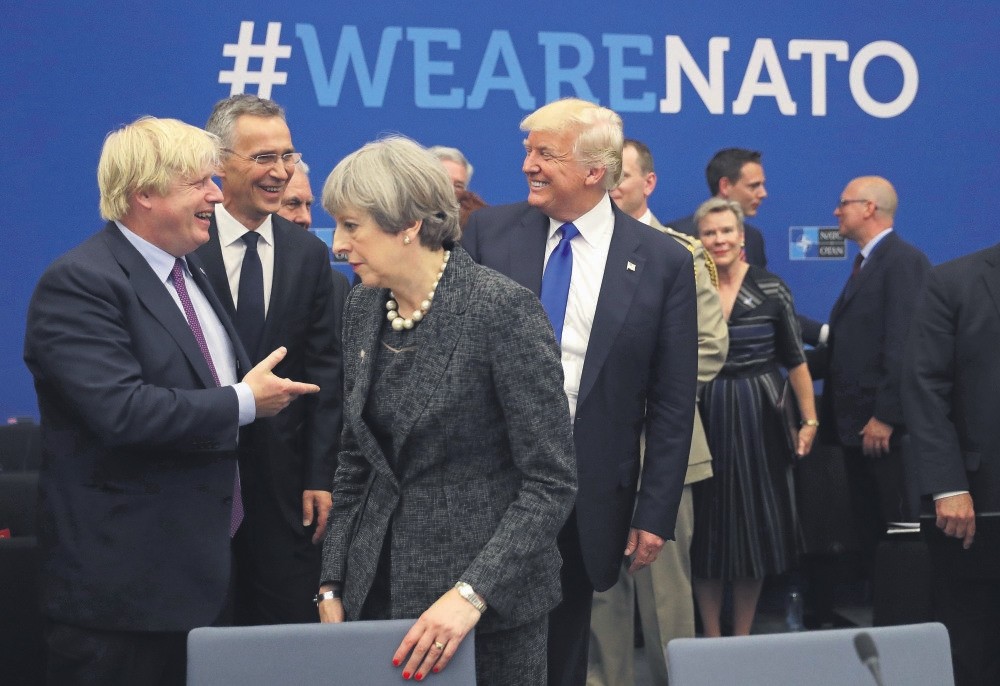 U.S. President Donald Trump jokes with British Foreign Minister Boris Johnson as British Prime Minister Theresa May walks past during a meeting at NATO headquarters during a NATO summit of heads of state and government in Brussels, May 25, 2017.
by Emre Gönen
Jul 10, 2018 12:00 am

Despite the threat posed by the extreme-right movements in most of its member states, the European Union remains the only viable system to resist unexpected events in the international domain

When World War I was over, U.S. President Woodrow Wilson spent nearly a year in Paris in order to establish a new world order, which would show a definite departure from colonialism and hegemonic policies on the part of European powers. He also wanted peace without victors, without rancor. The French and British governments, represented by the old victorious Prime Minister Georges Clemenceau (Le Tigre) and Prime Minister David Lloyd George, sabotaged his achievements.

The war ended with the worst peace treaty possible, imposed upon by the European colonial Empires. The Versailles Treaty (or the system), combined with the terrible 1929 crisis have gradually and inexorably created the conditions for the second terrible conflict, World War II.

Woodrow Wilson's failure created an immense reaction in the U.S. Congress, motivated by isolationism. World War II owes much to the unpreparedness of both the U.S. and U.K. for a sustainable war effort.

President Franklin Delano Roosevelt, having learned a lot from Wilson's failure in 1919, took stringent measures during World War II, in order to finally end vestiges of colonialism and bilateralism. The new world order, established by Roosevelt, has been carefully put in place between 1944 and 1947. The United Nations, the Bretton-Woods system that saw the inauguration of the IMF, the World Bank and the General Agreement On Tariffs And Trade (GATT) had been established through a master plan.

The idea of multilateralism and transparency was a good one, so long as the Socialist camp, led by the USSR that opted for opacity, centralized and planned economy and a single party rule, proved a total failure.

The U.N. system, established by the Roosevelt administration, put in place "five sheriffs" to ensure the well-functioning of the new world order and to avoid a generalized conflict. Besides the U.S., four victorious nations of the World War II were made permanent members of the Security Council, with a right to veto.The permanent members were the unavoidable USSR, the U.K., France, thanks to the de Gaulle national liberation movement, and the Chiang Kai-shek's Republic of China. We know now that this permanent membership with veto rights has definitely sabotaged most of the actions undertaken by the U.N. Still, the U.N. fulfilled the main target it was assigned, namely avoiding a general conflict.

Most importantly, for making this new world order work, the presupposition was that the U.S. would always remain a staunch democracy. Always available to help other democracies around the world. The military structure put in place through NATO and other regional treaties made the U.S. the "gendarme" of the world. In exchange for the security umbrella provided by the U.S., all allied countries did align most of their external policy to that of the U.S.

Main principles of the U.S. system, multilateralism, liberalization of world trade and self-determination have been mostly respected, especially under Democrat administrations. Being the "gendarme of the free world" created some important hegemonic traditions, obviously, but the idea was always that the U.S. was the "good guys," relatively speaking.Now that we have in place the Trump administration, all the main principles of Roosevelt's world order are being abandoned shamelessly. What was unthinkable has become a reality, the U.S. government is not dependable anymore, and we do not know what kind of tragedy it can cause.

In these sad times, despite all its shortcomings, despite the threat posed by the extreme-right movements in most of its member states, the European Union remains the only viable system to resist the unexpected events in the international domain. Whether the EU will be up to its task is another debate.