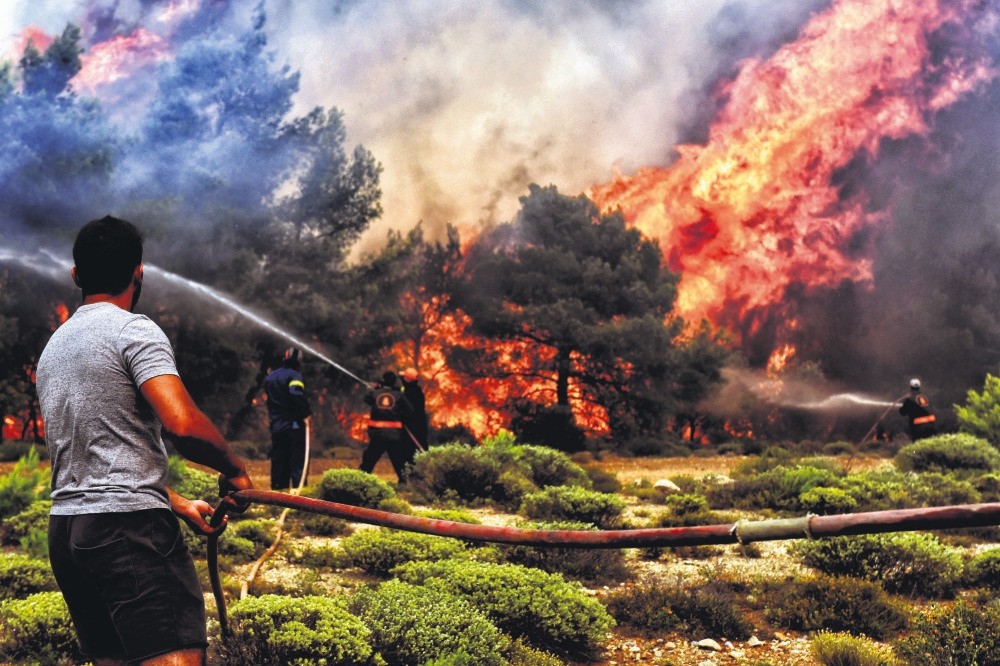 Firefighters and volunteers try to extinguish a wildfire raging in Verori, southern Greece, July 24.
by Emre Gönen Jul 26, 2018 12:00 am

It's a bad idea for Athens to reject Ankara's offer of assistance in fighting the fires raging on Greek soil, as there are already many problems waiting to be fixed between the two countries

There is an ongoing natural disaster in the highly populated Attica peninsula in Greece. Forest fires of extreme violence and magnitude have surrounded the capital city Athens, the death toll is now 76, with almost 200 people injured, with many other people missing. The toll is unfortunately likely to rise.

Nobody knows for the time being how such devastating fires started almost simultaneously in two different areas surrounding the residential towns of Rafina on the east of Athens, and Kineta on the west. Due to some delay in evacuating the residential population, there have been terrible scenes of people imprisoned in burning areas. Most people fled to the seaside, finding refuge in the water, but this was without considering the deadly smoke stemming from the fires.The Greek government asked for help from the European Union countries, Spain and Portugal immediately offered assistance and Canadair firefighting planes. Southern Cyprus immediately sent a relief plane with a brigade of 60 firefighters. Israel offered immediate help, so has Turkey, through the declarations of Minister of Foreign Affairs, Mevlüt Çavuşoğlu, who also called his counterpart in Greece. Çavuşoğlu publicly declared that Turkey was mobilizing all possible resources in material, planes and work force to be ready to help Greece. Up until now, the Greek government has not responded to the offer.

A number of important lessons should be drawn from this immense Greek tragedy. Proficient scholars as Spyros Sofos and Dimitrios Triantaphyllou, who openly question the "failure" of the Greek state apparatus, have already done this.

Triantaphyllou wrote in his blog "Unfortunately, life is full of tragedies with which countries and their collective memories have to deal as has been the case with the Soma mine disaster of May 2014 in Turkey, or the repeated shootings is a number of schools in the United States, or the numerous terrorist attacks in Paris, Brussels, Istanbul and elsewhere. But to have so many deaths from wildfires, whether these are the product of arsonists or of natural causes, is incomprehensible. Greece is, after all, a relatively wealthy European country in times of peace. Blaming the fires on asymmetric threats, including the possibility of sabotage, as the government is suggesting is, I beg to differ, irrelevant. If the state cannot act in a concerted manner to save lives and property at times of asymmetric threats, what use does one have for it? What is its role?"

Sofos goes even further in questioning the role of the government by saying, on social media: "But all this reveals something else; the utter and devastating failure of a state (I am not talking about the government which however is one of the worst symptoms of this failure) to take care of the people it is supposed to care for. State failure is not a Middle Eastern or African phenomenon as some comfortingly think (not even a property of Southeastern Europe for that matter but this is not the time... ). It is staring us through the piercing eyes of the charred bodies, it is heard through the wailing of the survivors, it is choking us just as the smoke that we have to breathe, it is felt through the fear and the agony of those of us trying to discover the fate of our loved ones. It is also our responsibility, the product of our complacency, the result of our atomization, the outcome of our resignation. This is not a time for mourning as some suggest, hastily recommending postponing discussing blame and responsibility. This is time for ruthless introspection and reflection. We owe it to the dead; we owe it to the survivors. At the end of the day, we don't deserve this, no one does."

This extremely sharp, intelligent, sensitive, deep, on the spot analyses, gives all of us immense material for reflection and probably action. I have taken the liberty to quote both academicians without asking their consent, as far as their views were public and deserve to be known by as many people as possible.

I myself would like to add a perhaps forgotten dimension to the analysis of this tragedy: The absence of tangible solidarity between Greece and Turkey. Our respective (and common) history is so full of atrocities, wars, deportations, injustices committed, respective accusations, that we need to implement, to multiply and to cherish all possibilities of solidarity and help. It is not at all a good idea to reject Turkey's offer for help on the part of Greece. Turkey needs to extend a helping hand to Greece, as much as Greece needs to take this offered help. By Tuesday night most of the fire was abated, without being totally put out. There will be an immense effort to be done to rescue the populations, to rebuild and restore burnt habitations and towns. I would solemnly ask the Greek authorities, as a simple Turkish citizen, to allow Turkish help for such endeavor. We still remember, with deep emotion, the incredible help extended by Greece in the aftermath of the 1999 earthquake to Turkey. We still remember the standing ovation former Prime Minister Yorgos Papandreou received at Istanbul University after the earthquake. Both populations need to multiply such kinds of gestures. This is not a pardon, this is not oblivion; this is our debt to coming generations to surmount enmities.