Italy versus the EU: A dangerous bout 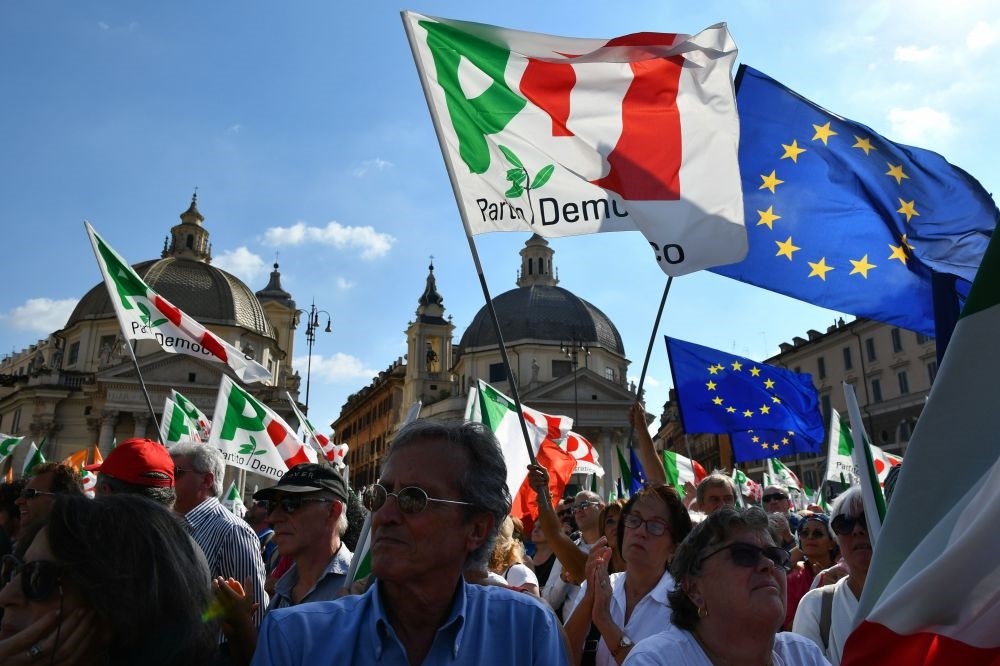 Supporters of Italy's center-left Democratic Party wave party flags and flags of the European Union as they gather for a rally in Piazza del Popolo in downtown Rome to protest the government policies, Sept. 30.
by Emre Gönen
Oct 02, 2018 12:00 am

Italy is not Greece, nor Hungary. It does not stand as a peripheral country, and it definitely has some points regarding the inadequate migration policy of the EU

Italy was one of the founding members of the European Union. It was involved in virtually every major integration project in the aftermath of World War II and positioned itself as one of the pillars of European integration. It was not Italy's economy and political weight that impressed the French and Germans in the late 1940s, but instead the foresight of politicians like former Italian Prime Minister Alcide de Gasperi who guided Italy's normalization after 21 years of fascism under Benito Mussolini.

The Italian "miracle" happened mostly under the umbrella of European integration, but it did not turn Italy into a big player in the EU. It remained a big economy, with mostly short-lived coalition governments up until the early '90s. It also produced important politicians who helped frame and structure today's EU – among them one of the founding fathers of the EU, Altiero Spinelli.

The total dismembering of the Italian political class, after repeated scandals and the Mani Pulite (Clean Hands) operation in 1990, has seen old and deep-rooted parties disappear, including the Italian Socialist Party, the Italian Social Democratic Party, the Italian Liberal Party and more importantly, the monumental Christian Democracy. This created a sort of second Italian republic, where conventional forces either did not exist or totally changed their structure and strategy, like the formidable Italian Communist Party, the biggest communist movement in Western Europe.

The void created by the disappearance of old political movements was filled by new movements, not precisely structured political parties but mostly think tanks or debate clubs, supported by media moguls or financial groups. The most striking example remains Forza Italia (Go Ahead Italy) created by Silvio Berlusconi, who dominated Italian politics for 14 years, mostly in power but in the opposition also. His total economic failure and corruption charges brought him down in 2011. At the time, Italian debt was already a big problem, totaling 1.9 trillion euros – today it has amounted 2.3 trillion euros.

The aftermath of the Berlusconi era has been total turmoil for Italy, except when Matteo Renzi was elected prime minister with the objective of reforming the Italian economy and political life, coupled as usual with austerity measures. Despite some important changes, an ill-prepared and lost referendum brought a halt to the Renzi era, replacing the government with a deeply populist or openly extreme-right movement's coalition.

Since its presence in government, Giuseppe Conte and Matteo Salvini's Cabinet has never missed a chance to fustigate the European Commission and refuse to side with the EU's decisions. Already early in September, Italian Foreign Minister Enzo Moavero refused to endorse the commission's budget proposals by saying, "The commission's current proposal seems inadequate as it doesn't sufficiently answer citizens' concerns and expectations."

This rebuff from Italy brought the wrath of the commission. Pierre Moscovici, who runs the commission's economic and finance portfolio, called on Italy to cut debt and push economic reform instead of deepening deficits. The Italian government's budget plan for next year needs to be "credible in terms of numbers" but also in terms of "structural efforts," Moscovici said.

"Italy's economy needs reforms," he told reporters. "Stopping reforms and printing money instead is not going to save Italy."

So, this has led to tension between Italy and the EU. With Rome's debt currently standing at a towering 132 percent of its gross domestic product, making Italy's the second-largest debt ratio in the eurozone after Greece, it would be ill-advised to say the least for Italy confronting the European Commission and central bank on such a delicate issue.

Italy is not Greece or Hungary. It does not stand as a peripheral country, and it definitely has some points regarding the totally inadequate migration policy of the EU. Nevertheless, an open conflict between Italy and the EU could harm both parties much deeper than first thought. Mario Draghi, governor of the European Central Bank, has tried to calm down the debate precisely because nobody can afford a huge Italian debt crisis.