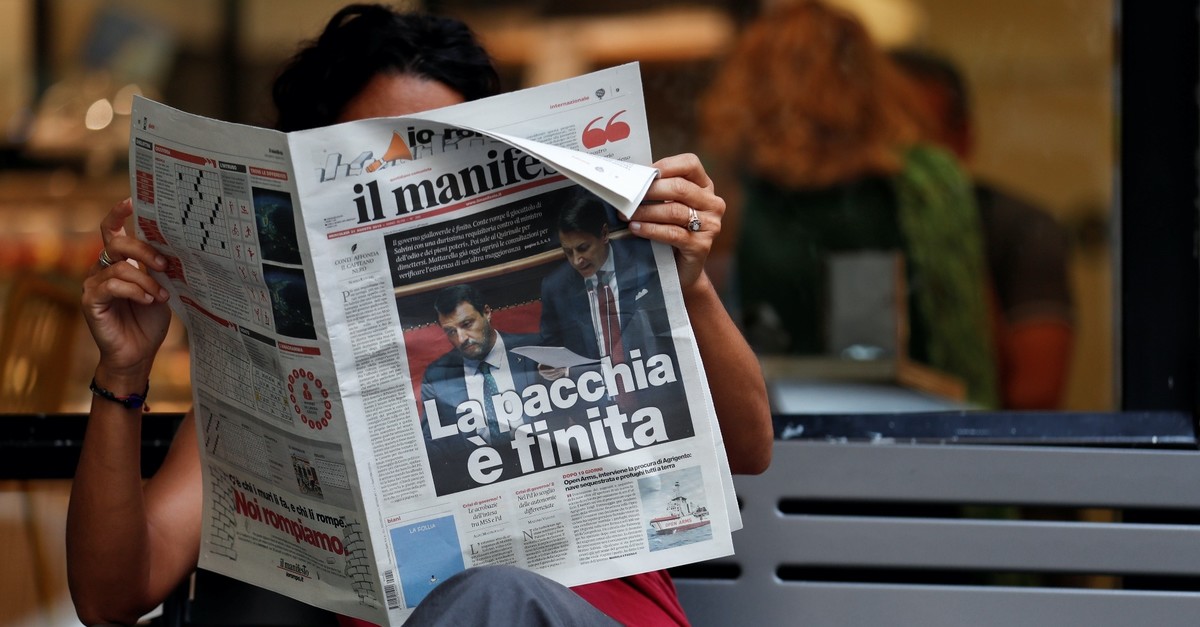 An Italian woman reads a newspaper with news of the government crisis and the resignation of Prime Minister Giuseppe Conte, Rome, Italy, Aug. 21, 2019.
by Emre Gönen Aug 24, 2019 12:02 am

Italian politics are in turmoil. One could even say they are a mess. The rather disparate coalition of political parties in power imploded in a way no one expected. The Lega Nord, which is turning into an overtly fascistic political movement, has decided, under the guidance of its leader, Deputy Prime Minister Matteo Salvini, to scuttle the government.

Italy is in a dire situation because of Lampedusa island, which has become almost a mandatory crossing point for illegal migration from Africa to Europe. The absence of a reliable state structure in Libya has opened the doors of the Mediterranean coast for illegal trespassers. This has also created an infamous environment of human smuggling, kidnapping and enslavement that remains a shame for all humanity.

The migratory wave has been mostly created by climate change and the unbearable economic and political consequences in the sub-Saharan regions. Considering the progress of global warming, it would be naive to think that there will be any reversal of the matter any time soon.

The European Union, the leader in humanitarian aid, does not have a concrete plan for how to contain the migratory movement. More importantly, it should be pointed out that fighting climate change is way beyond the EU's capacities alone.

However, even within the EU there are conflicting views creating deep divergences between member states about how to manage migrant policies. There are countries with liberal, more accommodating approaches to illegal migration and asylum seeking, but their number is dwindling.

Some member states openly oppose the presence of migrants on their soil. This turmoil prevents the EU from implementing and efficiently maintaining migration policies, which in turn has fueled Italian resentment. Italian authorities have been complaining about being abandoned by the EU. For the last few years, the whole situation has not improved.

In a sort of semi-legal retaliation, Italian authorities practiced lax control over migrants on Italian soil, meaning the migrants were free to leave Italy for more the promising lands like Germany or the U.K.

Since Salvini became the all-powerful interior minister, he has taken advantage of the platform created by illegal migration for domestic politics. He has been refusing humanitarian ships in Italian ports and rejecting offers to share the political burden of migrants from Spain, France and a number of other EU states by saying he will not allow another migrant to set foot on Italian soil.

He recently declared that he would not accept any more migrants "because there are millions of Italians unemployed." He said it openly, as if the endemic unemployment in Italy has been caused by African migrants.

Nevertheless, he said it because it offers a pure populist, easy-to-buy explanation for his voter base. He said it because people want to hear that the problems of a sophisticated and developed economy like Italy can be reduced to the existence of illegal migrants.

This is purely in the style of Mussolini, who dexterously manipulated the Italian situation back in 1919, when the governments were frail coalitions and the war effort consequences dire. Not that Mussolini won a democratic election, but he saw the opportunity to get power without necessarily winning a landslide electoral victory.

It would be unfair to compare Salvini to Il Duce, but the fact is neither of them offered a tangible program. The search for "order" was a common feature, together with the glorification of "work."

Such primitive slogans do not work in times of peace or in societies where there is a modicum of stability and confidence in institutions. In 1919, none of these existed, and the threat of a revolutionary workers' movement was real.

In 2019, 100 years later, Italy has a wealthy, developed economy and functioning democracy, despite the Lega and neo-fascistic movements. But there has been instability and a terrible loss of confidence in the political class and institutions after the Mani Pulite period of 1991. The Italian public has never really recovered from the demise of the Italian political class.

Salvini is asking for snap elections, thinking that the time is ripe for an electoral victory for his party. For now, Italian opposition parties and the public seemed mature enough to not embark on an obscure adventure with Salvini at the helm.

Still, we had the same opinion before U.S. President Donald Trump's election, thinking that the American electorate was mature enough not to buy all the irrational digressions of a former, obscure business tycoon. I personally never seriously envisaged that Boris Johnson would be elected prime minister in the U.K., either.

Therefore, before putting forward any analysis concerning Italy, one has to take into consideration the scenario of a victorious Salvini, with a single-party government. In such a case, we will not be out of the woods. Not Italy, the EU nor the Turkish economy, which desperately needs better integration into the single market.