How is the Turkish military operation perceived abroad? 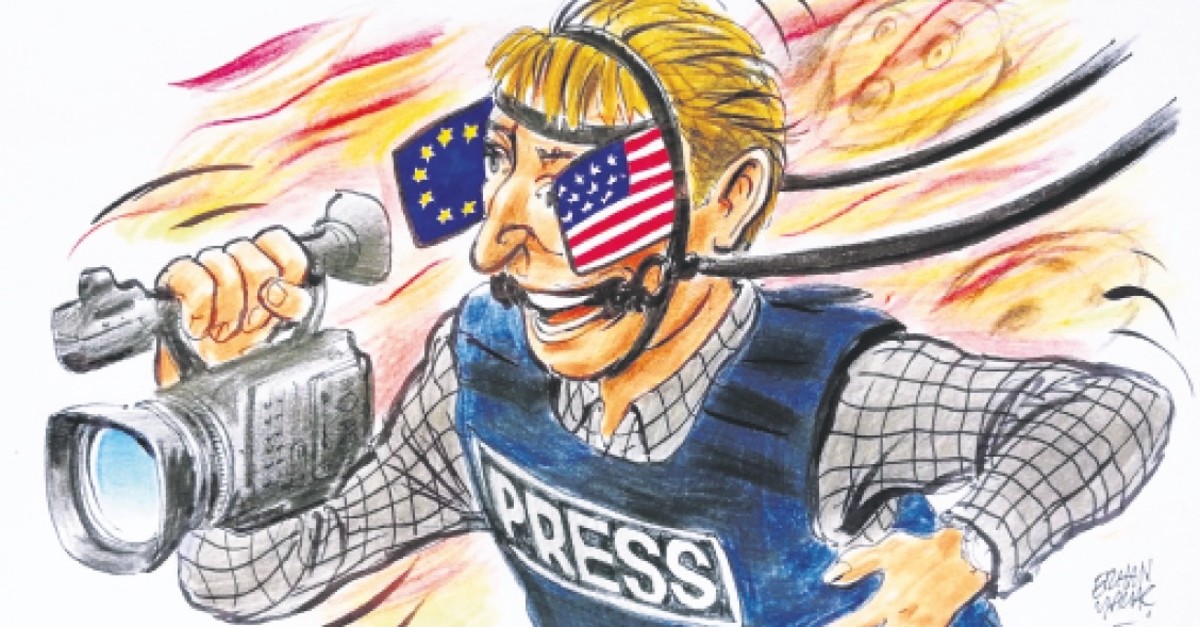 The news came as a big surprise to everyone: U.S. President Donald Trump, in his "infinite and unmatched wisdom," has decided northern Syria is not really his concern. After having supported and armed PKK-affiliated People's Protection Units (YPG) terrorists for years, after having helped them dominate the whole region, the U.S. decided to back off, moving its small number of troops. The YPG acquired immense international recognition for its resistance against Daesh, especially in Ayn al-Arab, and the U.S. withdrawal looked very much like treason in the same news reports.

Turkish authorities have long criticized the "terrorist corridor" along the Turkish-Syrian border, established by the YPG, which has been ruling these provinces after having overthrown the Daesh. However, before that, the Bashar Assad regime had allowed the YPG to take control of this part of Syria in retaliation to Turkey, who was supporting the anti-Assad opposition.

This is not the first time the Syrian regime played the Kurdish card to put Turkey in a tough spot. Under the Hafez Assad regime, Abdullah Öcalan lived safely in Damascus, under the regime's protection, whereas his militants were waging a terror war in Turkey, claiming thousands of military and civilian lives. It took almost a war in 1998 to make the Syrian regime deport Öcalan to Russia.

After that, both countries signed a "good neighbor agreement," known as the Adana Accord, which worked satisfactorily up until the Syrian civil war. The Kurdish struggle in the Middle East and Turkey has always been contemplated with a lot of understanding and sympathy in Europe.

Starting with the demise of the Mehabad Kurdish Republic in 1947 in Iran, all Kurdish attempts to establish independence or some autonomy have been suppressed in the region by different powers. Practically all of the Kurdish "liberation" attempts and movements have relied on U.S. support, and they have all been extremely disappointed and "betrayed." Just remembering Molla Mustafa Barzani's fate against the Iraqi regime is eloquent enough.

Iran, Iraq and Turkey remain the three main countries hosting almost all of the world's Kurdish population. Some also live in Syria and Caucasian republics. Nevertheless, the majority of the population is based in Turkey.

The sustainability of the "Kurdish cantons" in northern Syria was a dream in regions where the majority of the population was Arab - thanks also to Hafez Assad's policy of establishing an "Arab belt" between Turkish and Syrian Kurds. So long as the U.S. was there, patronizing, Rojava could survive.

With the U.S. gone, this territory will fall into the hands of the regime. Turkey has been winning the conflict on the ground, so long as the YPG "resistance" was reduced to firing mortars over the Turkish borders, in civilian areas. But if we consider the world mass media and the reactions of the public opinions, never has Turkey faced such a unanimous condemnation.There has yet to be a single positive reaction to the Turkish military operation. Even though President Recep Tayyip Erdoğan has reiterated time and again that a safe zone will be established and cities will be built to rehabilitate Syrian refugees, no opinion leader in the world has supported Turkey's strategy. On the contrary, all our "allies" are taking two major threats very seriously.

The first is the fear of a Daesh resurgence. There are prison camps in northern Syria where hundreds, some say thousands, of Daesh terrorists are being held. Their families live in other camps, and their respective countries, mostly European, refuse to take them back.

The YPG has been adamant in the possibility of these prisoners being set loose because their military forces would be occupied elsewhere instead of guarding the detention camps. That threat had a huge effect on

European public opinion. This has further tarnished Turkey's image and the legitimacy of its intervention in the eyes of the European countries. But there is more.

Most of the EU countries refused to take back their nationals who have been fighting for Daesh. Legally speaking, it is very debatable to refuse the return of these people with their families to their home countries to face trials. So leaving them in the hands of the YPG was hardly a solution, but that pleased everyone as a status quo. Now that the Turkish intervention has destroyed the status quo, EU countries are doubly angry about the move that will obligate them to come out with a new solution for Daesh fighters - a solution they will probably not be able to find.

Turkey has rendered the whole dispute harsher by also threatening to open the gates to Europe for the nearly 4 million refugees it hosts. This was Europe's second-most dreaded alternative. In terms of realpolitik, such remonstrance may help, and it actually did help. No implementable measures have been taken against Turkey. NATO has been mildly advising the use of proportional force, while the U.N. Security Council did not adopt a condemning resolution. U.S. Congress has prepared a list of harsh measures, but they remain pending.

However, in terms of credibility, Turkey is undergoing one of the most challenging and difficult times in its history. Not only could the government explain the legitimacy and need for such a military operation, but it also runs the risk of being accused of having resurrected Daesh if any terror attack hits any country.

The Turkish population has seen more than 300 victims, with more than 1,500 others injured in Daesh terror attacks on Turkish soil.

It would be unbelievable to think that Turkish authorities would support Daesh, but that is exactly how it is being perceived. Much more should have been done in the past to shed light on Turkey's position and its struggle against Daesh in the international arena. It is now definitely late, but not too late to establish a new informative strategy regarding the Turkish struggle against the terrorist group.

Now that the military operation seems to be approaching its end, the YPG has asked for the help of Russia and the Iran-backed Assad regime, and the real image of the alliances on the ground has become less blurry. The YPG trusted the U.S. before, and the Syrian regime before that; now we are back at square one again. In any case, Turkey has to be prepared to face very difficult and dangerous developments in the international arena.