A plot against the AK Party and Turkey 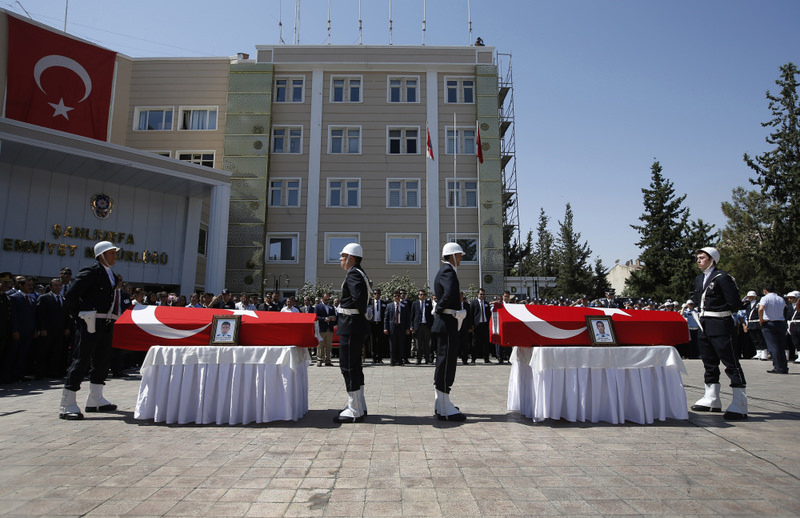 Turkish police officers stand in attention in front of the coffins of police officers Feyyaz Yumuu015fak and Okan Acar, who were found shot dead in their home, during a funeral procession in u015eanlu0131urfa province, Turkey.
by Etyen Mahçupyan Jul 24, 2015 12:00 am

The true message of the terrorist attack in Suruç is now clear: To hamper the reconciliation process with efforts to strengthen the relations between the Kurdish political movement and the left-wing

The recent massacre committed by a suicide bomber in the southeastern town of Suruç implies that the picture that has become ordinary in the Middle East is being exported to Turkey. There is not much doubt about the function of this suicide blast that claimed the lives of 32 people. The first question is what does the attack on the members of the Federation of Socialist Youth Associations (SGDF) who gathered in Suruç to head toward Kobani mean? Obviously, the objective must be sought in the name Kobani. The massacre gains significance not in the context of anti-socialism, but in the connection between the left and the Kurdish question.

Following the incident, we can guess that the Kurdish political movement will feel spiritually indebted to the left and will not be able to avoid promoting it. The consolidation of relations between the Peoples' Democratic Party (HDP) and the socialist left will certainly make it natural that this party will develop stiffer and more austere policies against the interim Justice and Development Party (AK Party) government. It would not be surprising if such an attitude prompted an exclusivist response from the AK Party. At least we must presume that a good number of younger generation AK Party members will have this feeling. Also, it would be surprising if such an atmosphere leads to progress or deepening of the reconciliation process. Therefore, by considering the target of this attack alone, it becomes a very strong possibility that this incident was instigated by some who do not want the resolution of the Kurdish question.

It is useful to take this reasoning a step further. What would the consequences be if the reconciliation process was suspended in Turkey? The answer should be sought on two levels: How would this affect the AK Party and Turkey? The developments that took place after the elections must have shown everyone that it is not that easy to get rid of the AK Party. A coalition government without the AK Party is not possible, and if early elections are resorted to, the AK Party is highly likely to increase its vote share. Some may have thought to give an "ungovernable" Turkey to the AK Party now that it cannot be overthrown. A government that cannot lean toward peace regarding the Kurdish question will inevitably face such an ungovernable situation. Being able to lean toward peace will require cooperation with the Peoples' Democratic Party (HDP) and PKK. If Turkey shifts toward an artificial dichotomy of right and left, the AK Party's chance of finding a peace partner will gradually decrease and Turkey might go back to the brink of the pre-1980 atmosphere. The picture becomes even clearer when we consider the connection between the left and the Alevi question, which still remains unresolved, and some Alevi youth groups' affinity with the Revolutionary People's Liberation Party-Front (DHKP/C), which continue acts of violence.

This kind of development will have a great impact on foreign policy as well. It would be desirable to confine a Turkey that is ruled by the AK Party to the right, and the manipulation of public perception that Turkey becomes Sunni will mushroom. This situation might incite anti-Sunni actors in the Middle East to shift their actions toward Turkey. Consequently, the government might put aside or be forced to put aside its desire to be an influential actor in Syria for the sake of preventing the expansion of the Middle East quagmire toward itself. In the case that it resists such a development, we can face an operation aimed at further aggravating an ungovernable state.We do not know whether this will occur or not. Developments also depend on what the AK Party does. If swift steps are taken regarding the Kurdish and Alevi questions, democratic reforms are put into practice, the requirements of the rule of law are fulfilled and a step is taken toward a new constitution, this mass murder will be foiled as well. A coalition government has to pay attention to this objective. If not, an election must be prepared for with a staff that can digest "the new."
RELATED TOPICS