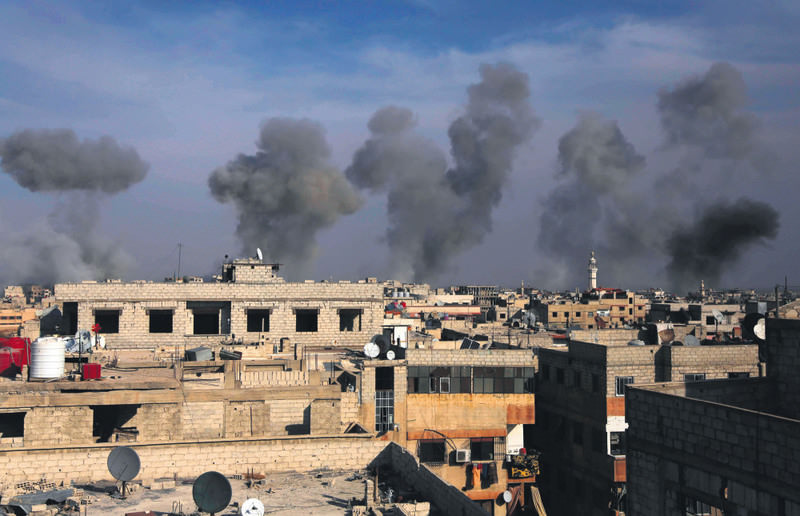 Smoke billows after airstrikes by regime forces on the town of Douma in the eastern Ghouta region, a moderate stronghold east of the capital Damascus, Syria.
by Etyen Mahçupyan Dec 18, 2015 12:00 am

Turkey which positioned the Turkish Armed Forces in the Middle East, increases its presence in the region by strengthening relations with its current partners in Iraq together, with whom it is part of the anti-DAESH fight

It is easy to liken foreign politics to a game of chess. However, this metaphor is misleading. In chess, one always has the option of playing one more game, and the players are in equal positions at the beginning of each game. However, in real life, the result of every game changes the power balances of following games. Consequently, foreign politics resembles poker in that it requires the players to act as gamblers to some extent because what really matters is not to get the best out of one play, but to increase acquisitions by standing as a player over the long term.

It seems meaningful to read Turkey's latest decision to deploy a military unit to the Bashiqa region near Mosul in this context. The Turkish Armed Forces (TSK), which has been positioned in Northern Iraq since 1996, has been deployed at a spot outside its realm of control for the first time. The joint action with peshmerga forces is a good example of this move. The TSK has been training peshmerga forces as part of the anti-DAESH fight and one of the most dramatic results of this was saving Sinjar from seizure by DAESH. Now, the Bashiqa military base, which is only 12 kilometers from Mosul, will have the same function. Besides, its diplomatic grounds are also in accordance with the cooperation agreement signed between Turkey and the Kurdistan Regional Government (KRG). However, instead of peshmergas, some groups serving former Mosul Governor Osama al-Nujaifi and the Turkmens who fled from Tal Afar after DAESH seized the region are expected to be trained.

Without needing a detailed analysis, one can argue that with this step Turkey is trying to reinforce its position in Iraq and increase its bargaining power by strengthening the present partners, while also endeavoring to enhance its self-defense ability thanks to its partners in the region. One can also argue that this move is not risk-free, considering the fact that it concerns the Baghdad government and is regarded as "an assault to the right of sovereignty."

Consequently, three significant questions can be asked with regard to the context. How does Turkey plan to manage this risk? Which move in the previous game made Turkey take this step? What kind of an advantage will be pursued following this game thanks to this step?

We currently can't answer the first question, only in moderate diplomatic language. It is hardly unthinkable that Turkey has the tacit support of the coalition even though it hasn't received any overt support from the U.S. In any case, the result does not change anything as the Iran-Russia front will make the same statement. Turkey can provide the protection necessary for itself as long as it tries to advance its capacity to move without disturbing coalition forces.

The second question asked above is more instructive in terms of grasping the tangled nature of the Middle East. After Tal Afar was seized by DAESH, Iran took a step that escaped attention in the political realm but actually created the possibility of leading the region to a break in the long term. The Shiite dominated group named al-Hashd al-Shaabi was put under the protection of Iran. In other words, Iran uses every act of expansion by DAESH to sharpen the Shiite-Sunni conflict in the region, which leads us to the answer the third question. Turkey is trying to preserve a relationship network that includes both Sunni and Shiite Turkmens, and the Bashiqa base will be used as part of this. As employing an increasing number of military personnel of Arab and Kurdish origin indicates, Turkey thinks that a cosmopolitan Middle East encompassing various identities will favor itself, and hopes that this long-term policy will introduce advantages in the next game.
Last Update: Dec 18, 2015 1:04 am
RELATED TOPICS