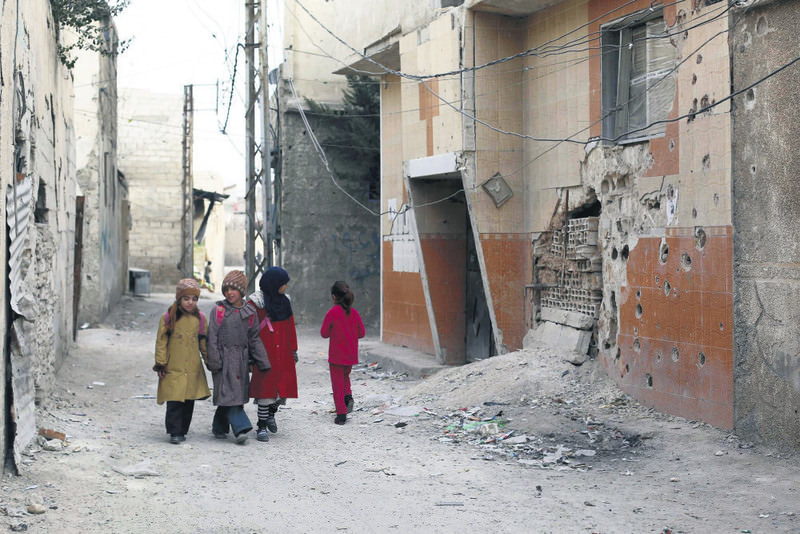 Syrian children walk through a moderate-held area of Douma on the outskirts of Damascus, Syria.
by Etyen Mahçupyan Jan 02, 2016 12:00 am

Turkey is on the threshold of an important decision. Turkish society is not against integration, but we have not yet discussed to what extent the state is willing to perform it and whether it is ready for administrational difficulties

In May, Ankara ceased its open-door policy for Syrian refugees. Since then, new people have not been accepted, and those trapped in Syria seem to have been left to their fates. Those who voluntarily went back to Syria and who are covered within the scope of Turkey's temporary protection can return to Turkey. To do this, however, they must first of all reach the border. This picture increases Turkey's humanitarian responsibility and sensitivity. It is out of the question for Ankara to consider Syria with a series of cold-blooded calculations as most Western countries do.

However, we cannot condone the other side of the coin. In cities letting in Syrian refugees, job losses and rises in inflation can be experienced along with the revival of the market, and this might cause trouble particularly for low-income groups, which can eventually evolve into xenophobia. Consequently, the issue Turkey must tackle is not only the resolution of Syrians' problems and their integration. In addition, how the general order, psychology and socio-economic balances are preserved and strengthened is a question that should be asked in the context of integrating Syrians.

From this perspective, it is not hard to foresee that the country will undergo a restructuring process in every sense of the term due to the arrival of Syrians. Maybe this is happening at the right time, because at any rate, Turkey has to draft a new constitution and redefine citizenship. Equal citizenship, which requires coexistence with Kurds, is also a prerequisite for coexisting with Syrians and possible new migrant groups with different ethnic or religious identities.

The first step in the search for a new legal ground is the requirement to accept that Syrians are not migrants, but refugees, and taking refuge is a human right. But whether these people will be granted the right to become citizens will be the determining political choice. It must be emphasized that citizenship is currently evolving from being a favor of the state to a right that the state has to accept.

The reason for this is that it is difficult to keep migrants in grey zones after a while. In other words, neither foreignness nor citizenship is enough in governing these social groups. We saw one of the most tragic outcomes of this in the tendencies for radicalization of immigrant children who are legal citizens of European countries, but nevertheless are alienated from the countries' cultures they live in. The same situation can go for Syrians in Turkey. The problem is that immigrants compare their conditions in the country they come to and the country they leave from when they first arrive in a foreign country, and generally they see positive progress in their lives. This sense is felt much more intensely by refugees since they flee to a new country to survive. In time, however, their new positions in the new country turn into routine and constitute a new standard. Then comparisons start to be made considering the future instead of the past. It is then questioned how far the current situation can last and what kind of a life is awaiting their children. At this point, favors withheld or not presented by host countries overshadow favors already bestowed, which is a factor that reinforces thoughts of foreignness.

Turkey is on the threshold of an important decision. Turkish society is not against integration, but we have not yet discussed to what extent the state is willing to perform it and whether it is ready for administrational difficulties Ankara will come across if it starts to open itself to the neighborhood. In the following process, during which a new constitution will be brought to the agenda, the country will have to make fundamental choices in historical and cultural terms.
Last Update: Jan 02, 2016 1:00 am
RELATED TOPICS