Who rejoices because of the Paris massacre? 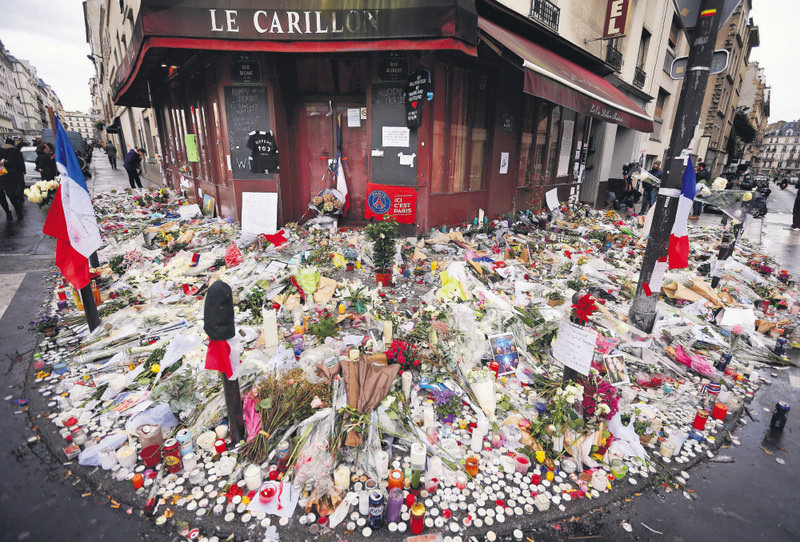 Flowers and candle tributes are placed at the Restaurant Le Carillon in Paris, after last Friday's attacks.
by Fahrettin Altun Nov 20, 2015 12:00 am

Accusing Islam of the attacks in Paris rather than DAESH, the terrorist organization, with no association whatsoever to the religion itself, will only serve to further spread Islamophobia, not end terrorism

Suicide bombers blew themselves up, fired guns and killed civilians in Paris at a time when the world had started considering Syrian President Bashar Assad's removal from power, Europe has been cornered by a massive influx of refugees and the G20 summit in Turkey was going to focus on the above issues.

After striking Ankara, DAESH shed blood in Paris - Turkey and France - the two countries that have been saying all along that the Assad regime is the number one security threat in Syria.

France, like Turkey, considers DAESH a national security threat and a terrorist organization and has been fighting DAESH at home and abroad. Both countries, however, oppose efforts to whitewash the regime citing the DAESH threat.

A quick look back at DAESH's history would establish that the organization has served the regime's interests all along. With DAESH growing stronger, Assad was able to cling onto power. In the meantime, the United States and a number of other Western governments adopted the view that Assad's removal from power would help DAESH - a claim that the Kremlin and Tehran brought up in the first place. France distinguished itself from the rest by stating time and again that protecting the regime was not meaningful, and threw its weight behind the moderate rebels.

None of this means that the French government's Syria policy reflects Turkey's views exactly, but both governments agree on the fact that the Assad regime is the root cause of the crisis. Paris and Ankara, likewise, believe that the Syrian civil war has evolved from a regional problem into a source of global instability.

Let us go back to the original question: Who rejoices because of the Paris attacks?

In the wake of the most recent terrorist attacks, the Syrian regime's supporters began to hope that Turkey and France might soften their stance on Assad's future and reconsider their support for the moderate rebels. Although hardly anyone dared accuse French President François Hollande's government of orchestrating the attacks, a handful of people claimed that Paris had been "supplying weapons and funding terrorism." Pro-Assad figures in Turkey did not miss the opportunity to exploit the attacks either.

PKK supporters, too, rejoiced. At a time when the Turkish security forces deal heavy blows to the militants, many PKK advocates in Syria find themselves confused about the merits of the Rojava romance. Although the terrorist organization likes to take credit for fighting DAESH, it has been unable to sweep human rights violations in Democratic Union Party- (PYD) controlled parts of northern Syria under the rug. As such, it is good news for PKK-affiliated movements that DAESH, once again, has the world's undivided attention. One cannot help but think about Peoples' Democratic Party (HDP) politicians who could not hide their smiles at a public event just days after the Ankara bombings.Finally, the Paris attacks helped the world's Islamophobes regain their appetite for slander. In recent days their main goal has been to keep Islamic radicals, as opposed to terrorism, under the spotlight. In Turkey, too, Islamophobes have launched a smear campaign to associate terrorism with Islam.

At the end of the day, neither group got what they wanted. Their only accomplishment has been to serve terrorism.
Last Update: Nov 20, 2015 2:06 am
RELATED TOPICS