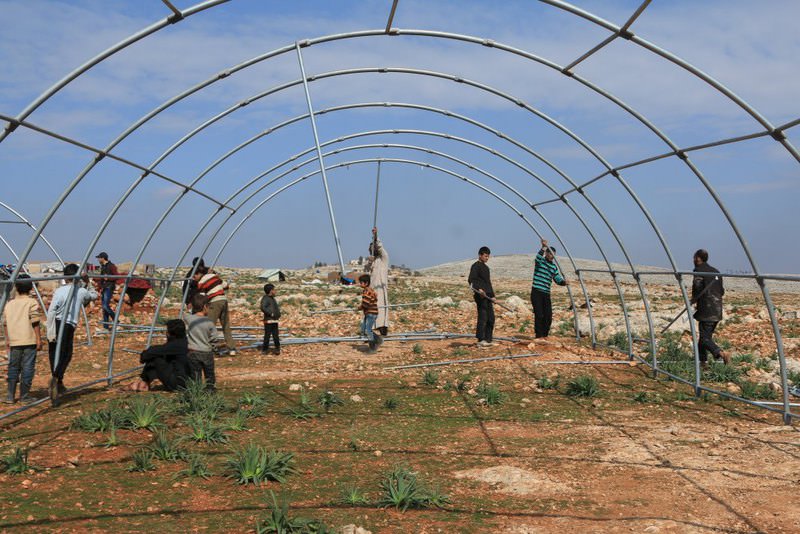 Internally displaced Syrians who fled from Aleppo, are constructing a tent inside a refugee camp in the village of Batabo, northern Idlib countryside, Syria.
by Fahrettin Altun Feb 17, 2016 12:00 am

The Turkish Armed Forces on Saturday shelled Democratic Union Party (PYD) positions in northern Syria, including the Mannagh Military Air Base, which the group had seized last week. Turkey responded to gunfire from the PYD-controlled town of Maranas against a military zone in Kilis, the government stated. The targeting of YPG positions, however, indicates that Turkey might introduce new instruments into its Syria policy.

Five years on, the crisis continues to deepen as the Syrian people pay a heavy price for the raging power struggle on the ground. Russia's recent interference in the conflict has created new opportunities for the Assad regime and the PYD - players that Turkey considers the main problem in Syria and a terrorist organization, respectively. The short-term consequences of the most recent developments include a growing terrorist threat near Turkey's borders and new refugee waves. To make matters worse, Turkey's Western allies, including the United States, are reluctant to take decisive steps to address pressing problems. Instead, they pay lip service to fighting DAESH and watch from the sidelines as the situation spins out of control.

One thing is clear: There can be no diplomatic solution in Syria without a military campaign.

Nowadays, a terrorist organization that Turkey has been fighting at home since the 1980s is mobilizing next door. As Turkish citizens become the target of terror attacks, the group is delivering weapons and ammunition to the perpetrators. The organization - whether you call it the PKK or the PYD - has been exploiting the power vacuum in Syria to seize control of certain parts of the country. By fighting DAESH, they tried to take the moral high ground. Finally, the group seized the opportunities that Russian expansionism and the Assad regime's policies presented. None of this, to be clear, was as influential as Washington's endorsement. In recent years, the Obama administration has not only armed the YPG but also granted the group some degree of international legitimacy.

Having constantly threatened Turkey for years, the PYD leadership now wants to take more decisive action. Although the government repeatedly tried to raise the issue with Washington, the Obama administration refused to acknowledge the problems on the ground. The Turkish military's shelling of PYD positions, in this sense, serves as a reminder to the United States and other stakeholders that the country demands respect for its red lines. Upon seeing that Turkey was willing to take military action in northern Syria, the United States urged the YPG "not to take advantage of a confused situation by seizing new territory."

Since 2011, Turkey refused to act opportunistically in Syria unlike the Assad regime, Iran, Russia, the PYD and the United States. Today, the country's position remains the same. The government has called on the international community to support Syria's native-born opposition groups. Over the past five years, Turkey tried to empower moderate rebels across ethnic and sectarian lines and help them achieve some level of representation in the international arena.

At this point, U.S. officials maintain that they have three priorities: 1) Remove DAESH from the 98-kilometer stretch of the Turkish-Syrian border. 2) Isolate DAESH in Raqqa. 3) Liberate Mosul. The main problem with the Obama administration's Middle East policy, however, is that accomplishing these tasks won't actually address the humanitarian crisis or the problem of terrorism in Syria.

As the Syrian civil war enters its sixth year, Turkey remains the only country developing concrete solutions to pressing issues. The time has come for the international community to unite behind the government's push for the creation of a safe zone and no-fly zone in northern Syria.
RELATED TOPICS