Fethullah Gülen and the United States 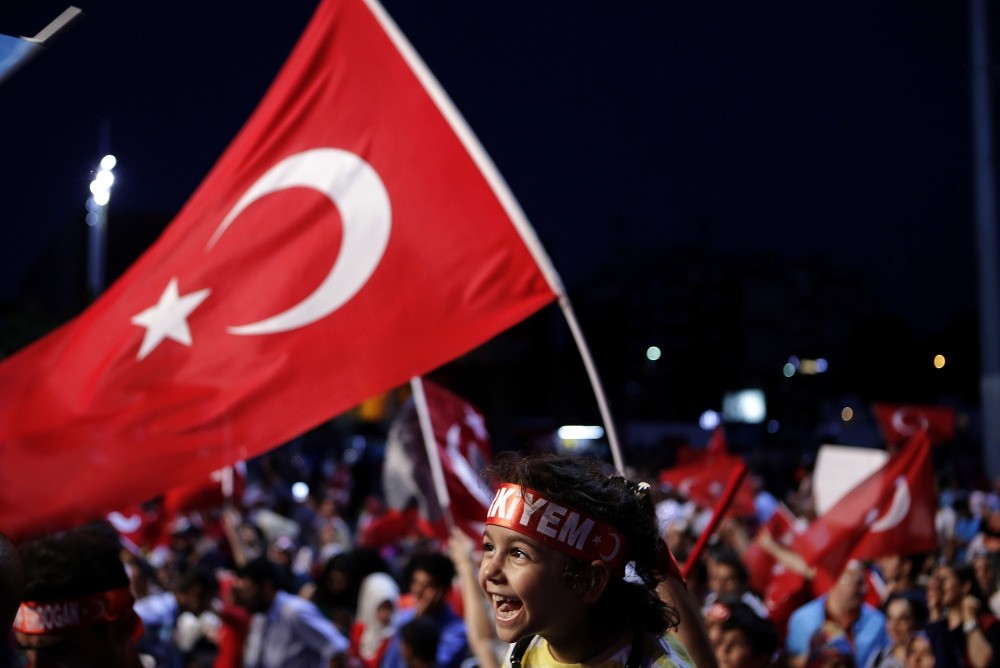 A child siting on the shoulders of an adult during an anti-coup rally at Taksim Square in central Istanbul, July 31.
by Fahrettin Altun
Aug 03, 2016 12:00 am

The U.S. has been defending the coup plotters so desperately that one can't help but wonder why they won't stop supporting FETÖ

At Vienna Airport, Austrian newspaper Kronen Zeitung published a controversial message to international travelers: "Going to Turkey on vacation supports Erdoğan." This message, spread by one of the country's top selling media outlets, fuels hostility - not just against Turkish President Recep Tayyip Erdoğan, whom they openly hate, but the nation he leads.

In Turkey, ordinary citizens thwarted a coup attempt orchestrated by a terrorist organization that infiltrated the military. People have been camping out at public squares to stand guard against threats. Not only did the country's democracy collapse, but it also became consolidated as a paradigm shift took place on July 15. President Erdogan's opponents in Turkey, who resorted to anti-Erdoganism in the past, experienced serious setbacks. While the authorities bring coup plotters and their accomplices to justice, certain steps are being taken to strengthen the state apparatus. For the first time in history, there is genuine cooperation between various social and political groups that are united in their opposition to the coup attempt.

The West, however, does not share the Turkish people's enthusiasm. What they desperately want is for Turkey to stop acting independently and according to its national interests and instead assume a passive role in the international arena. To be clear, it is the United States, not Europe, that is the driving force behind the anti-Turkey rhetoric. The Europeans are merely acting according to signals from the U.S. If European leaders were able to devise a strategy of their own, they could understand that the July 15 coup attempt could have meant destruction for the continent. Sadly enough, Europe lost its sense of direction a long time ago.

And how does the American political leadership behave? By mounting pressure on the media, they bullied mainstream news outlets to ignore the basic principles of journalism and attack Turkey. Over the past two weeks, U.S. officials have tried to characterize the situation in Turkey as a power struggle between two rival groups - as if there were two legitimate powers engaging in some kind of civil war. At the same time, the United States has falsely portrayed the government's response to Fethullah Gülen's terrorist group, the Gülenist Terror Organization (FETÖ), as a crackdown on dissent.

The U.S. has been defending the coup plotters so desperately that one cannot help but wonder why they will not stop supporting FETÖ. Why does Washington try to cover up Gülen's tracks? It would appear that they want to continue their cooperation with FETÖ to keep Turkey in line. Moreover, one could argue that FETÖ's access to information remains strong enough to make Gülen valuable for the U.S. government. Likewise, they might be concerned that a comprehensive crackdown on FETÖ could bring to light U.S. foul play in Turkey and elsewhere over the years.

As Turkey's official inquiry sheds light on FETÖ's crimes, Washington's relationship with Gülen will become a matter of domestic policy rather than a foreign one. While the involvement of a group in the United States in the failed coup attempt becomes clearer, the U.S. will have a lot more questions to answer. The very people who allowed Gülen into the country will be held accountable in the court of law and in the public eye. Knowing exactly where the current process leads, Gülen has started to beg his host country to allow him stay in the U.S. Let him get on his knees and beg - even though his words mean absolutely nothing.
Last Update: Aug 03, 2016 1:42 am