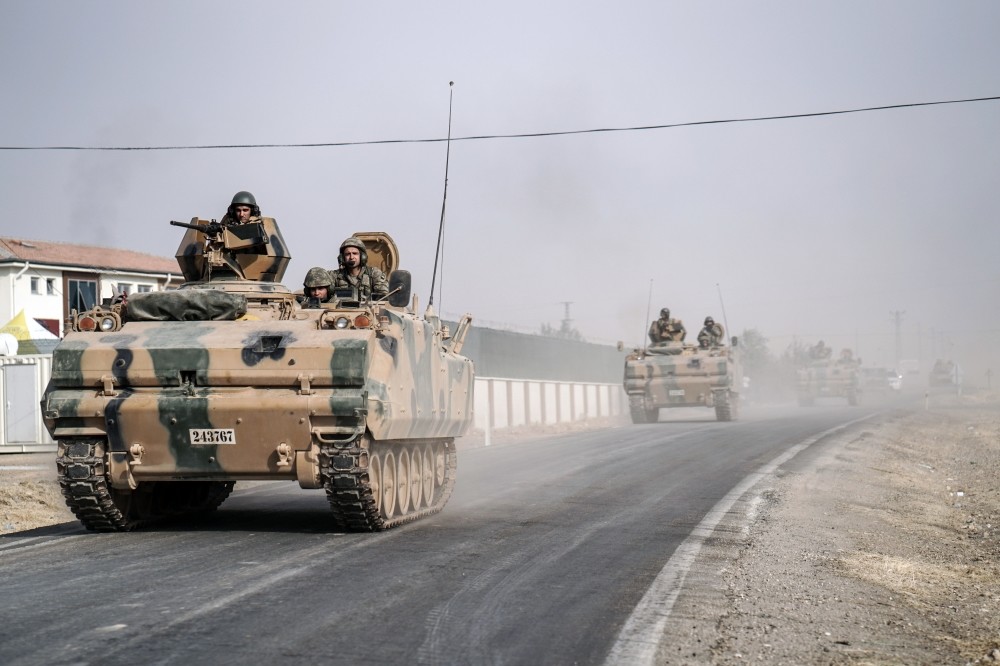 Turkish army tanks and armored personnel carriers move toward the Syrian border, Karkamu0131u015f, to support Free Syrian Army forces in the fight against Daish, Aug. 25, 2016.
by Fahrettin Altun Oct 07, 2016 12:00 am

Turkey is the only reliable country in the fight against Daish in the region. Iraq's objection to Turkey's military presence in Bashiqa only allows the terror organization to act more freely

On the eve of the Mosul operation, generally accepted as the turning point in the struggle with Daish, tension among international actors is gradually rising. The main reason behind this tension is the uncertainty on how the geography will be shaped in the aftermath of Daish. Different actors have myriad answers to the question of who is to fill in the space taken up by Daish, which has been one of the most important factors weakening the struggle against Daish until today.

Parliament accepted the resolution lengthening the military presence in Iraq and Syria through the votes from the Justice and Development Party (AK Party), Republican People's Party (CHP) and the Nationalist Movement Party (MHP) deputies at the beginning of this week. The only ones to object to the resolution were the Peoples' Democratic Party (HDP), the PKK's political wing. While acceptance of the resolution caused no debate or tension on the domestic front, different voices began to be heard from the outside. The Council of Representatives of Iraq announced that it did not accept Turkey's military presence in Bashiqa and asked that Turkey be regarded as an "invading power" and that whatever needed to be done in order to remove Turkey from Iraq be done. It expressed that it would apply to the U.N. Security Council. Iraqi Prime Minister Haider al-Abadi also evaluated Turkey's military presence in Bashiqa as an intervention in the domestic affairs of Iraq.

In response, the Foreign Ministry published a written statement remonstrating the Council of Representatives of Iraq's decision of Oct. 4. The statement expressed that this resolution was not a new one and that it has been renewed annually since 2007 and that its main point is to prevent the terror threat originating from Iraq that targets Turkey's national security. Another factor drawing attention in the Foreign Ministry's statement was that Turkey would continue the principled position it had displayed since the beginning of Iraq's sovereignty and territorial integrity.

While this tension was ongoing, another development occurred. The American spokesperson for the Combined Joint Task Force in Iraq, Colonel John Dorrian, made a statement to the detriment of Turkey and stated that "the Turkish unit in Iraq is not part of the joint task force." Dorrian also said, "The Turkish army on Iraqi territory has not come with official permission from the Iraqi government and is illegal," making an extremely harsh statement surpassing the bounds of diplomacy. I do not think Dorrian is so young as to not remember the 2000s, but if he is, he should do some reading of recent history. His country's irresponsible expansionism and policy of occupation played a central role in the fragmented Iraq of today and in preparing the grounds for the appearance of Daish.

The U.S.'s occupation of Iraq brought with it major security problems for the Middle East region as well as for Turkey. Unfortunately, the U.S. ending its active occupation of Iraq and withdrawal did not remove these problems. The main reason for this was due to them assuring the inauguration of a sectarian administration in the orbit of Iran and this administration ignoring, and even encouraging, oppressive policies that were enacted on the Sunni population. Daish benefited from the opportunity provided by the reactions against these sectarian policies and used it in order to aid in its spread. Turkey's main worry in the beginning was to prevent the enlargement of various terrorist organizations, the PKK foremost among them, by using the vacuum in Iraq. After Daish's invasion of Mosul in 2014, Turkey's military presence in Bashiqa transformed into a strategic area to be used against Daish.

Turkey's insistence on maintaining its presence in Bashiqa arises from weak management and a lack of authority on the ground. As Deputy Prime Minister Numan Kurtulmus said, when Daish invaded many Iraqi cities in a single day, Mosul foremost among them, there was neither an Iraqi central government nor an international coalition. As will be remembered, Iraqi soldiers left Mosul to Daish without firing a single shot, fleeing without even taking their weapons with them. After Daish's invasion of certain Iraqi cities, Iran's influence increased even more in Iraq. With the People's Mobilization Forces (Hashid Shabi) most prominent among them, Shiite militias began to be much more active in Iraq.

At a time when the operation of clearing Mosul from Daish is on the agenda, the reactions toward Turkey displayed by the U.S., Iraq, and Iran are all part of an effort to push Turkey out of the struggle against Daish. The main reason behind this is to ensure that Turkey will not have any influence in the post- Daish region. We see Turkey being made to face a policy of "containment," at a time when Turkey has been the most effective in the struggle against Daish through Operation Euphrates Shield.

How interesting it is that those who now want to leave Turkey outside of the struggle with Daish once accused Turkey of not struggling against Daish enough, engaging in slanderous propaganda stating that Turkey was actually aiding Daish for a long time.

The Bashiqa camp is just 12 km away from Mosul. At the same time, it is one of the most strategic positions in the process of taking Mosul back from Daish. On 250 acres of land, the Bashiqa camp continues to train local factions, including Hashd al-Watani (National Mobilization), and to strengthen the anti- Daish coalition.

However, it appears that the U.S. has entered into close collaboration with Iran during this process. The wish to leave the Turkmen city Telafer to Shi'a militias is an indicator of this. But such a decision will only open the door to an even worse sectarian conflict. Perhaps the U.S.'s strategy of establishing hegemony in chaos foresaw this as well.
RELATED TOPICS