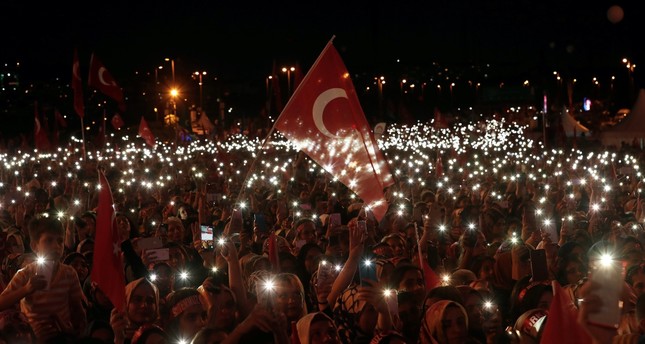 Two years have passed since the attempted coup of July 15, which was a serious attack on Turkey's state, society and democracy. In a sense, the attempted coup was an obstacle, an important challenge that was overcome by Turkey and the Middle East. In another sense, Turkey's people fought for democracy that night, resulting in a civil resistance and a democratic victory, the likes of which has not been witnessed in modern political history.

Turkey has fought both terrorist organizations and coups throughout its history. However, July 15, 2016 was the first time it faced a fundamentalist terrorist group embedded in the government. This coup attempt was also much bloodier than those in the past. The Presidential Complex, Parliament and security offices were bombed, while hundreds of civilians were killed and thousands injured.

What was the point? To create a Turkey without President Recep Tayyip Erdoğan. But why was Erdoğan in the crosshairs? His creation of an unpredictable Turkey, despite the standing status quo. The country has accomplished two things under Erdoğan's leadership after his election in 2002. First, a new path for the country. Second, taking the initiative to intervene in regional and global matters. Democratization and normalization in domestic politics, increased autonomy in foreign policy and growth in its economy have made Turkey a regional power. A few years after taking office, Erdoğan announced "Turkey's 2023 Aims," and thus made Turkey's intention of becoming a global power clear.

It was because of this focused progress that Turkey came to be the stage of a heinous plot planned in 2010 and executed in 2013, which could also be considered a plot of attrition as well. The July 15 attempted coup was the last link in a plot of attrition. In this sense, whatever the aims of the Gezi uprising, the Dec. 17 and Dec. 25 conspiracy and the PKK's new wave of attacks, those were also the aims of the July 15 coup attempt; more specifically, political instability, economic crises, societal chaos and the isolation of the country in the international arena.

Unfortunately, the Western world's reactions to the July 15 coup attempt left a lot to be desired. In fact, there are thousands of examples of Western media making it seem as though the West wanted the coup attempt to succeed. Case in point, CNN International made several statement, including: "Erdoğan himself caused this situation," "It is not the who that is important, but the why of the coup," "Those who carried out the coup did so in order to protect democracy," "A coup in reaction to Erdogan," "A coup of uncertain origins" when describing the problematic situation of the experience of the night of July 15, 2016. As an attempted coup was being carried out by the radical, fundamentalist Gülenist Terror Group (FETÖ), this same media corporation was trying to convince its viewers what was happening in Turkey was a fight between secularists and Islamists and that Erdoğan represented the Islamists and Gülen the secularists.

Fortunately, the July 15 attempt was unsuccessful; moreover, the public resistance created a new political environment in Turkey. Those who truly want to understand the new Turkey need to correctly analyze the resistance and the resulting changes in the country. The main the transformations that occurred in the aftermath of the coup attempt are as follows:

1. Westernization came to a standstill. In other words, the supra-political and universal position of the Westernization paradigm was removed. Relations with the West gained a new dimension. Instead of having a pro-West approach, Ankara initiated rational relations based on its own interests with the West.

2. Erdoğan's leadership was formalized and normalized. The fact that his leadership abilities were the foremost source of his position came to be accepted. This realization spread among both the opposition and the administration.

3. The government's understanding of threats unified. In this sense, the separation of the civilian and military sectors was removed. This closed one of the foremost doors to outside intervention, and security forces' movement increased.

4. A new security concept was created. At the center of this concept lies the strategy of eliminating terrorism at its very source. Cross-border operations, such as Operation Euphrates Shield and the Afrin offensive, and the progress achieved in the domestic defense industry are the most concrete reflections of this new security concept.

5. A serious blow was delivered to Daesh and major steps were taken in the struggle against the PKK. A new phase was initiated in the fight against FETÖ. A strong purification movement began in the administration.

6. A wave of consensus started to spread through the political arena. The People's Alliance between the Justice and Development Party (AK Party) and the Nationalist Movement Party (MHP) established the framework for mainstream politics in Turkey. This environment of consensus allowed for a greater focus on Turkey's structural problems, its administrative system foremost among them. Within this shift, Turkey transitioned to a presidential administrative system with the elections on June 24.

The Western world did not side with Turkey's people and democracy following the coup. What's more, it used the administration's fight against terror organizations – FETÖ foremost among them – to criticize Turkey. This caused a rise in anti-Westernism in the country. I hope that Erdoğan will finally be seen as an essential part of Turkey's politics and that the West will recalculate its initial reactions to the July 15 attempted coup in the face of this new situation.