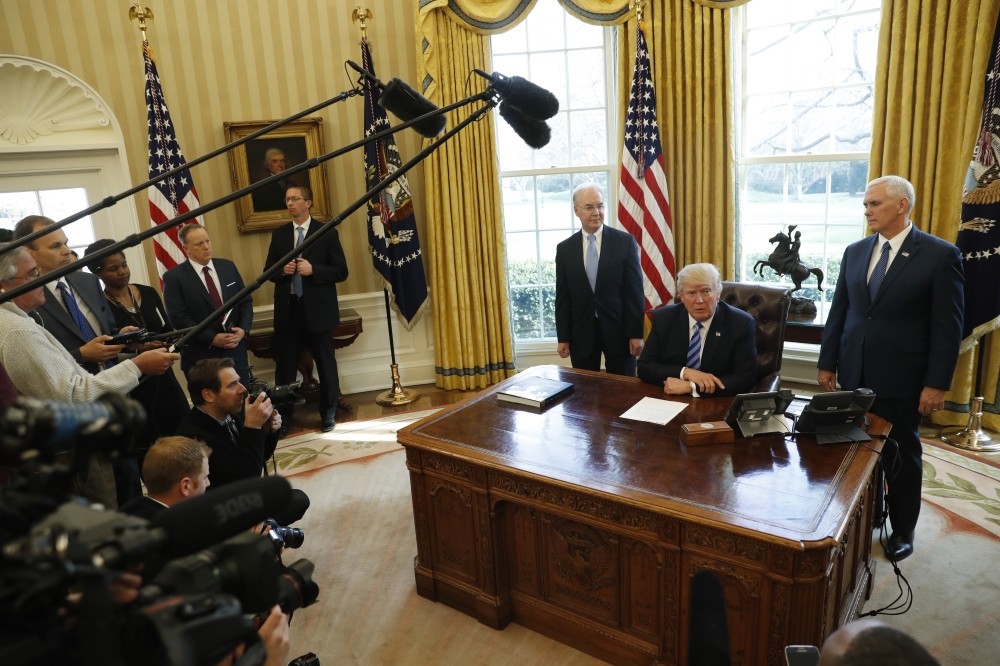 Trump, accompanied by Secretary of Health and Human Services Tom Price (L) and Vice President Mike Pence (R), meeting with members of the media in the Oval Office of the White House, Washington D.C., March 24. (AP Photo)
by Hakkı Öcal Apr 13, 2017 12:00 am

U.S. President Trump needs all the men he can get for some good advice, not a bunch of self-serving Neocons. He should first start by firing some of his closest team members

Now that we hanged the man, we can start trying him, that is how the Texan courts used to work. Apparently, the courts that oversee the U.S.'s national security work that way too, bomb first and develop a foreign policy around it.

Most of the world's leaders agreed that the missile attack on the Syrian airfield that launched the chemical attack on Khan Sheikhoun, killing 87, was an appropriate measure, but it was not enough.

Turkey's Foreign Minister Mevlüt Çavuşoğlu said that if the U.S. intervention is limited only to a missile attack on a Syrian air base, then it is more like a "cosmetic intervention," unless it signals the removal of President Bashar Assad from power.

White House and Pentagon spokesmen keep telling the world that the U.S. would not hesitate to continue attacks, if necessary.

As long as a murderer acts as the president of Syria and the regime that backs him keeps killing innocent civilians, of course it is necessary to continue attacks. But, as we can see, they are not continuing military intervention in Syria. Instead, the U.S. Secretary of State is travelling to Moscow. This visit was arranged hastily when the Russian Prime Minister remarked that the two countries had dangerously come very close to an armed conflict.

Haggling with the Russians

Secretary Tillerson will travel to Russia this week after attending the G7 foreign ministers' meeting in Italy. Before his departure, in a rare show of tough talk, Tillerson called the Russian government "incompetent" due to its failure to remove toxic arsenal from the hands of Bashar Assad following the 2013 deal.

When you face a Russian Foreign Minister and try to discuss subjects like counterterrorism, you need to have a solid perspective on all issues. You must develop a strong negotiation strategy and tactical moves to give and take during the ensuing bargaining.

Moscow and the Russian bargaining methods should not be something new for Tillerson, former CEO of oil giants Exxon-Mobil. As part of his previous job, visited Moscow many times and has proven track records of successfully negotiating numerous trade deals with the Russians. Perhaps, President Trump appointed Tillerson as the Secretary of State precisely because he had this familiarity under his belt. The experience and skills he brings to the table are important features for a state secretary, dealing with foreign ministers of other countries.

However, the question remains whether he has clear-cut policy objectives to prevail in these talks. Not only objectives, but you also need a guiding principle, which experts call a foreign policy doctrine.

Some world leaders are known for consistently and continually sticking to certain targets and methods in foreign policy in such a way that the policies are eventually named after them, as was the case with the Wilson Doctrine and Reagan Doctrine.

On the other hand, some are so inconsistent that their policies are not named, rather such figures they are just described as cunning, deceiving, traitorous, as in the case of President Obama. His policies were willy-nilly at best and two-faced and two-timing at worst.

As Michael Medved, a nationally syndicated radio host recently said, the Trump administration does not have a foreign policy doctrine yet, but thought it was on the right track to develop one.

But, unfortunately for Secretary Tillerson, when he sits with Sergei Lavrov and starts sipping Russian tea, he will not have one ready to guide him. And not only policies, but also the tips and tricks to achieve those policies, guiding principles and most importantly, clearly defined objectives were missing too.In the meantime, there were reports of an infighting in the White House itself, as career bureaucrats along with the President's son-in-law defended a limited strike in Syria, Steve Bannon, the President's chief strategist, who was removed from his National Security Council role last week, was against it.

That is to say the good old U.S. of A. still does not have a clear policy regarding Syria. Does it want al-Assad to remain in power? If not, how does it want him removed? By force or through democratic and fair elections?

If the first elections in Syria could be democratic and fair, guaranteed by the international community, many people believe that Assad and the Baathist structure that keeps him propped up as president will be history. But, the keywords here are "democratic," and "fair," which are two terms that do not sit easily next to the word "Syria" at the moment. How Iran and Russia will manage their favorite killer (Assad) to accept an election that he is not going to win is open to academic discussion.The international community has a long way to go for a fair and democratic election in Syria, where the population has been decimated from 24 million to 18 million because of the seven-year-long civil war.

Turkey has almost 4 million Syrians as refugees while Jordan has more than a million. First the wars should be stopped and the 6 million Syrians should return home. But how?

The foreign policy of any country that has been involved in the events that dragged the region into the chaos it is in today should have discussed this issue with the utmost priority. But, if that country is building airfields to be used by a Marxist-Leninist organization, which is exporting terror and ethnic cleansing to Syria, then one can safely argue that this country does not have the slightest idea on how peace will return to Syria.

Arab newspapers have started calling the U.S. president "Trump the Neocon" for a reason. Obama could have fallen for such an ideology, given the accusations of being a Jihadist himself. With his personal background of living in a Muslim country, and false accusations of believing in Islam before being brought back to the continental U.S.A, Obama might have had a soft belly that he tried to hide by employing Neocons, who see the problem not with terrorism but with the very tenets of the religion. Their anti-terrorism is tantamount to Islamophobia today.

Trump, however, did not have to have them in the state and defense departments. He did not have to agree with them about the future problems of the free flow of oil (and money) from Iraq to the U.S. and its European allies. Redesigning the whole Middle East, dismembering four or five countries in the process, is not what the American people expect from Trump. As he said several times during the campaign, we need peace in the region now. The security of American allies and Israel is not something you can buy from the Egyptian coup leader Abdel-Fattah el-Sissi for $1.3 billion in cash and U.S. financial assistance commitments a decade in advance as credit.

Yes, all friends of the Egyptian people should run to rescue them from al-Qaida and Daesh terrorism, and this could easily be realized by helping them to return to fair and democratic elections. Selling Sissi four German submarines, twenty-four French Rafale fighter jets, and two French Mistral-class amphibious assault ships will not keep them safe from terrorism.

The Europeans and Trump administration are focused on defeating Daesh, and military assistance could be important in this regard. But, Sissi is barking up the wrong tree, in fact, he is killing the tree. The Muslim Brotherhood is not a terrorist organization and jailing their members and leaders is not going to defeat the real terrorists. All the money in the world is not going to make the corrupt Egyptian officers fight the real terrorists. The main reason behind the coup was to remove President Morsi from office, because he was reforming the military. This is another sore point for the nonexistent U.S. foreign policy in the region.

Yet another issue that Trump has no idea about is that elusive Israeli-Palestinian peace — something which four presidents before him could not achieve. President Trump has approached this fragile subject as a bull in a china shop. His erroneous steps started off with the appointment of someone as ambassador to Israel whom you could easily pass of as the Israeli ambassador to the U.S. And talks of relocating the U.S. embassy to Jerusalem not only makes the Palestinians wary of the U.S. government, but all the more adds fuel to the fire of anti-Americanism that is already burning hard-won diplomatic ties developed.

The occupied lands of Ukraine and Georgia, and other issues all over the Caucasus are all waiting for some sort of policy guidance from President Trump, while the madman of North Korea seems not deterred by the Pentagon's old and tired knee-jerk, called "dispatching an aircraft carrier fleet." The man is mad and probably has the button to a thermo-nuclear device in his hands, despite the fact that his delivery mechanism might not be perfect yet.

And we did not even mention all the other madmen in the world. The U.S. president needs all the men he can get some good advice, not a bunch of self-serving Neocons. He may start with firing Steve Bannon first.