Arakan army. Are you kidding? 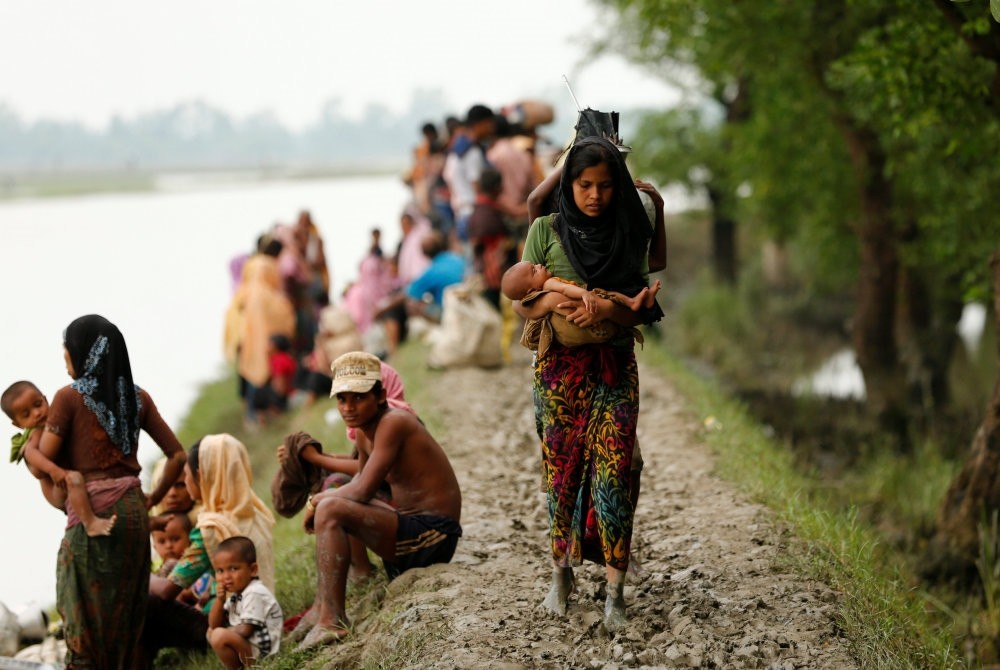 A Rohingya refugee woman with her child walks on a muddy path after crossing the Bangladesh-Myanmar border in Teknaf, Bangladesh, Sept. 7.
by Hakkı Öcal Sep 08, 2017 12:00 am

The drama of the Arakan Muslims didn't start now. Nor has what they call the Arakan insurgency happened in a vacuum

The western media has to find a reason for everything so that their "normal" remains normal. If a government army is massacring a group of unarmed civilian Muslim people, they must have done something to deserve this annihilation. The law-abiding Myanmar Army, who recently restored democracy and let that nice-looking lady with a Nobel laurel on her head become the de facto leader of the country ought not to kill Muslims because they are Muslims.

So, when the plight of the Arakan Muslims finally hit the mainstream media, their editors asked their reporters in the field to find the reason why on earth the peace-loving Buddhists have been killing innocent women and children and elderly men on places that look like swamps of Bengal forests. Well the excuse was already there: Those Muslims who had been subject of Buddhist discrimination for ages had started to organize an army in Saudi Arabia of all places! They call themselves the Arakan Rohingya Salvation Army. What's an army without a proper abbreviation? So they call it ARSA. You can either spell it, or read it as a proper word.

"Clashes erupt periodically between ethnic groups but in the last year, an armed Rohingya insurgency has grown. Arsa has killed more than 20 police officers and members of the security forces. On Aug. 25 it attacked police posts in Rakhine state, killing 12 people in its biggest attack so far. In turn, this prompted a counter-insurgency clampdown from the security forces."

This is from the temple of the unbiased, objective and balanced journalism: the BBC. Their editors shamelessly include this paragraph this very week in a report about the mass killings of 400 women and children and old men. All unarmed, all fleeing in front of the Myanmar Army and their numbers totaling 100,000 since then. Their editors do not even care to ask their reporters to ask the Myanmar Army spokespeople or the press representative of Aung San Suu Kyi, the Nobel Peace Laureate why the government forces are driving the innocent civilians out of their homes into the killing fields instead of going after what they call insurgents.

The drama of the Arakan Muslims has not started now. Nor has what they call the Arakan insurgency happened in a vacuum. Arakan (or with the old name before the military junta changed it in 1989, the Rohang) Muslims are one of the oldest communities of Bengali Muslims. They have been contributing to the culture of their country as well as the Islamic sciences. They have their poets, scientists, authors, storytellers; they trace their ancestry to Arabs, Moors, Moghuls and Bengalis. They settled there during the early "hijrah" (immigration) movement of the Sahaba (Prophet's companions) in the seventh century A.D.

They are not, as the murderous Buddhist ethnic cleansing proponents claim, the illegal Bengali immigrants to Myanmar. They have been part of the Burma nation for many years. The area has been home to countless ethnic groups. With a population close to eight million, Burmese Muslims constituted 20 percent of the people. After years of attrition policies from the Buddhists, their number is now less than three million. The Rohingyas, who were a majority community in Arakan, are now fleeing to Bangladesh through the land mines laid by the Myanmar soldiers.

That is going to change now. President Recep Tayyip Erdoğan, after countless hours of telephone diplomacy, managed to get the United Nations to pay attention to the issue. First lady Emine Erdoğan and her son Bilal Erdoğan, a chairman of a major educational charity foundation, are now in Bangladesh to help the mass exodus of the Rohingyas from Myanmar. Turkey is providing major humanitarian assistance to the Bangladeshi government to host the migrating Rohingyas.

The BBC editors are probably asking why!