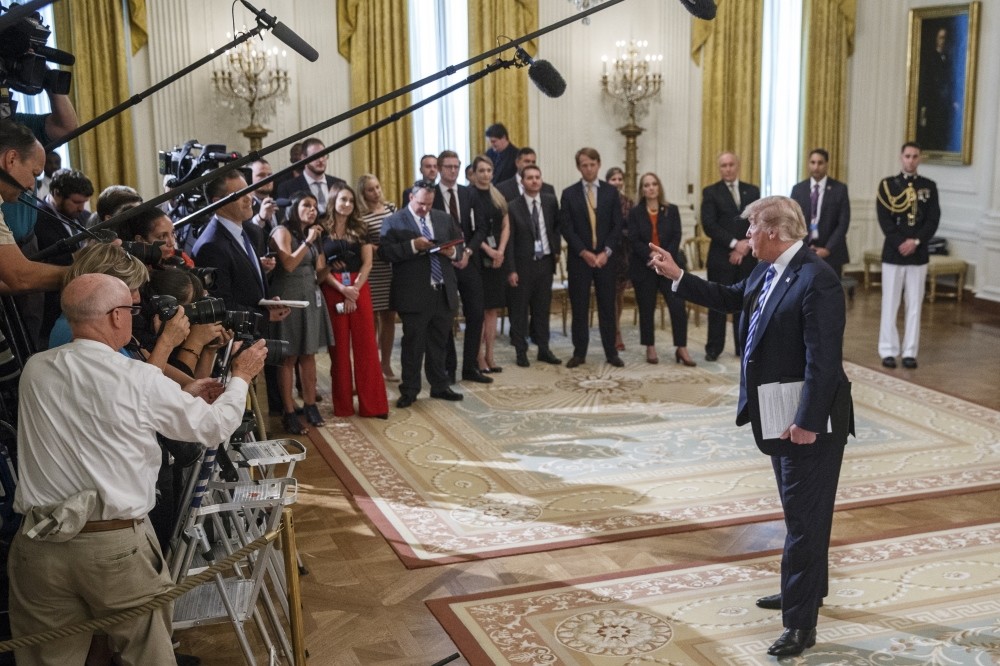 The U.S. deep state has posted its first (and probably the last) warning to President Donald Trump in a rare anonymous Op-Ed essay in The New York Times Wednesday. The author, a senior official in the Trump administration whose identity is known to the editors, clearly shows what the administrative state, which, according to the person who coined this phrase, has always been conservative at heart, has found in Trump: A conservative Republican, who "believes in free minds, free markets and free people" and "has some bright ideas effective deregulation, historic tax reform, a more robust military and more."One can easily deduct the rest of the "bright points" he had for the bureaucratic keepers of capitalism's Holy Grail: a docile politician to appoint its selective members to key points of the visible government – hence, the grown-ups of the cabinet, the generals, the oil executives, former FBI and CIA operatives.

The anonymous author, who appears to be someone from the Cabinet since he gives minute details of the Cabinet meetings, claims that the current improvement in economy and the military was theirs, not Trump's success: "These successes have come despite – not because of – the president's leadership style, which is impetuous, adversarial, petty and ineffective." That is the case simply because the president's "impulses are generally anti-trade and anti-democratic."

The author than lists the vices of the president, "Meetings with him veer off topic and off the rails, he engages in repetitive rants, and his impulsiveness results in half-baked, ill-informed and occasionally reckless decisions that have to be walked back."

He adds, "There is literally no telling whether he might change his mind from one minute to the next" and "an Oval Office meeting at which the president flip-flopped on a major policy decision he'd made only a week earlier…."

The author's final point is this: "The result is a two-track presidency… Take foreign policy: In public and in private, President Trump shows a preference for autocrats and dictators, such as President Vladimir Putin of Russia and North Korea's leader, Kim Jong Un, and displays little genuine appreciation for the ties that bind us to allied, like-minded nations… the rest of the administration is operating on another track, one where countries like Russia are called out for meddling and punished accordingly, and where allies around the world are engaged as peers rather than ridiculed as rivals."Nothing can summarize what is happening between the U.S. and Turkey better than this short paragraph: The president and his secretaries promise one thing – "We understand Turkey's security concerns" and a road map agreement to avert crisis in Syria's Manbij, for example – but the U.S. Central Command (CENTCOM) in Syria does another; such as delivering 5,000 truckloads of heavy weapons to the groups Turkey has been concerned with and producing nothing in Manbij other than useless joint road patrols around the town. NATO officials truly value President Erdoğan's frankness and sincerity in the summit meetings but next week the U.S., the real boss of NATO, slams illegal sanctions on his country. One can cite a score of confusing examples of this confusing duality emanating from the U.S.

Another example of the U.S. speaking from the both sides of its collective mouth is the denying Turkey the Patriot missile system. Despite the proven shortcomings of the communications, command and control, radar surveillance and missile guidance subsystems of the Patriot system, Turkey decided to purchase this modular and highly mobile weapon. Lo and behold! The ally of 70 years said no!

What's a country to do when it needs a mobile air defense system? Go shopping. The most available seller is your next-door neighbor, and you buy from them. This is another manifestation of the trap which says; "If you don't buy from me you cannot buy from anyone else and I ain't selling it to you."

Now we know from the inside – be it an anonymous secretary of some department – why Zarathustra keeps speaking like this.