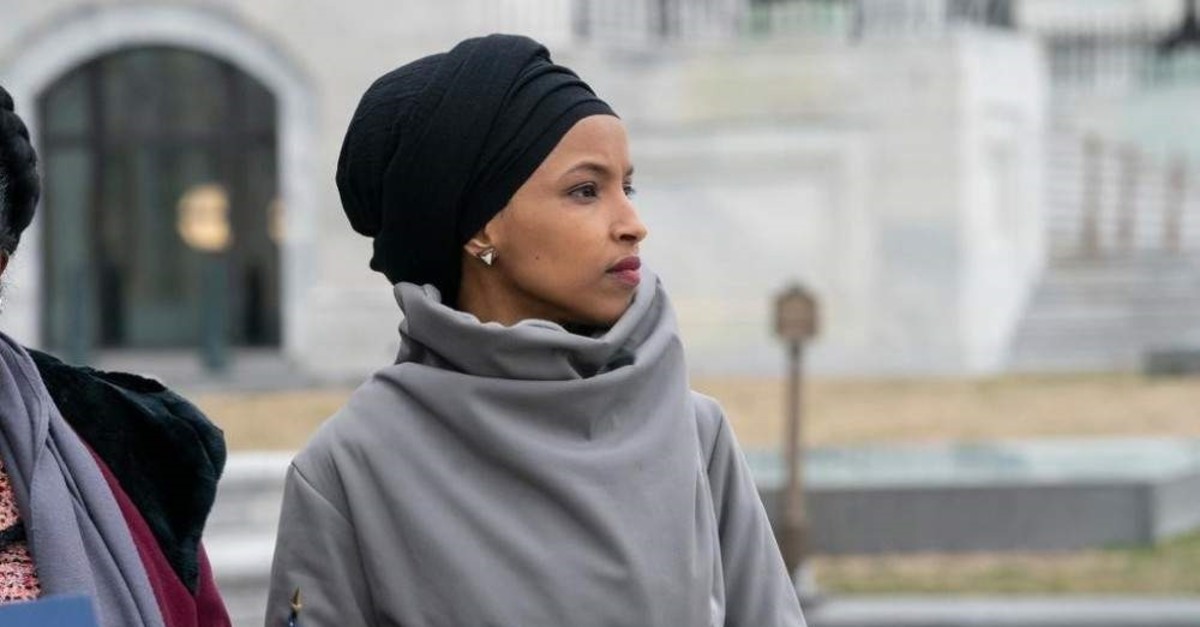 U.S. Rep. Ilhan Omar outside Capitol Hill in Washington D.C., March 8, 2019. (AP Photo)
by Hakkı Öcal Nov 18, 2019 1:38 am
If I were planning the joint reception of the U.S. and Turkish presidents and senators at the Oval Office, I would make an exception and ask Ilhan Omar, a representative for Minnesota's 5th congressional district, to attend and listen to President Recep Tayyip Erdoğan.
Ms. Omar has been the target of several death threats and she has been harassed by her political opponents; President Donald Trump has singled her out as a major critic in the group he termed "The Squad.” Omar has been a really effective member of Congress. However, Trump ripped her as a "fraud and "disgrace" a month ago when she condemned him for spreading “lies that put my life at risk.” I am not sure whether she would actually come to the Oval Office when Trump is still there, but I would like her to listen to Erdoğan answering the questions of the senators.
Ms. Omar is an economic immigrant coming from Somalia with her family to the U.S. seeking a better standard of living. The journey could not have been an easy one for a 10-year-old kid, but her grandfather’s family was an affluent one, if not very rich, having fled his country which was at the risk of civil war. Her early years in the U.S. were not happy ones either. Her father worked as a taxi driver first, and later in the U.S. Post Office.
Ms. Omar never sought shelter from dropping barrel bombs. She never crossed border areas mined by her own government. She never sought the help of the soldiers of a neighboring country where she was fleeing to. She had a brief period of the camp experience - and any refugee camp experience is terrible no matter how brief it is. But her camp was not constantly bombed, and she was never left to the mercy of the neighboring country. Turkey, as such, saved more than 4 million people who were trying to escape from their own government or their own kinsmen who claimed to be carving a country for themselves.
Imagine that you and your family, actually all the people of the same ethnic origin, have been denied citizenship and everything that comes with it: schooling, civil service, public support, a passport, a social security card and the right to open a bank account. The kinship relations (a community of identical geographic descent) could not replace all these necessities but provided some of them, including schooling. After the civil war and the bombing by Bashar Assad's regime started, Syria's Kurdish community would run to the towns where there was a concentration of Kurds. But Syrian Kurds came across strange people who could not even speak their language. Those were PKK terrorists from Turkey; they demolished all the houses of worship. They confiscated everything the Syrian Kurds had. They had conscripted 12-year-old boys to serve as soldiers of their cause. Those strange people who came from the north impounded houses, land and women’s jewelry. They had their own leaders, their own flags. They said you are now part of those “cantons” which would be part of the "new Kurdistan" after the war with the Daesh terrorists.
Ms. Omar should know that Trump is right about one thing: those terrorists were created by the previous administration of her adopted country. That the previous administration had created Daesh had belonged to the same political party she is affiliated with should not blind her eyes. There are many layers of that political establishment that she won’t comprehend ever! She has seen only the tip of the iceberg in Minnesota's 5th congressional district. There are many more corporate folds she could never know about.
In short, Turkey is not crushing any Kurdish people anywhere. Not in Turkey, not in Syria. The monthly salaries of the Kurdish Regional Government (KRG) in Iraq had been paid by Turkey for a long time. The basic health care expenses of many Syrian Kurds have been provided by Turkey as we speak. There are 400,000 Syrian Kurds who fled the People's Protection Units (YPG).
I wish Ms. Omar were there when President Erdoğan told them what the YPG really was. Her misplaced support of the YPG hurts us as much as YPG terrorism.