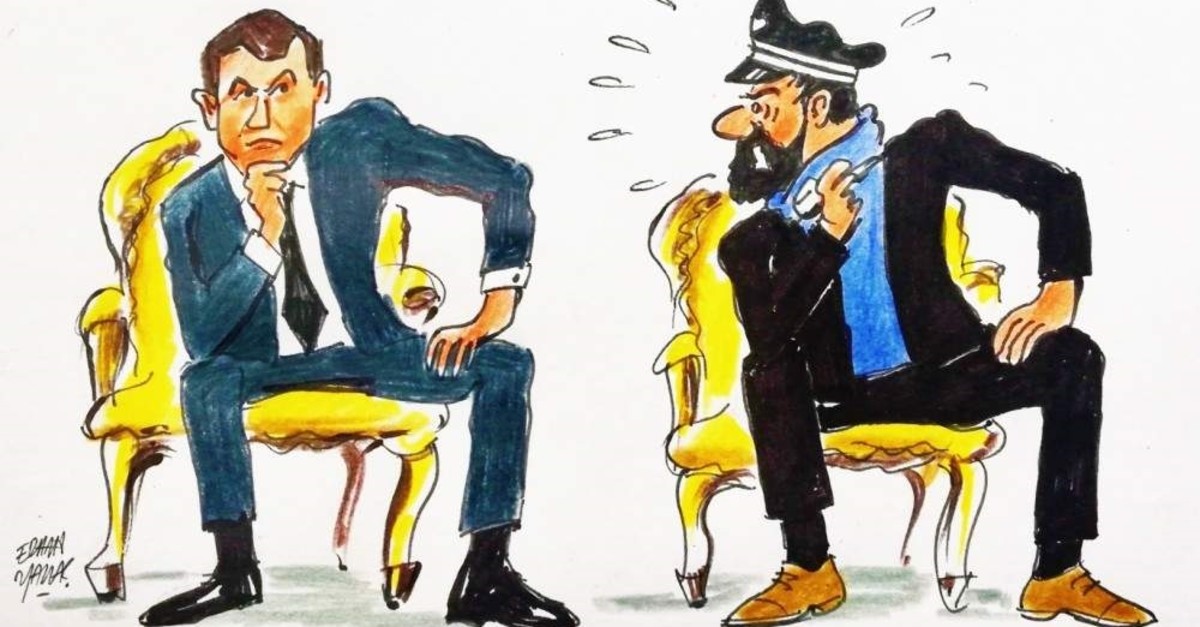 by Hakkı Öcal
Dec 09, 2019 12:35 am
Monsieur Macron must have learned the proper way to sit from Capitaine Archibald Haddock. For those unaware, Haddock was the name of the retired sea captain who was friends with famed journalist and adventurer Tintin. The creator of the Belgian comic series, cartoonist Hergé, often depicted the drunk captain sitting upright with one hand resting on his armrest and the other, either clenched in a fist or pointing an accusatory finger at the person in front him.
Our own Capitaine Macron spent around 10 full minutes sitting before Trump in the exact same way. According to guides on interpreting body language, this gesture (which I am willing to bet made both arms go numb by the end) indicates a certain level of aggressiveness and domineering. They say body language is the key to revealing our inner-most feelings; and if one unlocks the meanings of the various signs, one can read a person like a book.
That said, Capitaine Macron seemed to give the impression of not only being mad as hell with Trump – who had trashed him only a couple of hours earlier due to his likening NATO to a brain-dead person – but also with President Erdoğan, who suggested that Macron should have checked his own brain before worrying about that of NATO.
I agree that any young politician who is still continuing his on-the-job-training would be angry about such jibes. However, our Captain Haddock’s deflated mood runs a little deeper:
France took not one but two kicks in the backside out over Syria – from both Trump and Erdoğan.
If you remember your history, it was the British civil servant Mark Sykes who signed an agreement with French diplomat François Georges-Picot over the fate of the soon-to-be-defunct Ottoman Empire in Syria and Iraq. The two had agreed that the British would take the beautiful Mediterranean seaside of Lebanon and Syria and the French would take the sands of the Iraqi desert. The French government didn’t like it; but they could do nothing since they were in need of the Brits’ help. They swallowed their pride. Unbeknownst to them, however, the British army soon discovered oil in Iraq and thus switched the loot, offering the beautiful shores of Syria and Lebanon to the French in lieu of the sands and oil of the Euphrates! That was the first loss of the French connection.
After all these years, taking the advantage of the turmoil created by the U.S. in Syria but staying behind the shadows of the G.I. Joes, the French established a renewed link to the Levant. They exported cement factories; they helped the PKK-linked group, the Democratic Union Party (PYD) and its armed wing, the People's Protection Units (YPG), to create their own “statelets” on Syrian soil. Even before the U.S. voiced support, France announced its intention to recognize the so-called Kurdish canton under the name “Rojava.” This violation of international law represented an attack on the territorial integrity of Syria and offended Turkey in its recognition of an entity run by a terrorist organization.
Turkey, however, defended its rights in hot pursuit of the terrorists and sent its armed forces to flush the group out of Syria; the U.S. and Russia both approved of the move. Not only that, President Trump had U.S. forces withdraw from the Turkish border area. The PYD/YPG terrorists totally lost their hegemony across northern Syria: The regime of Bashar Assad and his Russian and Iranian allies have since begun controlling the lands once occupied by the terrorists.
What is Monsieur Macron to do? He cannot send troops to replace the U.S. soldiers; he cannot find a Kurdish “state” to donate another cement factory to (the first is now in the custody of Syrian National Army). In fact, all he can do is what a good Frenchmen does: Open a theoretical discussion on the ontological and epistemological definition of “terrorist.”
Thus, the second French connection has been lost, too!
It has been 100 hundred years since the Skyes-Picot agreement and, yet again, the French met in London to discuss Syria – this time with the British and the Germans.
However, this time, the heir of the empire that they had met to plan the dismemberment of 100 years ago in the very same building was now sitting across the table and teaching them the definition of terrorist.
Captain Haddock would surely have gone ape, too.
Last Update: Dec 20, 2019 2:14 am