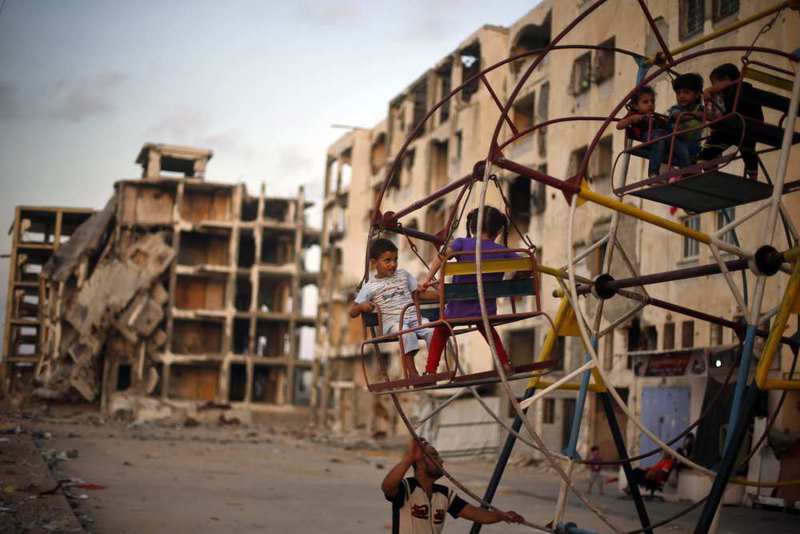 Palestinian children enjoy a ride on a ferris wheel near residential buildings destroyed by Israeli bombs in Gaza.
by Hatem Bazian
Aug 03, 2015 12:00 am

The Israeli government's ‘three monkeys role:' Acting as if it is providing military and financial sources to the Israeli settlers to force the Palestinians from their land

A year ago, a 16-year-old Palestinian boy, Mohammed Abu Khdeir, was burned alive by Israeli terrorists in Jerusalem in a "price tag" revenge killing. The horrific burning of an 18-month-old toddler, Ali Saad Dawabsheh, due to an arson attack by racist settlers on the family home in the village of Duma, marks Abu Khdeir's one year anniversary. Graffiti was left on the wall reading "revenge" and "long live the Messiah king" in Hebrew, a calling card for racist settlers. Ali's parents and older brother are all in critical condition in hospital with burns covering 70 percent of their bodies.

Israeli Prime Minister Benjamin Netanyahu in a statement said: "I am shocked over this reprehensible and horrific act," but these words are empty and meaningless since his government continues to extend unlimited military protection and financing to settlers and settlements. The attack is part of a larger "price tag" terror campaign directed at Palestinians and their property, including violence and arson attacks on churches, mosques and crops.

Current attacks by settlers are not exceptions, but the norm in Zionism's long history of structured violence targeting Palestinians. From the 1930s up to the present, Zionist settlers have orchestrated terrorist bombing campaigns, planted explosives in cafés, homes and hotels and burned crops. The 1948 Nakba was the high point in Zionist violence with over 68 methodical and deliberate massacres carried out to ethnically cleanse Palestine of its Arab indigenous population.

The time has come to confront Zionism and Israel's governmental infrastructure that empowers the settlers to burn children, churches, mosques and trees. Since 2001, Zionist settlers have carried out over 11,000 attacks on Palestinians and their properties, which must be understood in the context of the Israeli government encouraging settlements to force Palestinians off their land. The current Israeli government supports expanding settlements in the West Bank by moving upwards of 650,000 Jewish settlers illegally into the Occupied Territories in violation of the Fourth Geneva Convention.

When was the last time Israeli police arrested and prosecuted a settler for burning a church, mosque, house, tree or car in the past five years? Assuming that such arrests do take place, then how long is the sentence handed down and are they forced to pay compensation for damages? This is also the one-year anniversary of the assault on Gaza that witnessed the killing of 2,220 Gazans, and 1,492 of them were civilians, including 551 children and 299 women. Will Israel be held responsible and will Netanyahu express "shock" regarding the 551 children killed!

The Israeli human rights group Yesh Din's 2015 report concluded: "Israeli law enforcement authorities exhibit criminal negligence when it comes to handling ideological crime against Palestinians." This means that racist settlers are protected by the state and that the burning of Mohammed last year and now Ali is paradigmatic of this institutional shielding. The report points out "only 7.4 percent of police investigations" dealing with "offenses committed by Israeli civilians against Palestinians and Palestinian property have resulted in indictments against the suspects." Yesh Din correctly labeled police actions as "mock investigations."

Recently, the settlers scorched the Church of the Multiplication of the Loaves and Fish at Tabgha near Tiberias, which was the 18th such attack on a church or mosque in the past four years. Let's ask Netanyahu as to how many of the 18 arson attacks on religious institutions have been solved, how many people have been arrested and what prison sentences did they get? The answer is none - and don't expect a right wing Israeli government beholden to the settlers to do anything other than supply the kerosene in "price tag" attacks.

Last year, Israeli settlers from the Eli settlement attacked agricultural lands in the village of Qaryout south of Nablus and burned olive trees, while the army stood by and protected the settlers once the village residents came to put out the fires. The army knew the attackers and provided protection in the middle of the night, while preventing fire trucks from entering the village. Had Netanyahu instructed the Israeli army to arrest and prevent such "price tag" attacks then his "shock" on Ali's burning might be taken seriously.

Last June, Jamma'in village in the Nablus region was attacked by settlers who managed to cut down 60 Palestinian-owned olive trees using chainsaws. Meanwhile, in the village of Burin settler arsonists from the Yitzhar settlement attacked and set ablaze olive groves destroying over 200 trees in 2011. The Israeli army in each case protected the settlers and used tear gas against the villagers attempting to rescue their trees.

For sure, the settlers burned Ali, but it is Netanyahu and successive Israeli governments that provide the kerosene, funding and protection for racist thugs to unleash a reign of terror. The time is now to provide international protection for Palestinians and for the International Criminal Court to prosecute, as war criminals, those responsible for the assault on Gaza and "price tag" attacks on civilians.
Last Update: Aug 03, 2015 9:34 am