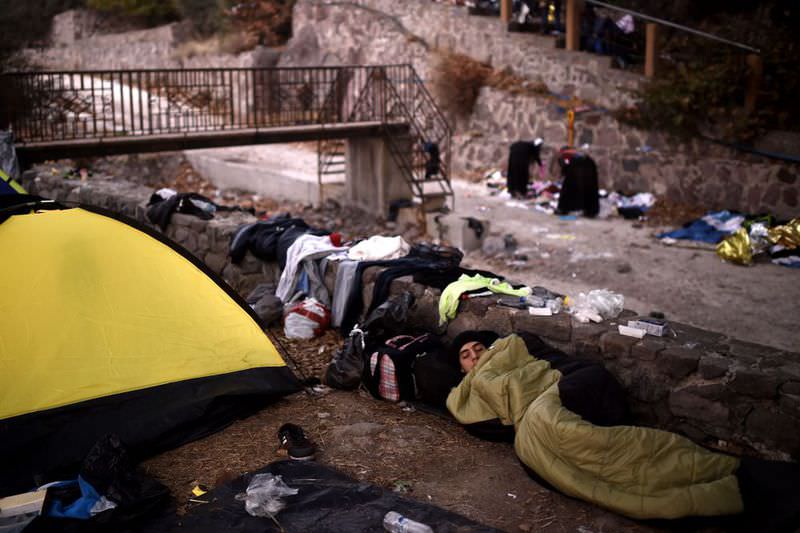 NATO and the EU has to pay attention to Ankara's proposal to establish a safety zone in northern Syria to end the growing Syrian refugee crisis.
by Hatem Bazian Oct 08, 2015 12:00 am

The U.S. continues to struggle to solve the ongoing historical problem of racism against minorities. However, this racist discourse has now taken the turn "against Muslims and immigrants"

U.S. history is filled with demagogues who made it into public office using racism, bigotry and anti-immigrant sentiments as a campaign theme, paving the way to power. Power and racism in America are congenital twins. California had a long entanglement with demagogues and none more critical than the period that gave birth to the Chinese Exclusion Act of 1882.

The passage of the act was the culmination of a long period of racist rhetoric that was deployed by political figures against Chinese immigrants. Indeed, the decade prior to the passage of the Chinese Exclusion Act witnessed the massacre of 18 Chinese people in Calle de los Negros (Street of the Negroes, also known as "Nigger Alley") in Los Angeles in 1871. On Oct. 24, 1871, a 500-man mob entered Chinatown and attacked, robbed and murdered 18 people, going down as "one of the largest incidents of mass lynching in U.S. history." A few years after the passage of the act, the Rock Springs massacre took place on Sept. 2, 1885, with 28 Chinese workers being murdered and 75 homes being burned down in the little mining town in Wyoming.

The California Gold Rush and the need for a labor force, in particular, drove Chinese immigration to America and the West Coast to speed-up the building of the Transcontinental Railroad. However, politicians targeted the Chinese immigrants and blamed them for whatever ills had befallen the economy, redirecting public anger in the aftermath of the Civil War and away from assessing the real causes for the recession in the country.

The now tolerant and progressive San Francisco witnessed the rise into prominence of labor leader Denis Kearney leading his Workingman's Party into a full racist assault on the city's Chinese community. Kearney and California Governor John Bigler frequently used derogatory, racist language to describe Chinese immigrants and worked to foment fear among voters. Vigilantes of the Supreme Order of Caucasians assisted both in their political endeavors.

Similarly and during the same period, African Americans were subject to an intense lynching campaign intended to arrest any social, political and economic benefits that were accrued as a result of the end of slavery. The Equal Justice Initiative documented 3,959 victims of lynching in 12 southern states between 1877 and 1950. Lynching and anti-Chinese violence was about white supremacy and political figures claiming public space, economic opportunity and social structures by targeting marginalized communities. Often anti-Chinese violence and the lynching of African Americans are seen as a separate phenomenon with each having its own reasons or causes; however, they should be seen as emerging from the same racist epistemic and represent continuity. In the Chinese and African American cases, racist politicians and populist demagogues managed to steer a fearful public concerned for its wellbeing and future in the middle of economic uncertainties into bigotry and vigilante violence.

Racist politicians and populist demagogues have taken today's American political discourse hostage and are utilizing venomous rhetoric to climb into seats of power regardless of the consequences. Attacking Muslims over terrorism, Latinos over immigration and African

Americans over crime is the work of politicians and media talking heads skilled at using racism as a cover to express concern for the country.

In an effort to win the White House, a number of Republican candidates have chosen to unleash racist venom to poison an already fearful and economically distressed public. Just as violence against Chinese immigrants and African Americans was preceded by racist and xenophobic rhetoric, the current environment in America does not bode well for targeted communities. Demagogues hide behind the defense of free speech and opposition to political correctness, while using distorted patriotism to exclude and verbally suffocate already silenced minorities.

Conniving politicians knowing the electoral map all too well and increasingly lacking the voting numbers to win opt for a divide and conquer strategy, while seeking assistance from media personalities peddling a toxic mix of ignorance and racism. Joseph Goebbels of Nazi Germany would be impressed by the sophistication achieved in designing and executing the propaganda campaigns. Goebbels articulated almost a century ago: "It would not be impossible to prove with sufficient repetition and a psychological understanding of the people concerned that a square is in fact a circle. They are mere words, and words can be molded until they clothe ideas and disguise."

The effect of demagogues capturing civil society is visible in the increased overt racist discourse against minorities, repeated violent attacks on religious institutions belonging to African Americans, Muslims, Sikh and others and targeting dissenters as unpatriotic. It is not a coincidence that as demagogues take to the airwaves, TV stations and website are showing more and more brown and black bodies falling in the streets. Demagogues and media propagandists provide the venomous words that mobilize the ignorant and the mentally unstable to use bullets and violence to put blood and flesh to their otherization ideas. The time is right to confront the demagogues and reclaim civil society for decency, inclusiveness, equality, fairness and justice for all.
Last Update: Oct 08, 2015 3:42 pm
RELATED TOPICS